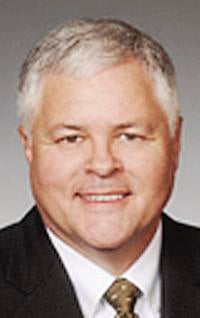 JONESBORO — A judge in Little Rock has thrown out a lawsuit filed by two state representatives from Jonesboro and two local residents who claim Gov. Asa Hutchinson’s health secretary exceeded his authority in dealing with the coronavirus pandemic.

Pulaski County Circuit Judge Wendell Griffen ruled Wednesday that Health Secretary Jose Romero, acting under an emergency declaration by the governor, acted within the powers delegated to him by the Arkansas General Assembly.

Representatives Dan Sullivan and Brandt Smith were among 18 lawmakers who brought the lawsuit, on Sept. 3. Iris Stevens and James David Haigler, both of Jonesboro, were among seven private citizens who also signed onto the court challenge.

Their attorneys, Travis Story and Gregory Payne of Fayetteville, contended that the authority and rules that the Legislative Council approved in November 2019, “were based on the best reasonably available scientific evidence at the time they were adopted” by the state Board of Health in April 2018. They argued COVID-19, the disease caused by the novel coronavirus Hutchinson cited March in declaring the emergency, didn’t exist at the time legislators approved the rules.

But in a hearing Wednesday, Griffen saw it differently.

“The Arkansas State Board of Health Department of Health promulgated Rules pertaining to Reportable Diseases in April 2018 which were reviewed by the Legislative Council, approved by that body in December 2018, and which took effect in January 2019,” Griffen said in docket notes posted online. “The 2019 Rules explicitly included ‘novel coronavirus’ among the reportable diseases.The parties agree that COVID-19 is a novel coronavirus. Novel coronavirus is specifically included in the 2019 Rule promulgated by the Board of Health and approved by the Legislature.”

Reacting to the decision, Hutchinson said he appreciated Griffen’s quick decision in the case, as Sullivan’s team requested.

“Particularly whenever we’re seeing high hospitalizations and a continued number of high cases, we want the public to have confidence in the emergency rules that we put into place,” Hutchinson said. “The judge found very clearly, without hesitation, that every action we’ve taken is pursuant to the authority that the general assembly has given to us and that is necessary in this emergency.”

Craighead County had the highest number of new coronavirus cases in the state Wednesday, while the adjacent counties of Greene, Poinsett, Lawrence and Mississippi also ranked in the top 11.

Chris Gamble, owner of Gamble Home, stands inside the old Sears building, which he and fellow businessman Ted Herget bought this week.

JONESBORO — The coronavirus pandemic and March 28 tornado have created major changes in the region’s business climate – much of it bad.

But this week, the owners of two businesses hard hit by the tornado took steps to revitalize the old Sears building on Caraway Road at Highland Drive.

Chris Gamble, owner of Gamble Home, and Ted Herget, owner of Geared Outfitters, closed on the purchase Tuesday from Memphis developer Marty Belz. The two local business leaders agreed to pay $4.9 million for the 82,000-square-foot building and the 5.8 acres of land on which it sits, Haag Brown Commercial announced.

“Since both me and Ted’s mall stores got hit by the tornado, this was just a good fit for me and Ted to team up together and bring something else local to our local community,” Gamble told The Sun. “We’re going to occupy about 35,000 feet and Ted’s going to occupy approximately 20,000 and then we’re going to have about 25,000 left over to sell. Hopefully, another local tenant will come in with us and do it.”

Herget said he and Gamble had grown impatient, with no information from the owners of The Mall at Turtle Creek. When Gamble gave him the chance to partner on the Sears building, he didn’t hesitate.

“Chris is a great guy to work with,” Herget said.

As he has done with his original Jonesboro store on the Farville curve, Gamble said he and Herget plan to convert part of the massive parking lot into a space for community events.

“We’re going to be tearing out over half of the parking lot out here and making a community area for the grassy area to have community events on the property,” Gamble said. “... We’re going to make it a destination shopping. We’re probably two of the largest local people in the area that give back to the communities, and this was just another way to give back to a community that’s helped us grow our businesses over the years.”

The stores are expected to open in the spring of 2021, Gamble said.

“We want people to come to our community and shop and not go to Little Rock or Memphis,” Herget said, adding that Jonesboro has lost a lot of those customers since the tornado.

Herget said his new store will employ about 30 people, up from the number he employed at the mall.

Also, as a result of the tornado, Gamble acquired the former Price Chopper building at Trumann to serve as a distribution center to supply all of the stores.

“This is the most meaningful retail transaction for Jonesboro in the last decade,” Brown said in a news release. “You have two locally cultivated Jonesboro businesses joining forces to purchase and invest in the single most important retail building in the city’s history.”

Sears was one of the original stores in the Indian Mall when it opened in 1968 and it was the last store to close in 2017.

Gamble said it may appear to be a big investment and big risk for he and Herget, but he believes time will show it to be a bargain buy.

“Traffic patterns change, but this will always be a hot corner,” he said. “It was 50 years ago and it is today.”

Layla Westbrook, a sixth-grade Nettleton Steam student, designs a prototype of astronaut gloves that would be worn in space.

JONESBORO — This year, Nettleton STEAM students are shooting for the stars.

STEAM is all things NASA on every grade level this year, and for good reason, too. STEAM Principal Cathelene Gray said the school was presented with a once-in-a-lifetime opportunity this summer, and are anxiously awaiting to hear the results.

“This summer, we found out about a NASA proposal,” Gray said. “If we wrote a proposal, and if we were accepted, NASA would send us a flight downlink and the students at the school would get to meet the astronauts and have a live question-and-answer session.”

No other school in Arkansas has ever received a downlink from NASA, which will enable students to communicate in real time with astronauts on the International Space Station.

Gray said the proposal has been submitted and administrators are waiting to hear back from NASA on a date the students will be meeting with astronauts.

“I designed this with using NASA lessons already available,” Cochran said, noting each grade takes a year-long essential question and tries to find solutions, Cochran said. Every subject is incorporated into the lessons.

As the event has begun to unfold and community partners learned of it, it has had a snowball effect in the state.

Arkansas PBS will be doing a documentary on the NASA downlink and the NASA curriculum, involving students in the filming process.

“We drew a storyboard for us to show professional development for all teachers in the state. This gets the message out about project-based learning,” Gray said. “This will also include footage of the NASA downlink event.”

Arkansas PBS will be on site at STEAM to broadcast the NASA downlink event all over the state.

“I have been working with Kelli since she is the curriculum director, and we will be doing Zoom calls with students and faculty,” Reeves said. “We will release a series of interviews tackling different aspects of this project.”

STEAM educators have also reached out to include Jan Paschal, founder of Every Child is Ours, to include partner schools in Kanana, South Africa, Acuna, Mexico, Pine Ridge, S.D., and Tilton, N.H., with whom Paschal works with directly.

“When they asked us to be involved we were so excited,” Paschal said. “We want to always offer the kids a way of looking at things they wouldn’t normally be a part of,” she said. “We are very eager to work with them.”

Gray said they are trying to make the event available internationally and let all the children participate. She plans on allowing children across the state who choose to participate and view the live event to submit questions.

“We will pick the top five questions,” she said.

Cochran said this is going to be a once in a lifetime event for students.

“It’s amazing to think about everyone getting to talk to the astronauts,” she said. “We want to share this with everyone. It gives me chills thinking of the possibilities.”

The federal indictment alleges that Palmer successfully got two minors to send him photos or videos of “engaged in sexually explicit conduct” and he attempted to do that same with another child, according to a press release from Cody Hiland, United States Attorney for the Eastern District of Arkansas.

The ongoing probe is being investigated by the FBI, with the Jonesboro Police Internet Crimes Against Children Division and Arkansas State Police Criminal Investigations Company. Palmer was arrested Oct. 9.

“At this point in time, federal investigators have not identified any alleged victims in the Northeast Arkansas area,” Hagan said.

“She’s wonderful. We’re very excited to be partnering with her and hopefully, putting Mr. Palmer away for a number of years for his alleged crimes,” he said.

The FBI is concerned during the ongoing coronavirus pandemic, as more children are staying home and using several cellphone applications parents may be unaware of, Hagan said. Because of this “the victim pool” has expanded for predators, he said.

“Predators lurk. They hang out there. They actively seek out minors to … abuse and obtain child pornography. It’s really sickening,” Hagan said. “If parents or other kids think they know of potential threats or potential predators that they’ve encountered, … we urge everyone to come forward.”

If convicted, Palmer faces 15 years to life imprisonment for each charge. The charges also carry a fine up to $250,000 and at least five years of supervised release.

Neither the FBI nor the U.S. Attorney’s Office disclosed where Palmer is being held.

JONESBORO — It’s not a top 10 list anyone wants to be part of, but five Northeast Arkansas counties were among the 11 counties with 20 or more new coronavirus cases Wednesday.

Once again, Craighead, with 66 new confirmed cases, led the state. Greene County was fifth with 26, followed by Poinsett County with 24, Lawrence County with 22 and Mississippi County with 21.

The state had 884 confirmed new cases statewide, the Arkansas Department of Health reported. The death toll rose to 1,484 with the addition of 21 on Wednesday.

A judge earlier Wednesday dismissed a lawsuit by 18 legislators, including Jonesboro representatives Dan Sullivan and Brant Smith, who challenged the governor’s authority to impose restrictions on businesses and require people to wear masks whenever social distancing isn’t possible.

Hutchinson said his directives are important tools in the fight to prevent the spread of the virus. He pointed to success in Washington County, a previous hot spot in the state.

“We’ve proven it works and people do adopt compliance with the guidelines because they see that it does work and that it is necessary,” the governor said. “Craighead County needs to make sure they do everything they can to stop the spread to protect themselves and others.”

Hutchinson said he has talked to Craighead County law enforcement officials and they understand the need for educating the public as to the guidelines.