JONESBORO — Nettleton Public Schools announced late Monday afternoon that Fox Meadow School of Creative Media will be closed starting today until Thursday, Oct. 22, due to a lack of educators.

Many teachers at the school have had to be quarantined.

Nettleton Superintendent Karen Curtner said the administration has been watching the numbers closely for some time.

“We knew the numbers were coming up last week as far as teachers being out,” she said.

An additional four educators were added to the quarantine list Monday, forcing the district to announce they were pivoting to virtual learning.

“I wish we had given parents more time (to prepare),” she said.

So far, there are 32 students, 10 educators and three paraprofessionals in quarantine, Curtner said.

“They are mostly just quarantined due to someone else testing positive,” she said.

Fox Meadow School of Creative Media is the second school to close in the area due to the pandemic. All other schools within the Nettleton School District were to remain open.

Douglas MacArthur Junior High, a Jonesboro School District junior high campus, was the first school to shut its doors and pivot to remote learning beginning Sept. 23 until Oct 5. At that time, the district had nine active COVID-19 cases and 152 students quarantined.

“One educator did test positive today,” she said, noting the issue is quarantined educators and a lack of substitutes to fill the positions.

The Fox Meadow School of Creative Media school office will remain open, and Curtner said support services will still be available to students. Lunches will also continue to be served, and parents can pick those up at Nettleton Student Support Services at 2305 Promise Lane in Jonesboro beginning today from 12-1:30 p.m. 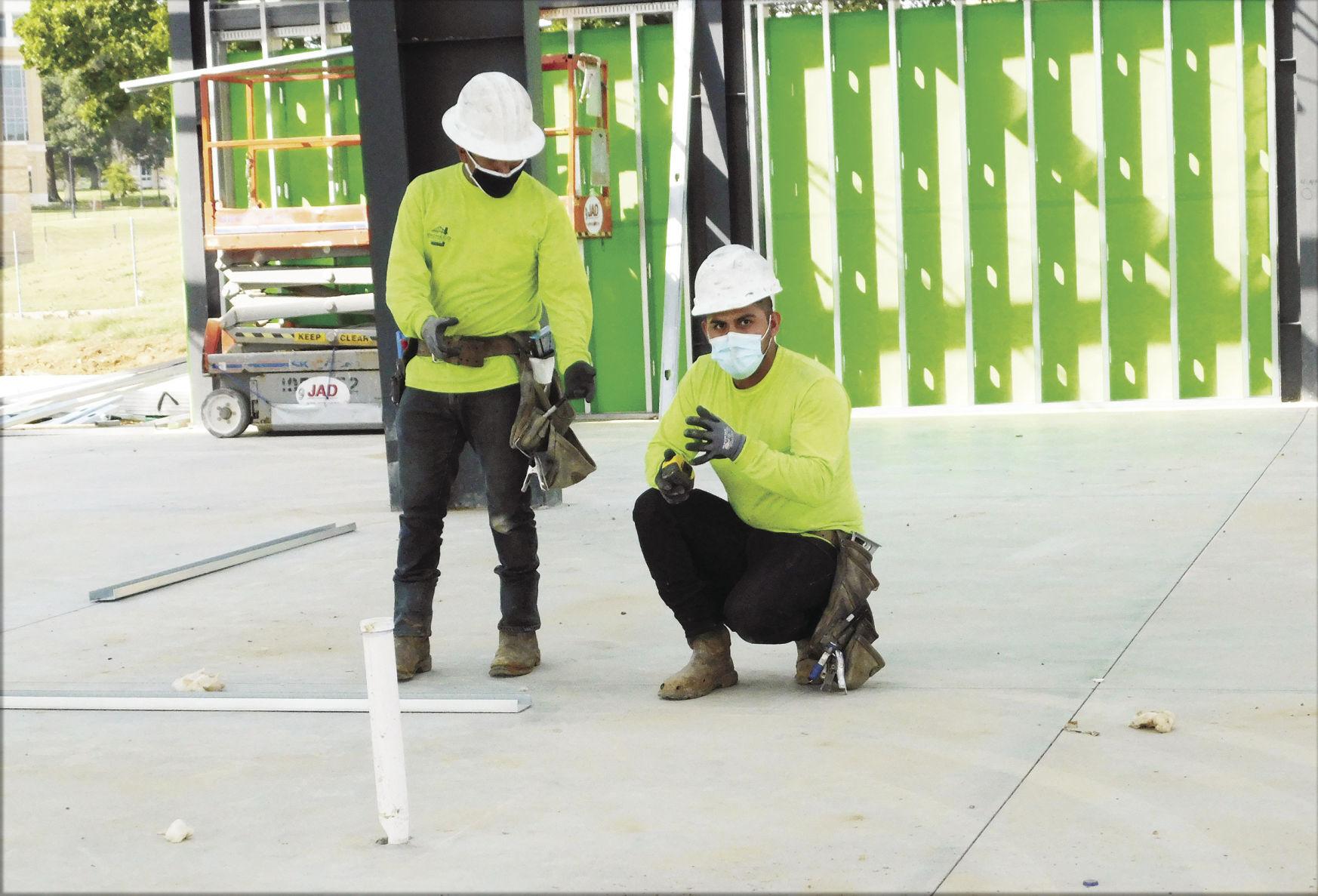 Construction workers with Command Construction out of Searcy work to construct a mechanical transformer that will be installed as part of the Windgate Center for Three-Dimensional Arts that is being built at Arkansas State University. The project is set to be completed in April 2021 and was made possible by a $6.7 million grant by Windgate Foundation. 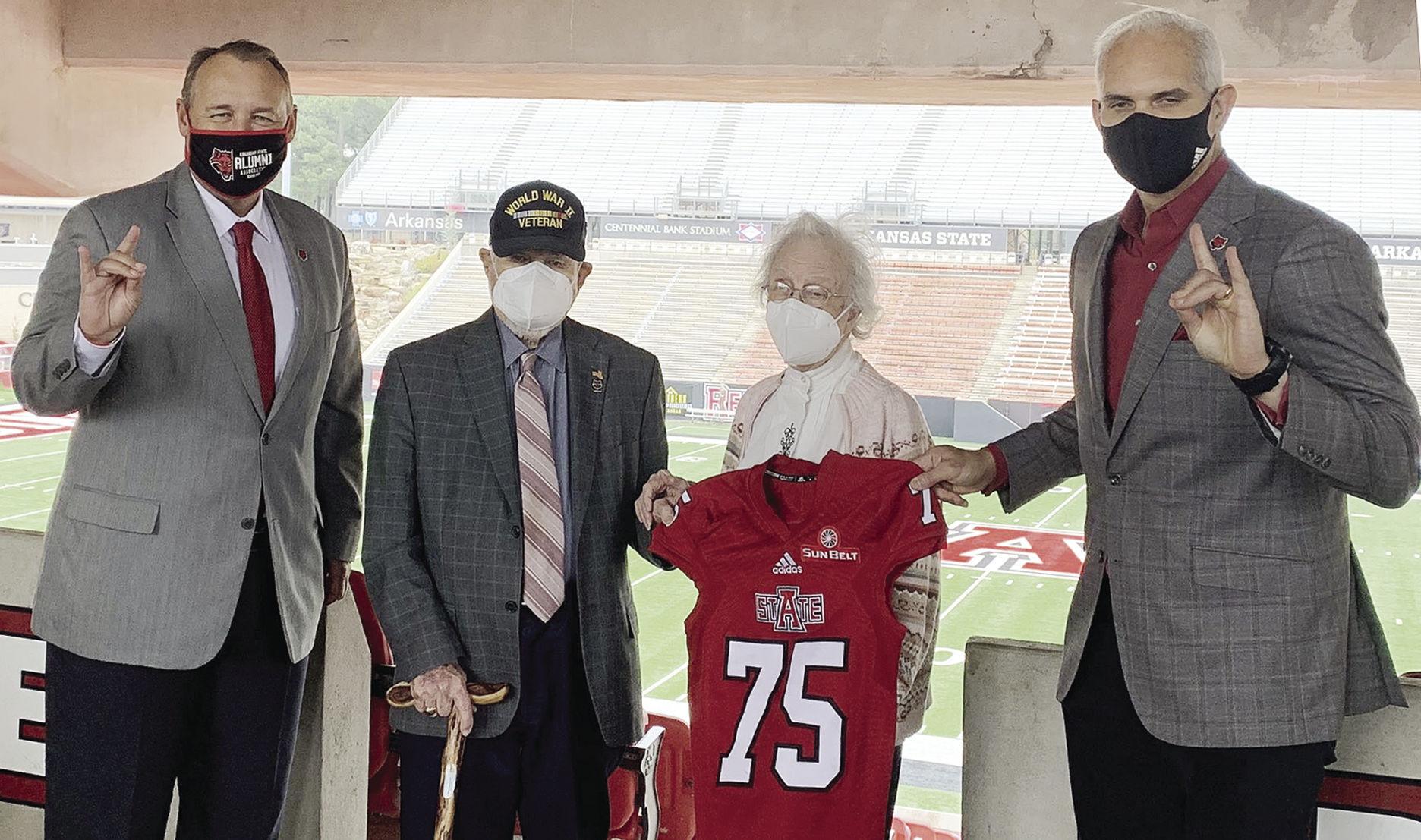 On Saturday during Arkansas State University’s Homecoming game, ASU Athletic Director Terry Mohajir, right, and Chancellor Kelly Damphousse, left, presented Verrel Foltz, 94, a World War II veteran, and his wife Roberta, with a jersey for attending his 75th straight Homecoming game. The couple watched the game from the chancellor’s box. Foltz said he’s been a proud ASU supporter since he graduated in 1950. Foltz used the GI Bill to attend what was then Arkansas State College.

JONESBORO — Lake City Mayor Jon Milligan and Shawn Only, his Democratic opponent for Arkansas House District 53, laid out their stances on statewide ballot initiatives and other issues last week during a Jonesboro Kiwanis Club meeting.

The position is currently held by state Rep. Dan Sullivan, R-Jonesboro, who secured a state Senate seat in the March primary because he is unopposed in the general election.

Roy Ockert, president-elect of the Kiwanis Club and moderator for the meeting, gave a brief summary of the three ballot issues before allowing candidates a chance to give viewpoints.

“Issue 1 would make permanent a half-cent sales tax for the Arkansas Road system,” Ockert said. “We have that sales tax now, but it’s temporary.”

Since 2013, Milligan said the road tax has been a blessing for Lake City’s road department.

While he knows the tax was supposed to sunset in 2023, Milligan said legislators voted to allow the people to decide if it should continue.

“I know it is very important for the small towns, for the transportation in our state and for the cities to continue to move forward with progress,” Milligan said.

Only said she is absolutely for Issue 1.

Ockert explained that Issue 2 makes a number of changes to make it more difficult for someone to stay in office for a long time. Both candidates are in favor of the constitutional amendment affecting term limits.

“Sen. Allen Clark proposed this bill and I would agree (with) knocking down the term limits for the representatives and senators,” Milligan said.

Only said, “I think that we have too many politicians who are just do-nothing politicians, who have been in office too long, and who have not represented the interests of all of their citizens.”

Issue 3, in essence, “makes it more difficult for citizens to get something on the ballot,” Ockert said. Milligan advocates for its approval.

While he understood it would make the process harder for some citizens, passing it would also be protecting the state from outside influences, Milligan said.

“From what I have heard and talked to senators, representatives and legislators, the biggest problem we are having is outsiders spending all this money trying to get things on the ballot and get our Constitution amended,” Milligan said.

Asking for signatures from 45 counties instead of 15, according to Milligan, is simply a matter of protecting citizens.

“Actually you are asking for more of the voters of Arkansas to hear their voice more having 45 counties instead of 15,” he said.

Only was adamantly against Issue 3.

“You already have to jump through a number of hoops just to get a petition going,” she said. “I am against increasing that and putting in roadblocks and barriers for citizens.”

After candidates discussed their viewpoints on ballot issues, the floor was open for questions from media and Kiwanis members.

Only said she would absolutely support a hate crimes law.

“We cannot continue to have complete disregard for the rights of all of our citizens. Hate crime laws are something that are in the best interests of all citizens,” she said.

Milligan said while he is aware Sen. Jim Hendren, R-Gravette, is working alongside a group of Arkansas legislators to bring a hate crimes bill into legislation, he has some concerns. He said he wouldn’t be in favor of passing a hate crime law but would consider the content if one was brought before him.

“My fear with a hate crimes law is that it’s an attack on some of the religions,” Milligan said.

“Representatives need to sit down, talk with the superintendents and the school boards, ask where they are lacking and trying to implement that change,” Milligan said.

Only said she advocates for reasonable spending in order to educate students, starting with pre-K.

JONESBORO — The number of confirmed coronavirus cases grew by 9.7 percent in Craighead County last week, and six other Northeast Arkansas counties experienced double-digit increases, according to data compiled from the Arkansas Department of Health.

Statewide, the number of confirmed cases grew by 6.18 percent between Oct. 5 and Sunday.

Locally, the growth seemed to accelerate during the latter part of last week, as Craighead County added 51 new cases on Thursday, 74 on Friday and 52 on Saturday, before dropping back to 24 Sunday.

Though the numbers were lower, Lawrence County experienced an 18.7 percent jump in new infections, including 34 new confirmed cases last Thursday, 19 Friday, 13 Saturday and seven on Sunday.

Mississippi County, which has been among the hardest-hit counties in the state, had the lowest growth rate in confirmed cases at 4.2 percent.

More troubling is growth in the number of active cases. On Oct. 5, Greene County had 99 active cases. By Sunday, that number was 149 – a 65.6 percent jump. Craighead County had 473 active cases on Sunday, which is 20 percent more than on Oct. 5.

Many of the active cases are among nursing home residents.

The new cases were based on the results of 9,894 tests.

Eight school districts in the region had five or more active cases on Monday, including 14 in the Jonesboro district. Eight districts across the state had more.

The Newport district had 12, Brookland and Marked Tree had nine each, Greene County Tech and Jackson County (Tuckerman) had seven, Manila had six and Trumann had five. The health department doesn’t disclose districts with fewer than five cases. Statewide, there were 549 active cases in the public schools.

The college campus with the most cases is Harding University in Searcy with 82. Harding Academy had an additional 13, leading all private K-12 schools in the state.

JONESBORO — Human remains were found Saturday in southwest Jonesboro during the search for a woman reported missing two years ago, police announced.

Prescott, 55, disappeared from her residence in the Griffin Park subdivision, leaving her purse, keys, cellphone and dog behind, previous Sun reporting indicates.

Saturday’s search in a wooded area near Valley View Church of Christ marked the first time EquuSearch could visit Jonesboro, Smith said. Volunteers, along with two detectives with the Jonesboro Police Department and Craighead County Coroner Toby Emerson, participated in the search that was held from 8 a.m. to 6 p.m.

“Detectives were called in to secure the scene and help with the search,” she said. “(The) remains have been sent to the State Crime Lab for positive identification.”

JPD is unaware of when the results from the Little Rock facility will be available for investigators, Smith said.

According to an EquuSearch advisory, Prescott was last seen wearing black and white Winnie the Pooh pajamas with purple Eeyore ears. Due to medication previously prescribed to the Hoxie native, she is considered an endangered person.

Northeast Arkansans who have information regarding Prescott’s disappearance or location may contact JPD Detective Robinson at 870-935-6710 or EquuSearch Midwest at 513-503-3706.