The health department reported 4,308 new cases statewide on Sunday and another 4,647 on Monday. As of Monday, active cases across the state rose to 61,121. The statewide death toll rose to 9,333, an increase of 19 since Saturday. The health department reported 1,068 people with the virus were hospitalized across the state, including 147 on ventilators. That’s an increase of 58 and 14, respectively, since Sunday.

Greene County had 177 new infections and one death in the two-day period and active cases stood at 1,119.

Mississippi County recorded three deaths in two days, along with 138 new cases. That county had 1,032 active cases as of Monday.

For most of last week, Craighead reported more cases each day than the more populous counties in northwest Arkansas. However, that trend changed by the latter part of last week. In recent days, Pulaski, Benton and Washington counties’ numbers have far exceeded Craighead’s totals.

For example on Saturday, the last day county-level numbers were available, Craighead County had 468 new cases, while Benton and Washington counties had more than 600 each. Pulaski County, where Little Rock is located, had 1,482 of the state’s total of 8,171 new cases on Saturday. Saline County, also in central Arkansas, had 473.

The surge in hospital admissions across the state has triggered plans to beef up staffing at some nonprofit hospitals across the state. The state’s American Rescue Plan Act Steering Committee on Monday approved a health department request for more than $50 million to increase hospital bed capacity at 11 hospitals, including $2,565,000 at St. Bernards Medical Center.

“In less than four weeks, hospitalizations related to COVID-19 have increased over 120 percent,” the health department’s request stated. “At no point during the pandemic thus far in Arkansas has such a rapid rise in COVID-related illness and hospitalizations been observed. The demand for nursing and other caregivers has skyrocketed, and there is a significant need for additional bed capacity across the state.”

The money would allow the hospital to hire additional staff and equipment to open up 13 more COVID medical beds and eight COVID intensive care beds for 30 days.

The steering committee’s recommendation must now be approved by the Legislative Council.

Rep. Jeff Wardlaw told fellow steering committee members they would soon receive a request for one-time pay raises for nursing instructors at the state’s colleges and universities as incentives. Because of the high demand for nurses in hospitals and nursing homes, Wardlaw said nursing instructors could earn more as temporary traveling nurses.

He said many of the state’s schools have long waiting lists for student admission to nursing schools.

Among the latest to contract the virus is Rep. Rick Crawford, R-Jonesboro, who tested positive late last week. Crawford, who is fully vaccinated, said he will remain in Jonesboro this week, but would vote by proxy.

“Along with others in my immediate family, I’ve had no major symptoms, feel well and expect no complications,” Crawford said in a statement. He praised former President Donald Trump’s Operation Warpspeed, which drove the creation of three COVID vaccines in under a year.

Also Monday, Gov. Asa Hutchinson announced Arkansas has received the first shipment of 211,000 at-home testing kits and the process of delivering those to the respective distribution locations will begin shortly. Hutchinson said the cost of these tests is around $10 million and will be covered by existing funds available in the COVID response budget.

The tests will be available at local public libraries, public health units and other locations. The National Guard will be assisting in the delivery of the at-home tests. The state has ordered a total of 1.5 million test kits. 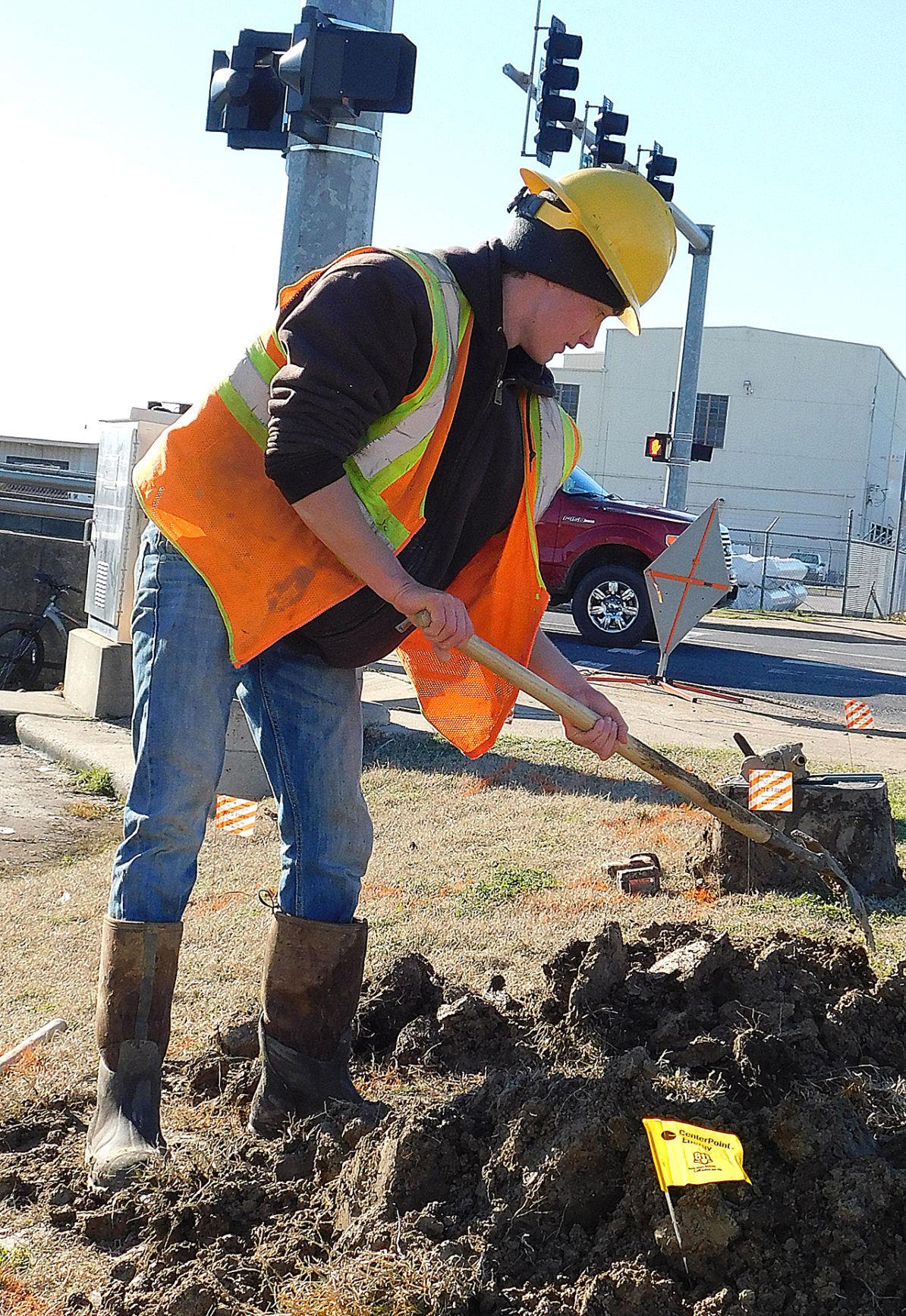 Braison Morris digs up a line to fix a water leak on Monday afternoon at the corner of Main Street and Johnson Avenue in Jonesboro. It was sunny, but chilly, with a high of 42 degrees.

JONESBORO — A Jonesboro man received a $150,000 bond Friday from District Judge Tommy Fowler after he found probable cause to charge Surking Wallace, 26, of Internet stalking of a child and fourth-degree sexual assault.

The Jonesboro Internet Crimes Against Children (ICAC) Division, with the assistance of the Street Crimes Unit (SCU), made an arrest in an Internet stalking and sexual assault case.

On Jan. 5, Wallace was placed into custody for his alleged involvement in this case involving a juvenile girl. Detective Bill Brown conducted an interview with the victim when she disclosed that she began communicating with Wallace through social media. The assault took place in late December.

Wallace was issued a no-contact order with the victim.

According to a probable cause affidavit, Brown said the victim, 15, told him she began communicating with Wallace on Facebook after he sent her a friend request. He told her he was a 25-year-old male.

The victim told Brown that on the night of Dec. 26 and the morning of Dec. 27, Wallace “came to her house and came into her bedroom through a window in her room.”

The victim told Brown they engaged in oral sex and then had sex together.

“The victim stated that after they finished her grandfather knocked at the door because it was locked and that is when he found Wallace and chased him out of the house,” the affidavit stated.

The city documented 624 accidents on Johnson Avenue (Arkansas 91) between North Main Street and Red Wolf Boulevard from January 2019 though October of this year. Three people were killed and 24 sustained severe injuries. There were 56 accidents on Highland Drive between Distributor Drive and Moore Road during that same period, with two fatalities.

He stressed that, for the new speed limits to reduce accidents, it will take cooperation from everyone.

“Most importantly, is cooperation from the public,” Smithee said. “Paying attention and obeying those laws will make a safer travel corridor for everybody. And then if that doesn’t work all by itself, of course, the enforcement component is a necessary creature. Without enforcement, folks will tend to ignore those signs at times.”

JONESBORO — A Jonesboro man was given a $500,000 bond Monday after a district judge found probable cause to charge him with several crimes after a shooting Saturday afternoon in Craighead County.

Smith is charged with first-degree battery/purposely causing physical injury to another person by means of a firearm, aggravated robbery and being a felon in possession of a firearm.

If convicted, Smith faces 10 to 40 years or life in prison for the first two charges and up to six years in prison and a $10,000 fine for the final charge.

The victim was transported to St. Bernards Medical Center where, according to Fowler, he is in the Intensive Care Unit and had his spleen and a kidney removed during surgery Saturday.

According to a probable cause affidavit by Detective David Bailey of the Craighead County Sheriff’s Office, the Criminal Investigation Division collected shell casings at the scene and spoke by phone to two suspects. Detectives discovered the exact location and went to an apartment complex in Jonesboro. Smith was taken into custody and the firearm used in the crime was taken by officials.

The victim spoke to detectives on Sunday and gave a statement, according to Chief Deputy Justin Rolland.

In January 2020, Smith was charged with the theft (worth more than $1,000) of a shotgun, three TVs and other electronic equipment from a home near Brookland. Smith and a co-defendant were freed on $1,000 bond each.

Smith was sentenced to six months of probation in that case.