JONESBORO — Scientists are seeing signals that COVID-19’s alarming omicron wave may have peaked in Britain and is about to do the same in the U.S., at which point cases may start dropping off dramatically, The Associated Press reported Wednesday.

But the newest report from the Arkansas Department of Health leaves little room for optimism, with 10,874 new known infections found across the state. The numbers were based on the results of about 21,000 tests.

Of those new cases, 665 were in Craighead County. Two more COVID-related deaths raised the county’s total since the pandemic reached the state to 267. The statewide death toll rose by 14 to 9,372.

The state believes 3,997 are suffering from the disease here. Active cases statewide totaled 71,132.

The health department said 1,185 COVID patients were hospitalized as of Wednesday, an increase of 37, and 167 of those patients were on ventilators.

In Northeast Arkansas, hospitals reported 199 of their patients had tested positive for the virus. Fourteen of them were on ventilators.

Scientists told the AP the omicron variant has proved so wildly contagious that it may already be running out of people to infect, just a month and a half after it was first detected in South Africa.

“It’s going to come down as fast as it went up,” said Ali Mokdad, a professor of health metrics sciences at the University of Washington in Seattle.

Dr. Jose Romero, the secretary of health in Arkansas, said Tuesday he doesn’t expect the number of cases to come down here until early February.

JONESBORO — The ceremony was billed as a “groundbreaking,” but it’s hard to dig up asphalt with ceremonial shovels.

Still, dozens of members of the community turned out Wednesday to hear Mayor Harold Copenhaver outline plans for Jonesboro’s newest park, to be constructed at Union Street on West Monroe Avenue.

The park, adjacent to the United Way and Winter Wonderland buildings, will include a pavilion and playground, and will replace Monroe Avenue asphalt from Union to Madison Street.

“This is going to be the first step of many of what the community will see,” Copenhaver said, noting that the city has made revitalizing the downtown area a priority. “This means cleaning it up in some ways, adding amenities. And it attracts both businesses and citizens. And it creates a new all-inclusive for all economic backgrounds.”

Copenhaver defined downtown as not just Main Street, but several blocks beyond in each direction, including Arkansas State University.

“What we have seen is an investment by a lot of people downtown,” the mayor continued. “From townhomes, condominiums, a lot of habitants are living downtown. So we want to provide ample green space for those citizens and individuals to be able to walk to our downtown community … and we want to make it accessible for all.”

Danny Kapales, the city’s parks and recreation director, said the new park, for the most part, will be constructed by city employees. He said the city will be looking for more opportunities to develop small neighborhood parks in the city’s oldest sections of town.

Craig Light, the city’s chief engineer, said he hopes to make more modifications to Monroe, at least to Flint Street this year, by adding a bike path to the new park. 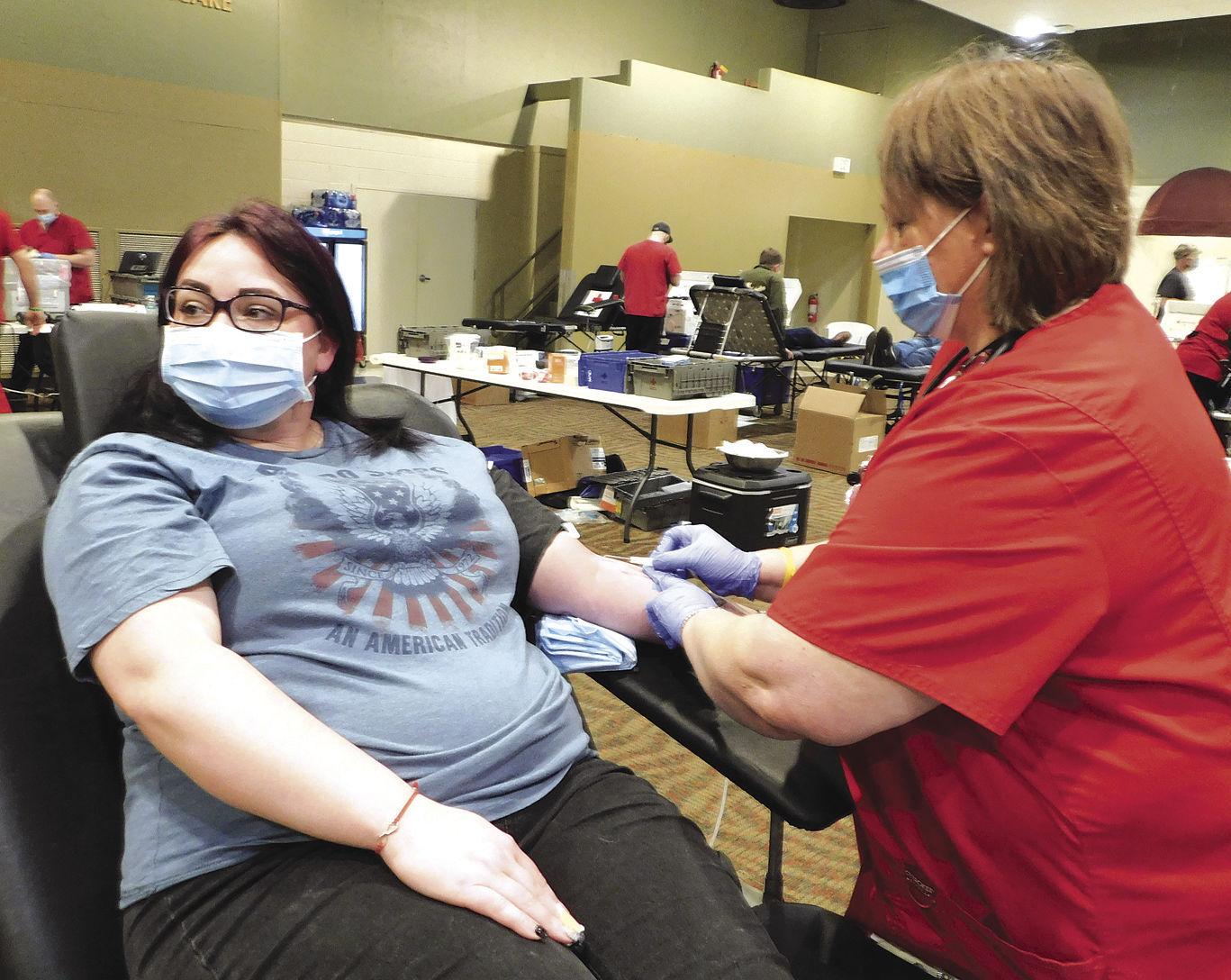 Shaina Doherty looks away as Christine Scherer, a phlebotomist, inserts the needle for her donation at the “Be the Hero” blood drive on Wednesday inside the St. Bernards Auditorium on East Washington Avenue in Jonesboro. Doherty said she had to receive blood as a child, so for years now, she and her parents do their best to donate blood as often as they can. The blood drive continues at the auditorium today and Friday from 11 a.m to 6 p.m.

A hero at the blood drive

Marco Clark, 37, of Lake City, pled guilty to capital murder on June 2, 2021. He died after becoming ill at the county detention center just a day before he was scheduled to be transported to state prison, Rolland said at the time.

According to a medical examiner, Clark had minute traces of drugs in his system, but the examiner said they did not contribute to his death, Rolland said.

Rolland stated that jail employees said Clark was exceedingly stressed about the transfer to DOC.

Clark complained to a corrections officer about 1 a.m. of stomach pains. The officer noticed that Clark was sweating profusely.

The corrections officer went to get oxygen and a blood pressure monitor, and when he returned to the cell Clark had collapsed, Rolland said.

Clark was conscious and was transported to St. Bernards Medical Center, where he spoke to medical personnel.

Clark pled guilty to the Aug. 24, 2019, murder of his estranged wife, Melinda Colburn, near Lake City.

Clark posted an obscenity-laced Facebook rant on the night of the murder that not only mentioned being wanted for a murder, but also provided a window into his thoughts and feelings about his circumstances and what he was willing to do.

“Who gonna be my next (expletive) victim in Jonesboro?” Clark said as he was driving Colburn’s white Dodge Challenger.

He later talked about his apparent violent disregard for human life.

“I’m gonna shoot y’all holes in y’all (expletive) face!” he said. “Whether it’s a police (officer) or whatever, I don’t give a (expletive.)”

Investigator Ron Richardson made phone contact with Clark and convinced him to turn himself in.

Later that night Clark confessed to the killing, Rolland said.

JONESBORO — The 20th anniversary of the Northeast Arkansas Dr. Martin Luther King Jr. Day celebration will be broadcast live from the Fowler Center at noon on Monday, Jan. 17. The theme for this year’s event is, “It Starts With Me.”

The festivities will be all virtual again this year, according to Dr. Lonnie Williams, vice chancellor for diversity, inclusion and community engagement at Arkansas State University.

The program will be a video retrospective broadcast live on the Craighead MLK Jr. Parade Facebook page. It will also air on KLEK.

This is the second consecutive year that the event has been virtual due to COVID-19 concerns.

“It will closed to the public, and there will be no parade out of safety concerns.” Williams said. “We did not want to miss an opportunity to celebrate the 20th anniversary of this program being celebrated in Northeast Arkansas.”

Williams said with all of the divisiveness in America and the seemingly increasing racial divide amidst other things, he thinks the theme is fitting for this year’s event.

“‘It Starts With Me,’ speaks to the fact that it is up to all of us, individually and collectively, to do our part in working toward better racial relations and respect for all to make this a better America to fulfill The Dream.” said Williams.

Next there will be performances by the MLK Dancers and the MLK Choir, however the number of participants will be limited for those groups, as well.

There are more events scheduled Monday including:

Volunteer A-State plans to honor the MLK legacy by serving the A-State community through a service project at the A-State Food Pantry.

The Craighead County NAACP, Mu Sigma Sigma chapter of Sigma Gamma Rho sorority and the Jonesboro Alumnae chapter of Delta Sigma Theta sorority will host “Stop the Violence: A Conversation” from 7-8:30 p.m. via Zoom. Zoom meeting ID is 842 6981 6233 and 626721 will be the pass code.

A retrospective will be aired by KAIT-TV in Jonesboro, as well, time still to be announced.

Williams said Martin Luther King, Jr. Day, which is observed on the third Monday of January each year, offers people the opportunity to reflect on the work that still needs to be done for racial equality.

“Before we can change, we have to be the starters,” he added. “Because for us to make change, it starts on a smaller scale... It starts with me.”

For more information, contact Kenisha Ross, chairperson of the planning committee, at MLKjrday_pr2001@ yahoo.com or call 870-623-1951.