JONESBORO — Local schools are having to watch their numbers closely and make the tough decision of whether or not to re-mask as COVID-19 numbers continue to spike.

“Like everyone else we are dealing and doing the best we can,” Cheatham said.

Nettleton School District Supt. Karen Curtner said Friday morning that though they have not reinstated a mask mandate, they have put out a survey and the school board will be voting on the issue at the next meeting.

“We will make it, its just tough for everybody right now, ” Curtner said, “but we only have a limited number of AMI days and we may need them for snow.” She noted that the school is having to combine classes right now.

“We have to get the stress levels down,” Curtner said, “but we are not going to let this dominate us.”

Valley View School District Curriculum Specialist Roland Popejoy said Friday morning that the school is encouraging students and staff to wear masks, but that they have not decided to reinstate the mask mandate at this time.

The school board will discuss it at the next meeting in a week and a half he said, noting they have a number of students out for quarantine. He said that on Thursday the school had 229 students and 30 staff who were active or in quarantine.

“I will be checking numbers next week,” Kennedy said. “We are getting close but have not went back to masks yet.”

He said the school has 328 students, grades K-12, in quarantine which is 10.7 percent at the moment. He noted that there are quite a few of those students scheduled to come back on Tuesday or Wednesday and they are off Monday for Martin Luther King Jr. day.

Kennedy said that the school board doesn’t meet again until February, noting that he has the power to make the decision if needed, and he will be watching it carefully.

He said that masks still are not required and that their numbers actually went down on Thursday with only one added to their positive cases, making 39 active cases in both students and staff.

The Arkansas Department of Health website, reported the number of active cases on Thursday Jan. 13 and cumulative cases since August 2021 in the local schools as:

Some other local school numbers included: 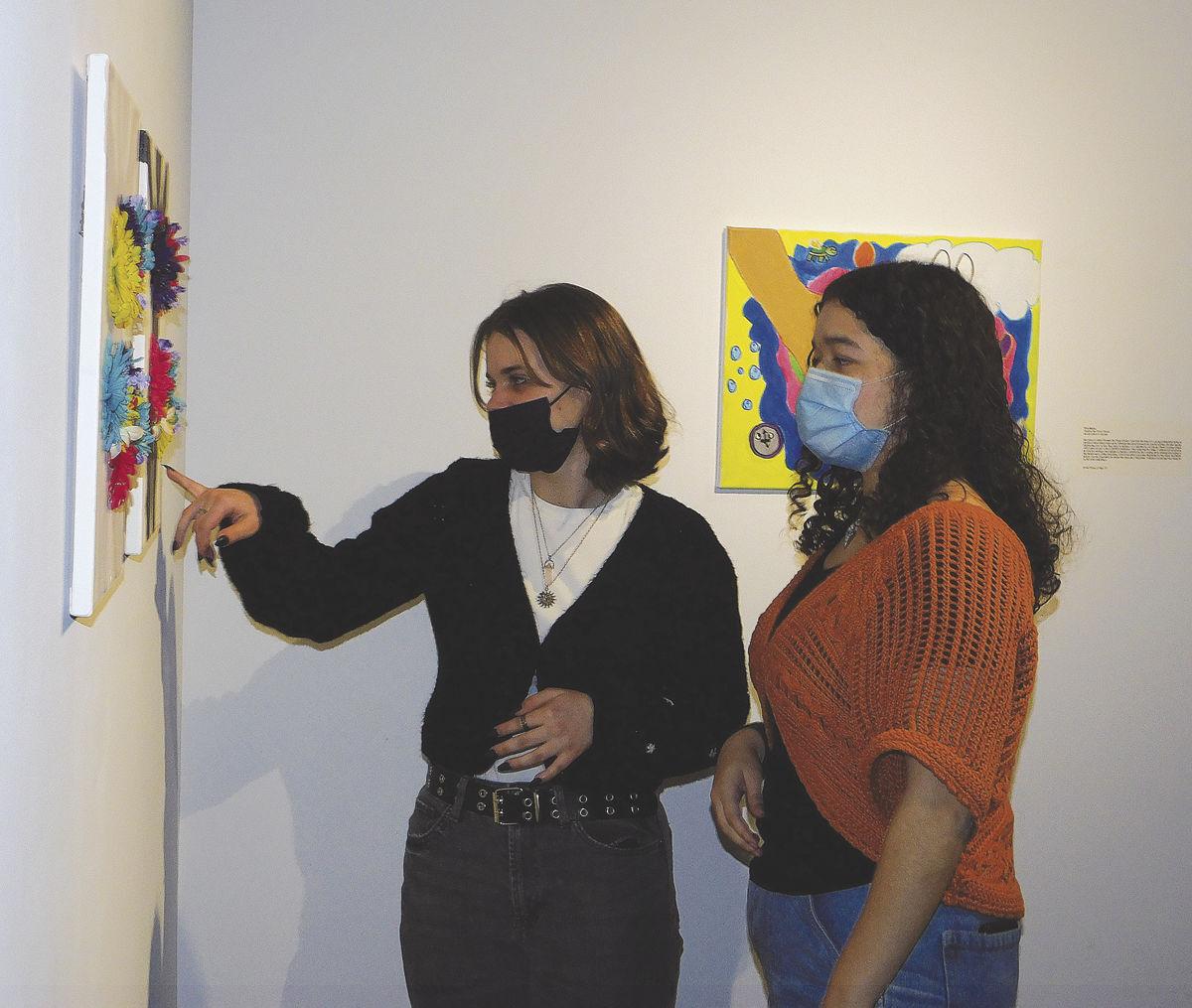 Kaley Wake and Kaylee Correa, 11th-graders from Harrisburg High School, enjoy a colorful piece of art on display on Thursday night at the seventh annual Inspired Exhibition at the Bradbury Art Museum on the campus of Arkansas State University in Jonesboro. Correa noted that she had won one of the Juror’s Merit Awards for her work, “Transgression,” and that she had been inspired by a piece from Peter Kuper, who served as juror for the student exhibition.

See a complete list of winners on page 5A.

JONESBORO — A Walnut Ridge man saw his temporary bond of $250,000 raised to $500,000 Friday after District Judge David Boling found probable cause to charge him with multiple felonies.

Qualls was arrested at about 11:30 p.m. Monday in the parking lot of Lexington Suites, 2909 Kazi St., by agents with the 2nd Judicial Drug Task Force in conjunction with agents with the U.S. Marshals Service Arkansas Fugitive Task Force after they received information that Qualls was in the Jonesboro area, according to a probable cause affidavit.

Qualls was reported to be in a white passenger car with Mississippi tags in the company of an unknown female. Qualls had confirmed felony warrants from multiple jurisdictions with several of the charges involving firearms and the most serious offenses being Class Y felonies, the affidavit said.

It was reported to agents searching for Qualls, that he would attempt any means necessary to escape capture, and Qualls was reportedly always armed with a firearm.

According to the affidavit, “During surveillance on the Lexington Suites, a white Nissan passenger car with Mississippi tags was seen pulling into the back parking lot of the hotel. Agents were able to view Qualls in the passenger seat and a female driver. The vehicle stopped in the back of the lot and began reversing into a parking spot. Agents then took this opportunity to surround Qualls and the female who were still seated inside the vehicle. Upon seeing our presence, Qualls was seen yelling for the female driver to ‘GO GO GO.’

“At the time Qualls was telling the female, several agents were positioning themselves around the vehicle. At one point, the vehicle lunged forward as if (the driver) had let off the brake. She again put her foot on the brake, but both Qualls and the driver refused to exit the vehicle and follow the agents’ commands.”

An agent broke the back driver side window, allowing agents to reach inside the vehicle and unlock all the doors, the affidavit said. As soon as the doors were unlocked, agents had to physically remove Qualls from the vehicle where he was taken into custody.

At the hearing Friday, Deputy Prosecutor Katherine Calaway told Boling that Qualls was out on three separate bonds totaling almost $200,000. She said a search of Qualls’ residence had turned up 13 firearms and controlled substances.

Calaway said she was filing papers in court to revoke Qualls’ bonds.

According to court documents, Qualls has been convicted of four felonies in Craighead and Pulaski counties and is facing felony charges in Greene County, as well.

One is a proposed planned residential development on 29.82 acres west of North Church Street (Arkansas 141).

Developer Don Overton of Terra Verde LLC, who would buy the land if rezoning is approved, seeks to build 115 attached houses on the property, for a total of 230 housing units.

Opposition has come from residents along Bettie Drive, a short, narrow street, that would provide access to the subdivision from Church Street. But there is also access to the property from French Street, which connects with Alpine Avenue. Overton said at the council’s Jan. 4 meeting he’s working on plans for a third access point.

The other rezoning, requested by Herbert and Sharon Stallings, would change 0.43 acres at 3200 and 3217 Neil Circle from I-2 general industrial to I-1 limited industrial.

Council members will hear the second of three required readings of an ordinance proposed by Corey Hudson to rezone 0.4 acres at 5005 E. Nettleton Ave. from R-3 multifamily to C-3 general commercial.

Also scheduled for a second reading is an ordinance that would establish 25 mph speed limits at West College Avenue from Wood Street to Frierson Avenue was also heard for the first time. The proposal would also install “no parking signs” at West Gordon Street between Main Street and 2nd Street.

In new business, the council will consider a resolution that would authorize a $2.1 million lease-purchase agreement for seven garbage trucks. The lease agreement is U.S. Bancorp. The purchase includes five automated trucks used for residential pickup routes.

Another proposed ordinance would “declare an exceptional situation” and waive competitive bidding for fire truck body work on a new pumper truck that was damaged at the scene of a fire last June. G&W Diesel Services of Memphis was selected by the city’s insurance provider to perform the work.

Another resolution details plans to use federal funding sources for construction of a trail between Airport Road and the Arkansas State University campus.

Twenty proposed resolutions would authorize municipal liens on property to recover code enforcement expenses incurred by the city. Most of those expenses were for mowing tall grass.

The council’s public safety committee is scheduled to meet at 5 p.m.

Those numbers were based on the results of more than 21,000 tests.

Both counts were down from Thursday’s record-setting numbers of 12,990 statewide and Craighead County’s 545, and all figures are probably lower than the actual number of new cases.

The health department has established a phone number for Arkansans to report their positive at-home COVID-19 test results: 1-800-803-7847.

Twenty-three deaths were included in Friday’s report, but none in Northeast Arkansas.

The health department said 169 Greene County residents were among the newly infected Friday, increasing the number of active cases by 111 to 1,555. Mississippi County had 161 new cases, raising active cases by 103 to 1,305.