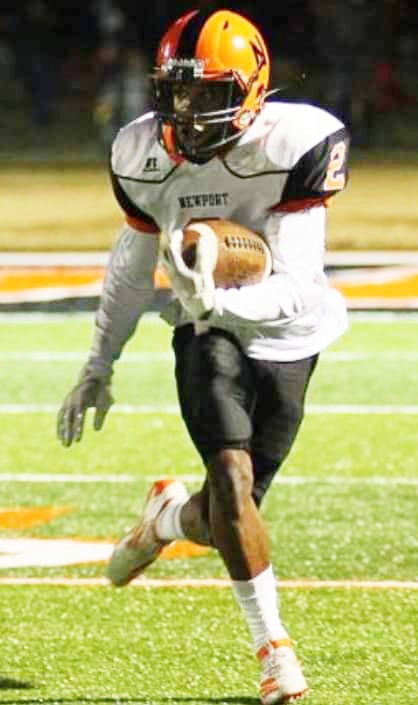 Tharon Davis signed his letter of intent with University of Memphis on December 16, at 2 p.m. in the Newport High School Auditorium.

Davis ended the 2020 season with at total of 951 offensive yards: 699 yards rushing and 252 yards receiving. Davis had 114 carries with an average 6.1 yards per carry for 14 touchdowns and 22 receptions. Defensively, Davis totaled 15 solo tackles.

Davis graduates from Newport High School in 2021 after attending school within the district since Kindergarten. Earlier in the season Davis committed to North Alabama thinking it would be a fit for him. As the season progressed, he realized that his heart was set on attending University of Memphis.

“Memphis is closer to family than North Alabama,” states Davis. “From the beginning of the recruiting process, the Memphis coaches expressed the most interest. Memphis is also known for their running backs in the league, which makes it an overall better fit.”

Reflecting on the Hounds 2020 season, Davis expresses that it did not go as planned.

“The plan was to go to Little Rock and win the Championship. That was the plan,” he said. “But I loved every part of the season. I would not trade it for anything.”

What are his feelings about how COVID-19 affected the game and the fan base?

“COVID-19 affected everything,” he said. “Every senior wanted the last season stands to be packed.” He said that the season did not go that bad, and could have been cancelled entirely. The Hounds were to play the schedule, and many people attended inside and outside the stands, as well as watched the games live on Facebook. Although limited numbers were able to attend, the Hounds played hard.

When asked about a future career and college, Davis replied that he wanted to study biology and possibly go into physical therapy, or coaching. As of now, he is undecided. As part of a tight family, he is blessed that the family pushed him to excel.

“They know I can be great,” he said. “They want to see not just me succeed, but all my teammates.”

Asked who in the community inspires you? “Hands down, Coach Reynolds,” Davis said. “He has always been a role model. He teaches us life lessons and what it takes to be a successful young man.”