JONESBORO — Jackson County became the latest Northeast Arkansas county to have at least one person test positive for the coronavirus, state officials announced this week.

The statewide death toll from the pandemic climbed to 32, Gov. Asa Hutchinson said Tuesday. However, Crittenden County recorded 12 new cases, bringing the total for the West Memphis area to 115.

The statewide total of coronavirus cases rose by 152 to 1,562 by Wednesday morning. Of those, 487 have recovered since their diagnoses.

Tuesday’s numbers followed a spike of 130 new cases Monday. Most of those cases were in state and federal prisons. The number of patients who are hospitalized was 88.

“You can see that what I am hoping is a plateau in the number of hospitalizations,” Hutchinson said. “And that is a marker, a statistic that is constant. It is measurable.”

The governor said he also signed an executive order Tuesday making first responders and first line health care workers eligible for workers compensation coverage should they be infected with the virus.

Another executive order protects emergency responders from medical liability during the COVID-19 emergency.

“This includes the physicians, the physicians assistants, specialists’ assistants, nurse practitioners, licensed registered nurses and licensed practical nurses,” the governor said. “We don’t want them to worry about them performing their responsibilities in emergency circumstances about being sued, about liability. They’re out there trying to act in this emergency in emergency fashion.” 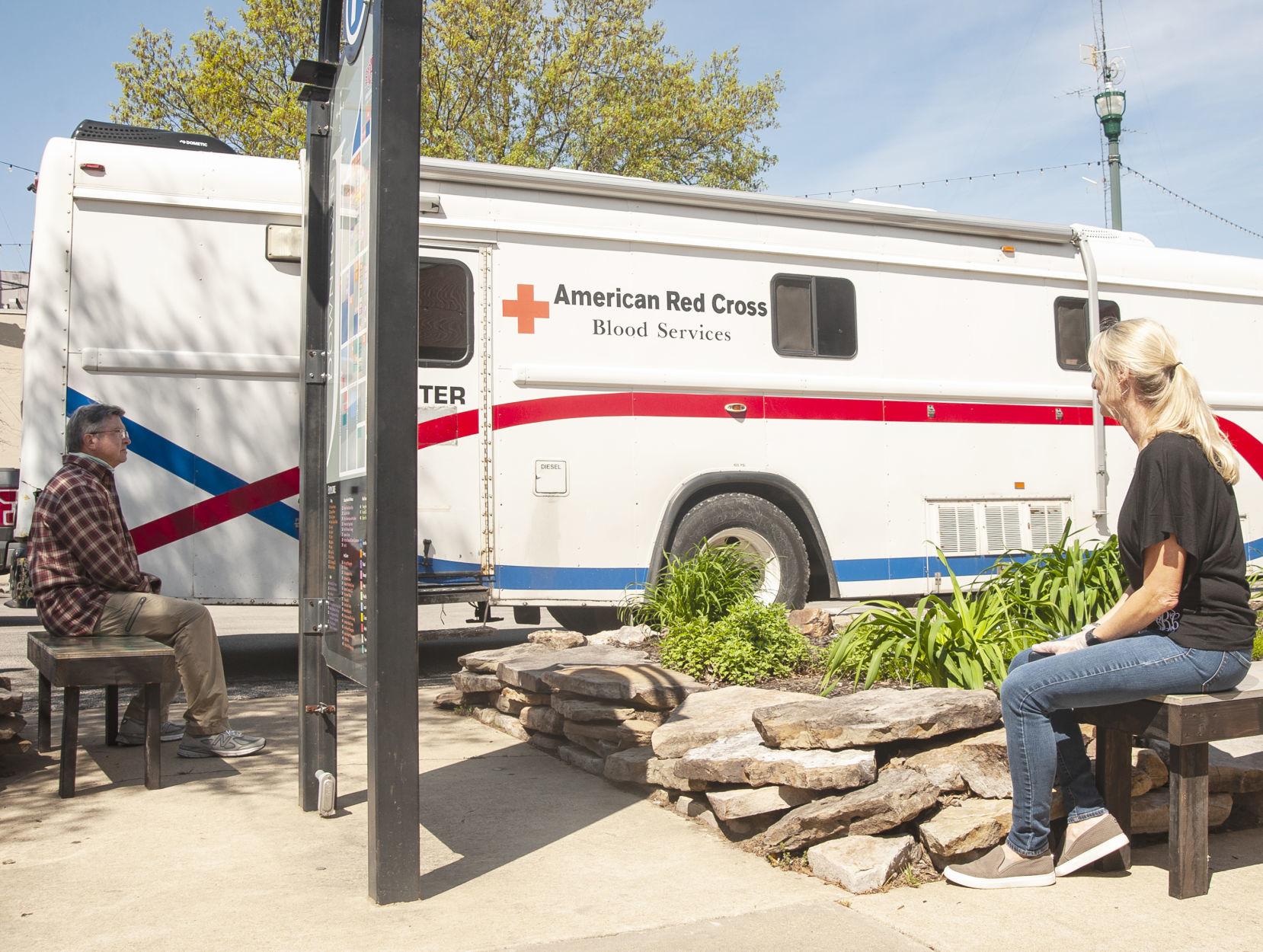 Photos by Quentin Winstine / The Sun /

ABOVE: Bill Graham (left) and Lynn Brandon practice social distancing April 9 while waiting for their scheduled blood donation time during a blood drive hosted by the American Red Cross in downtown Jonesboro. The U.S. Surgeon General is encouraging blood and platelet donations as blood supplies have dropped since the beginning of the coronavirus pandemic. The Red Cross follows the highest standards of safety and infection control, and volunteer donors are the only source of blood for those in need.

LEFT: Lindsay Lewis (left) sits back while making a blood donation on April 9 during a blood drive hosted by the American Red Cross in downtown Jonesboro.

Mangrum recently returned home to Black Oak, the birthplace of his band, and decided to live in the house he grew up in.

“I moved into my grandmother’s house,” he said. “I returned to my roots.”

Mangrum said although when he first moved back it was more like “Black Hole” Arkansas, than Black Oak, he has begun to adjust.

“My cell phone would not even work out here,” he said. Mangrum ended up installing a landline so he can conduct business remotely.

The band’s guitar player and longtime friend of Mangrum, Ricky Lee, said Rye contacted him via email asking to present the awards to the band, when Rye discovered Mangrum was returning to Black Oak.

Due to the COVID-19 pandemic, arrangements were made for Rye to present the awards to Mangrum at his place of residence.

The band was originally named The Knowbody Else, but was renamed in 1971, putting their hometown on the map.

Mangrum said he was just a young boy when he decided to start a band.

“I snuck into my grandmother’s living room one night and got to watch Elvis,” he said.

Mangrum said he was struck by Elvis looking like he was having so much fun. It was Elvis who would later provide Mangrum with some advice that produced the band chart-topping hit, “Jim Dandy”.

Mangrum said he started out singing, but when he met Lee at a high school talent show, he was playing drums.

Lee said the pair were in separate bands at the time. “He was the drummer in a band,”Lee said. “My band won the talent show.”

Mangrum said there was only one reason his band had a set of drums in the first place.

“Nobody else would forge their daddy’s name to purchase a set of drums except me,” he said. “I got a whooping for that.”

Lee said after the talent show, Mangrum approached him about starting a band. “Jim said we were the only two out of the bands that were any good anyway,” he said.

The pair began rehearsing in places around town. “We practiced at the cotton gin, which is now the co-op,” Mangrum said. “We were terrible at first.”

Reminiscing on the early days of the band, Mangrum said he remembered the very first gig.

“We played at the roller rink in McCrory, Arkansas,” he said. “I hauled a 15-foot-step ladder on stage to jump off of it and hit the floor.” He said people paid to see his antics long before he played well.

A well-known phrase “the third time is the charm” was true for the band, after two trips to California produced no results. Lee said the band was doing festivals to try to get their name out.

“We came back with our tail between our legs,” Mangrum said.

However, the pair gained some valuable insight. Mangrum said he and Lee were the only two in their area with long hair.

“My dad would say, ‘I don’t care how long it is, get back to work at the gin,’” he said. Others were not so accommodating, and Mangrum said he got into a lot of fights because he was not accepted by peers.

“Where we were from, there was no one like us. When we got to California, there were people like us everywhere,” Mangrum said.

The third trip to California was the charm. The band was discovered by Ahmet Eretgun, the president and founder of Atlantic Records, in 1970 and the rest is history.

Lee said Eretgun got into his car and drove to the band’s sold out show at the Corral Club in Topanga Canyon, Calif.

Looking back, Lee said it was a pretty big deal for Eretgun to sign them himself.

“He only signed five bands, and we were the fifth,” he said. “ He loved us so much, he signed us on the spot.”

Lee said as they became close to Eretgun, the band would often gift him with something unique to Arkansas.

“He loved Arkansas Moonshine,” Lee said, “so we would sneak him some.”

The band toured all over the country after being signed to Atlantic Records.

Mangrum said when they played at a California festival with about 350,000 people in attendance, he knew they had made it.

“Making it to me was just making a living, doing something I loved,” he said.

It was a call from Elvis Presley himself that led to the bands hit song, a remake of “Jim Dandy” by songwriter Lincoln Chase. The song was released in 1973 as the first single on the band’s album “High on the Hog.” It reached No. 25 on the pop charts.

“My daddy started calling me Jim Dandy when I was 9 years old,” Mangrum said.

Lee said the band got a phone call telling them Elvis Presley was going to call them to make a request.

“When Elvis Presley calls you up and asks you to do a song, you do the song,” Lee said. Presley told them since Mangrum’s stage name was “Jim Dandy” they should sing the song.

For his band, Mangrum said truth has always been stranger than fiction.

“Nobody makes it from here,” he said. “It was divine intervention, and I would say we had a charmed life.”

The next Newport City Council Meeting will be held at 6 p.m. May 4.

The Jackson County Retired Teachers Association will not meet in April.

Arkansas Department of Workforce Services: The Newport-DWS office will be servicing the public by email and telephone. Should a person need to file for unemployment benefits they can apply online at: ezarc.adws.arkansas.gov and then contact the office at 870-523-3641, so that claims can be processed. Due to the safety of the public and the staff, we will continue service through email and telephone. If information is needed, please contact at 870-523-3641.

Unity Health Harris Medical Center: Unity Health Harris Medical Center will be limiting access to our facilities and anyone who enters must be screened for coronavirus symptoms through questionnaire and temperature check. In order to protect our patients and staff, we ask that you limit visitors to one per patient in the New Life Center, Emergency Department, Outpatient Surgery and during clinic visits only. No other visitors will be allowed. When possible, please have your visitor remain in the vehicle rather than entering the building. The following entrances will be open for screening to allow access to the building: Unity Health Harris Medical Center – ER entrance; OB/GYN Clinic – front door; 1117 McLain Clinics – front entrance by iCareRX pharmacy; 1200 McLain Clinics – front sliding door entrance.

Due to COVID-19, the Jackson County Library will be closed until further notice. If you need help accessing our online services, please call us at 870-523-2952 between 9 a.m. and 5 p.m. Monday-Friday, or message us on Facebook.

Newport
JPs to meet outside courthouse

NEWPORT — When the Jackson County Quorum Court gathers tonight, justices of the peace will hold their meeting outside the courthouse to allow for the state-mandated social distancing needed to remain safe from the coronavirus.

“It looks like the weather is going to be warm and sunny,” County Judge Jeff Phillips said Wednesday.

“If the weather is good, we’ll hold the meeting outside. If it’s not, then we’ll have to meet inside.”

Phillips said the quorum court is required by law to meet, and he said the county was not able to hold the meeting online.

“No, we have to meet, by law. We aren’t even allowed to have proxies,” he said.

By meeting outside, the justices of the peace can be sure to stay maintain the recommended 6-foot distance between each other.

Jackson County reported its first case of COVID-19 this week, and the county judge said residents are taking the coronavirus pandemic seriously.

“The folks here are taking precautions; you see them in the stores wearing masks,” he said. “Thankfully, most people survive this.”

Phillips said the county has yet to receive any special funding under the Coronavirus Aid, Relief, and Economic Security Act (CARES Act). However, the JPs will consider a resolution authorizing the county to apply for emergency grant funds through the COVID-19 Emergency Response Arkansas Community and Economic Development Program.

In order to qualify for the funding, the county has to meet certain conditions, hold a public hearing and have an active Citizen Participation Plan/Community Development Plan as part of the application process, according to the resolution.

Also on the agenda is a resolution authorizing the county judge and county clerk to enter into an administrative agreement with the White River Planning and Development District, allowing the district to provide administrative services to the county.

The county anticipates funding from the Arkansas Economic Development Commission for a community development application and will require assistance from the district to identify and implement the regulations pertaining to the grant.

The costs and contract formats will have to be pre-approved by the AEDC and all such costs are to be paid by the AEDC from the grant, according to the resolution.

The meeting begins at 6 p.m. tonight outside the Jackson County Courthouse, in the parking lot.