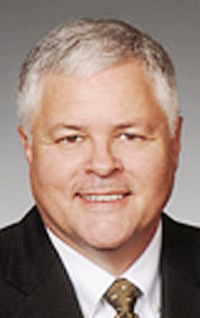 JONESBORO — A judge in Little Rock has thrown out a lawsuit filed by two state representatives from Jonesboro and two local residents who claim Gov. Asa Hutchinson’s health secretary exceeded his authority in dealing with the coronavirus pandemic.

Pulaski County Circuit Judge Wendell Griffen ruled Wednesday that Health Secretary Jose Romero, acting under an emergency declaration by the governor, acted within the powers delegated to him by the Arkansas General Assembly.

Representatives Dan Sullivan and Brandt Smith were among 18 lawmakers who brought the lawsuit, on Sept. 3. Iris Stevens and James David Haigler, both of Jonesboro, were among seven private citizens who also signed onto the court challenge.

Their attorneys, Travis Story and Gregory Payne of Fayetteville, contended that the authority and rules that the Legislative Council approved in November 2019, “were based on the best reasonably available scientific evidence at the time they were adopted” by the state Board of Health in April 2018. They argued COVID-19, the disease caused by the novel coronavirus Hutchinson cited March in declaring the emergency, didn’t exist at the time legislators approved the rules.

But in a hearing Wednesday, Griffen saw it differently.

“The Arkansas State Board of Health Department of Health promulgated Rules pertaining to Reportable Diseases in April 2018 which were reviewed by the Legislative Council, approved by that body in December 2018, and which took effect in January 2019,” Griffen said in docket notes posted online. “The 2019 Rules explicitly included ‘novel coronavirus’ among the reportable diseases.The parties agree that COVID-19 is a novel coronavirus. Novel coronavirus is specifically included in the 2019 Rule promulgated by the Board of Health and approved by the Legislature.”

Reacting to the decision, Hutchinson said he appreciated Griffen’s quick decision in the case, as Sullivan’s team requested.

“Particularly whenever we’re seeing high hospitalizations and a continued number of high cases, we want the public to have confidence in the emergency rules that we put into place,” Hutchinson said. “The judge found very clearly, without hesitation, that every action we’ve taken is pursuant to the authority that the general assembly has given to us and that is necessary in this emergency.”

Craighead County had the highest number of new coronavirus cases in the state Wednesday, while the adjacent counties of Greene, Poinsett, Lawrence and Mississippi also ranked in the top 11.