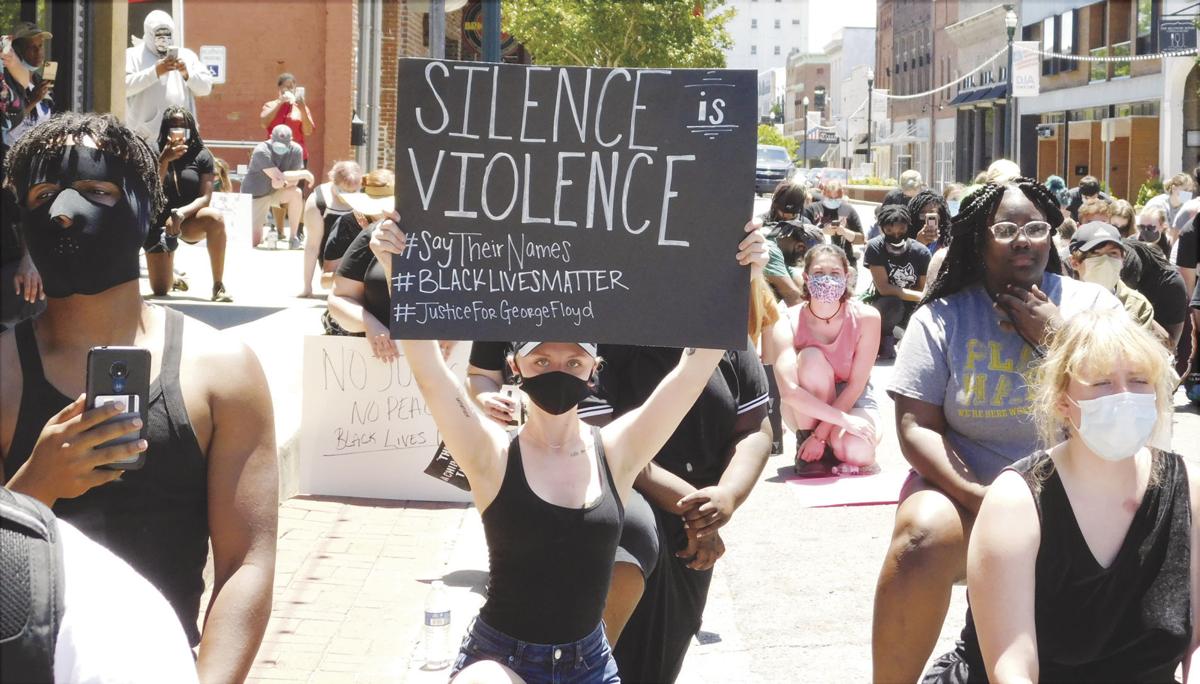 Protesters kneel for eight minutes and 46 seconds, the same amount time it took officers to kill George Floyd, on at approximately 1 p.m. on Main Street in Jonesboro. 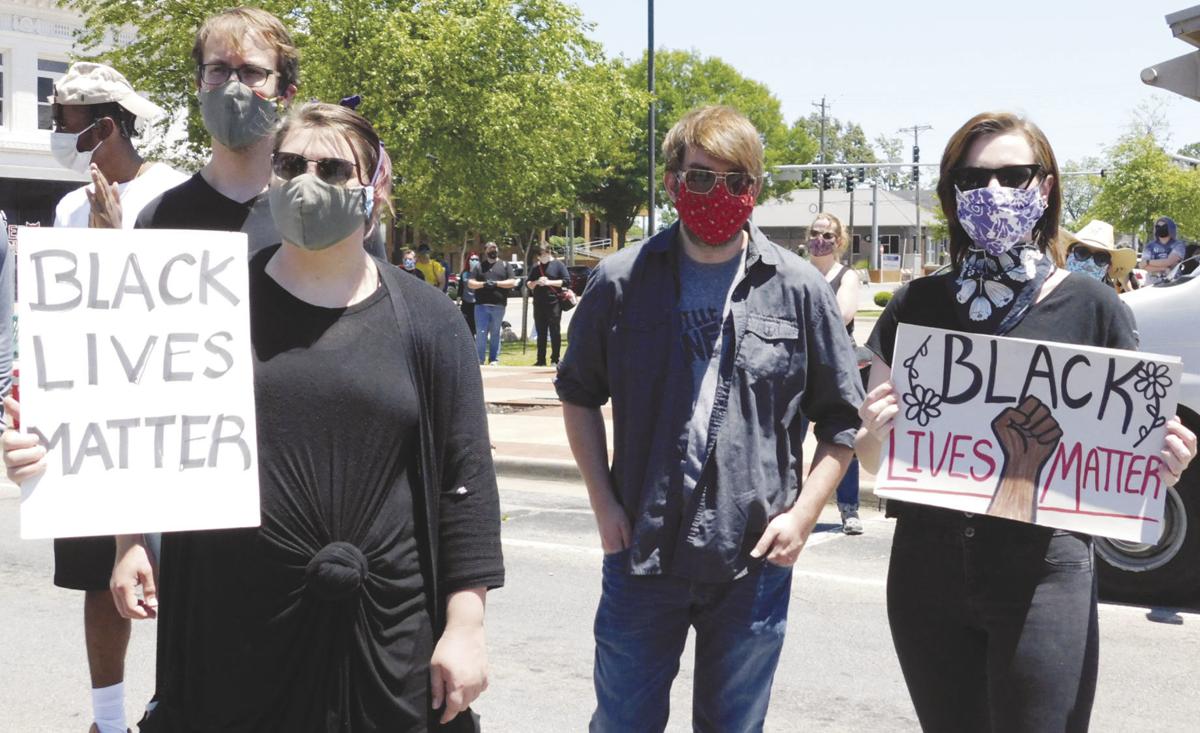 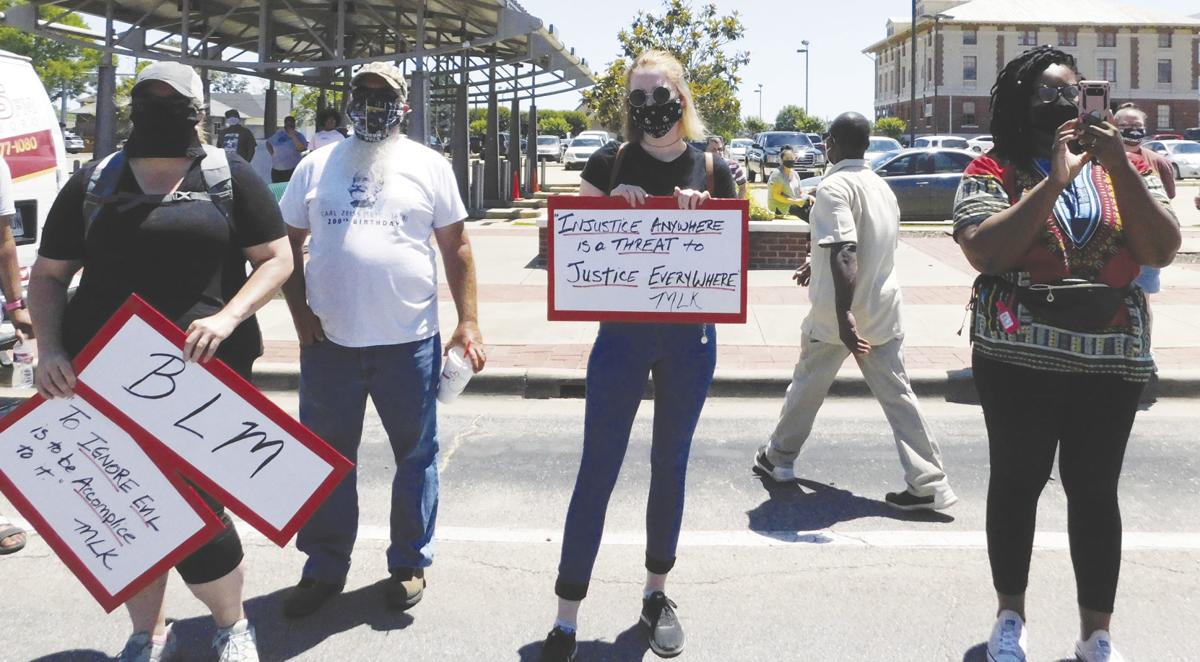 Protesters hold signs Monday while donning bandanas and masks to protect each other from COVID-19.

Protesters kneel for eight minutes and 46 seconds, the same amount time it took officers to kill George Floyd, on at approximately 1 p.m. on Main Street in Jonesboro.

Protesters hold signs Monday while donning bandanas and masks to protect each other from COVID-19.

JONESBORO — People of all religions, colors, genders and sexualities gathered for a peaceful protest on Monday that started at the Craighead County Courthouse.

Monday marked the second day that Jonesboro residents took part in the wave of protests that have swept the nation since the video of a police officer holding George Floyd on the ground – pinned by a knee on his neck for 8 minutes and 46 seconds – was released.

On Monday, the group began gathering throughout the morning, and the protest officially kicked off at 11 a.m. At least 100 people were present. Before the march, speakers advocated for peaceful demonstrations to show support for Floyd, who they said they viewed as another dead black man in a long history of black men murdered by law enforcement officers, who in the last year have been responsible for the deaths of black people both when the officers were on and off duty.

Throughout the event, they chanted “Black Lives Matter,” the name of the movement dedicated to protecting black lives from police brutality.

People gathered, some with their children, and many took off work to walk for an hour while the noon-day sun hung above their heads and the temperature crept to a sizzling 90 degrees.

Officers hung around the edges of the protest. They remained silent throughout, while on the outskirts of the crowd several policemen swarmed around a white man with a long white beard, and he quickly left thereafter.

The previous day, Sunday, a white man from Harrisburg wielded a gun and seemed prepared to fire the weapon into the crowd. Shots can be heard in several videos recorded of the event.

One protester said the violent act caused a drop in attendance on Monday, but the crowd still bustled down the street.

One of the event organizers, Yesenia Hernandez, the child of immigrant parents who arrived in the country without documents, said “I believe in love.” Hernandez spouted a message of love and peace throughout, reading a poem by Maya Angelou, one of Arkansas’ most famous residents, and also later said “but I also believe in war now.”

“No change will come unless we’re unified,” Hernandez told the crowd.

Throughout the day, speakers talked not only of police brutality toward black people but people of all colors, along with people with mental health issues and those living in poverty.

Hernandez told stories about her family’s own fears of the police and the power they have to separate her from her loved ones.

Throughout the petitions for freedom from oppression, there were calls for people to register to vote. At least 10 people signed up to vote during the meeting.

“We’re marching to the polls in November,” said Dominique Phillips, the president of the Arkansas State University chapter of the NAACP.

Members of the NAACP spoke throughout the event and voiced support but were not involved in its organization, Phillips said.

Reginald Prunty, a black man who is seeking state office in a state where few black people have been elected since Reconstruction, also talked at the event, encouraging those present to cast their ballots in the fall.

“If you’ve got a seat at the table, please take it,” Prunty said.

Phillips advocated for the importance of voting in local elections, where they elect officers who make direct impacts on the community.

“The interaction we had today with the police was not a negative encounter,” Hernandez said about the officers, who blocked off intersections for people to march down Main Street and circle back to the courthouse by Union Street.

Robert Lindholme, a 67-year-old man of Swedish descent, was brought to tears when the marchers took a knee for the 8 minutes and 24 seconds that Floyd remained on the ground.

Lindholme, who lived through the 1960s and is ashamed that his country is repeating its history, said that officers and President Donald Trump should be held accountable and held to a higher standard.

Throughout the almost 10-minute period representative of the time in which Floyd lost his life, people remained silent.

Many held their signs defiantly above their heads for the entire period. Mothers quieted their babies. Toddlers sat hushed upon the ground.