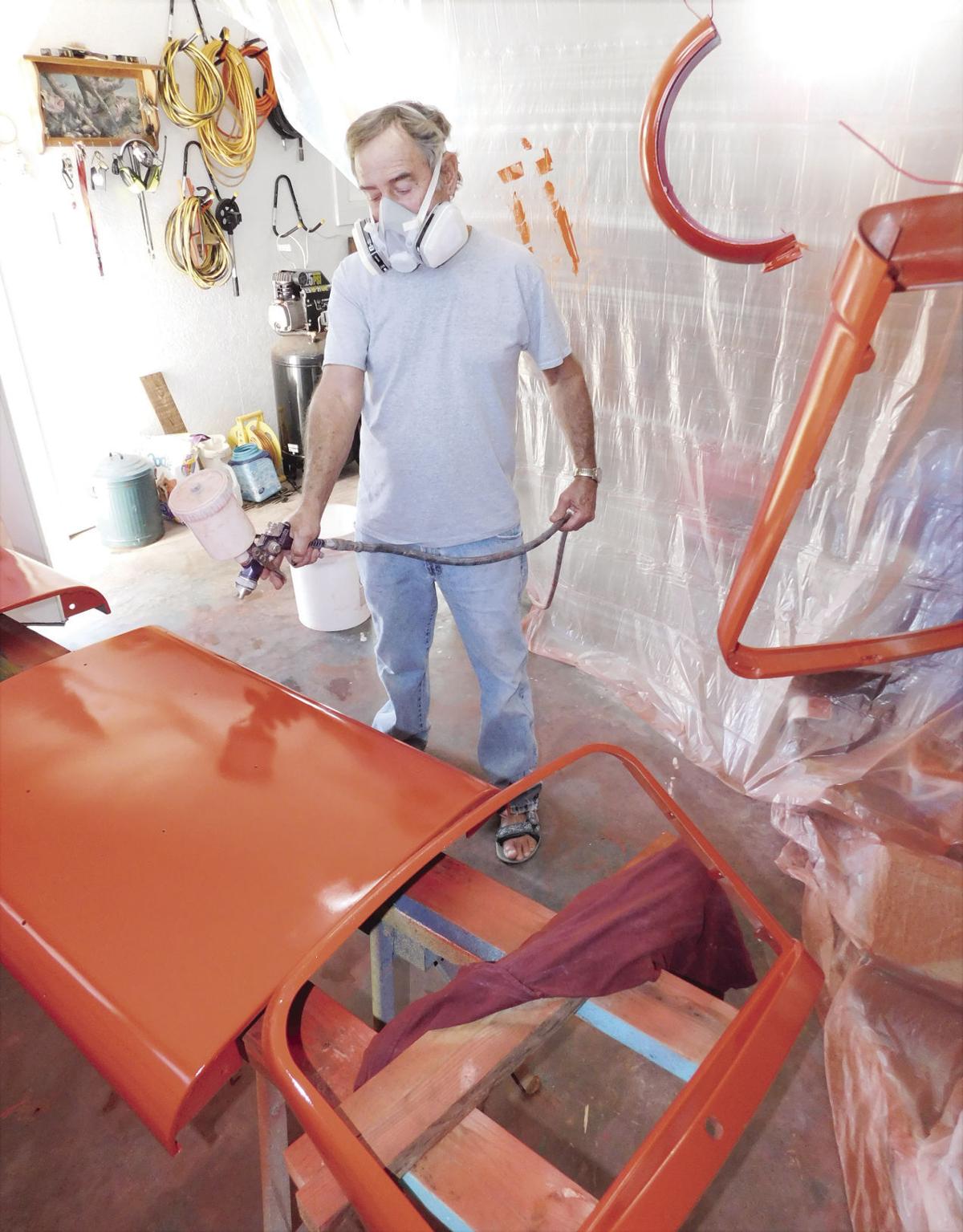 Richard Dust spray-painted a 1958 AO Smith Texaco gasoline pump in his workshop as part of his latest restoration project. 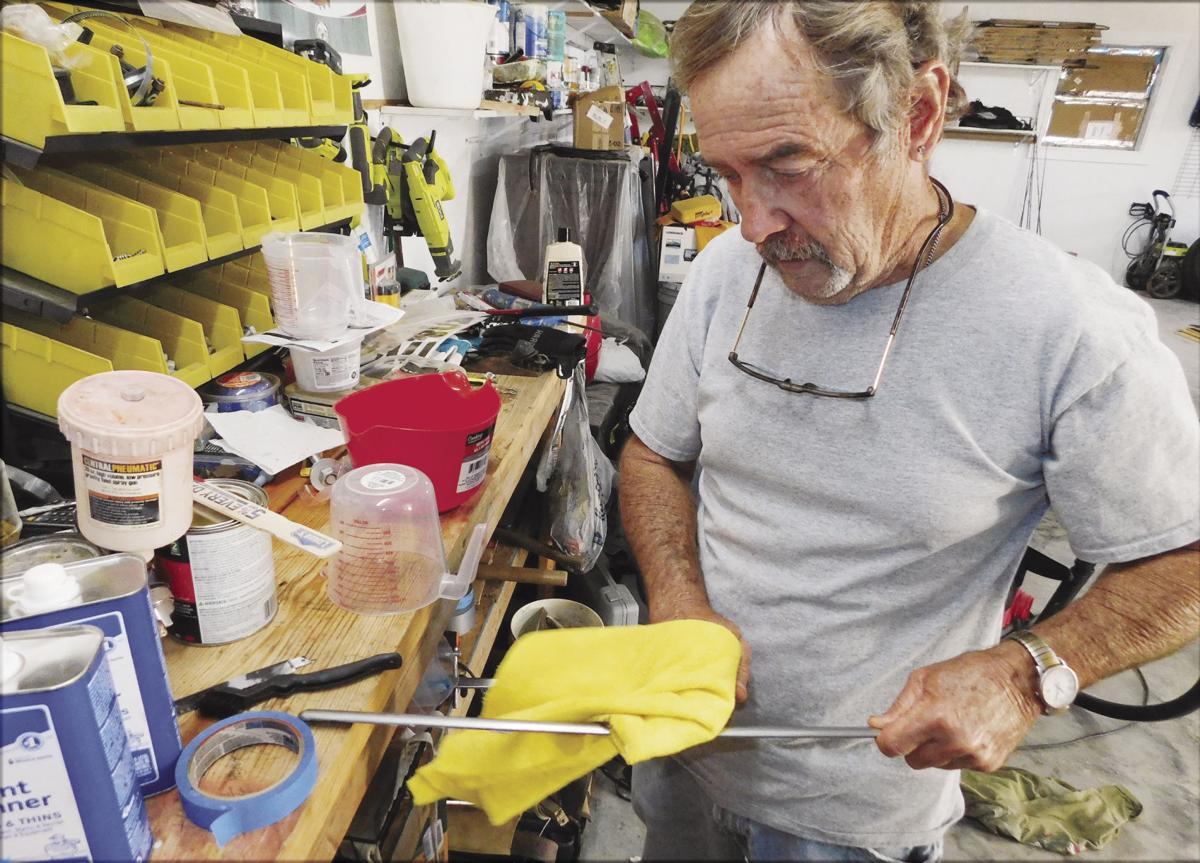 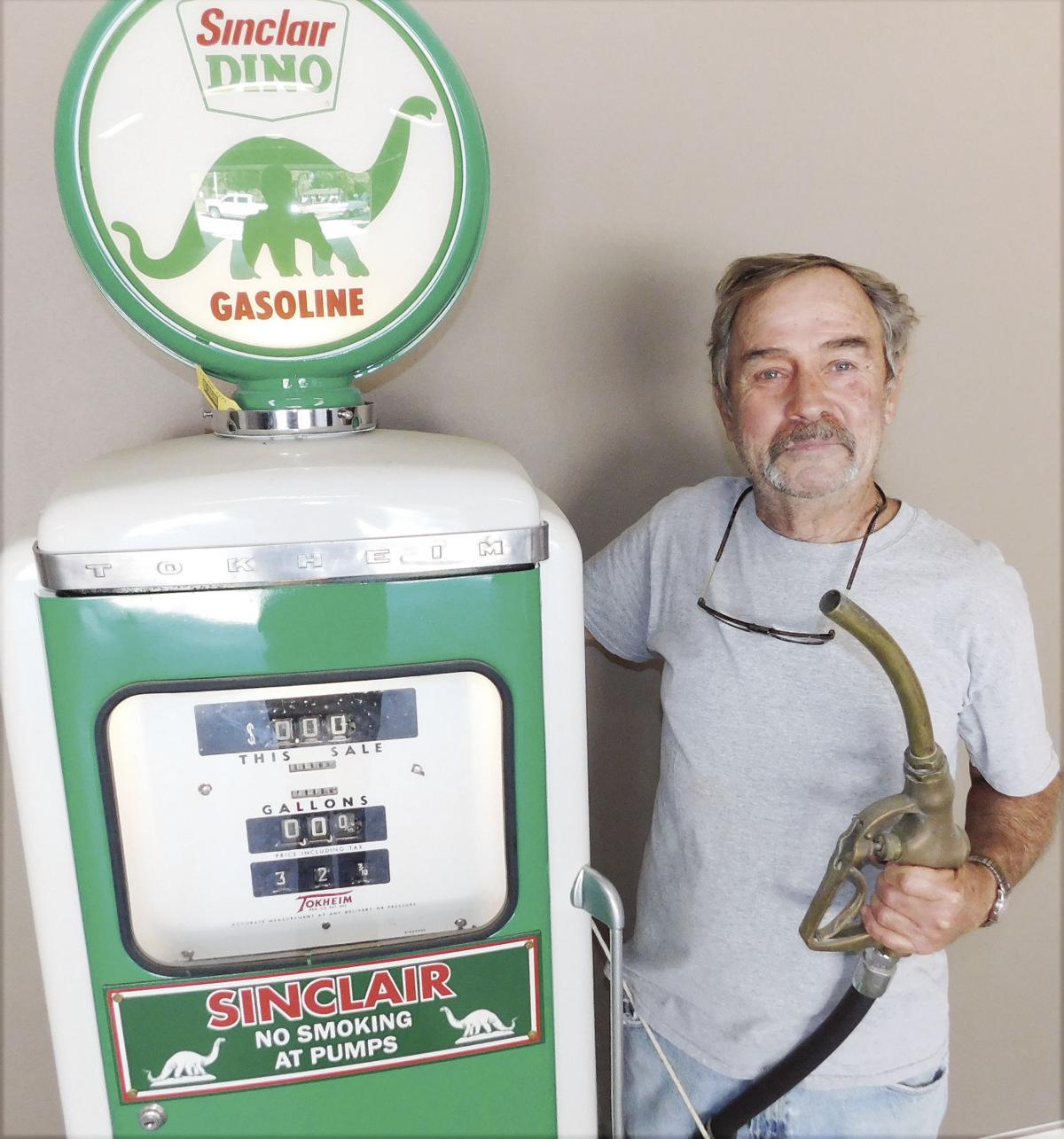 Richard Dust, who worked for more than a decade as an off-shore oil rig mechanic in India and Southeast Asia, shows off his completed restoration of a Tokheim Sinclair gas pump.

Richard Dust spray-painted a 1958 AO Smith Texaco gasoline pump in his workshop as part of his latest restoration project.

Richard Dust, who worked for more than a decade as an off-shore oil rig mechanic in India and Southeast Asia, shows off his completed restoration of a Tokheim Sinclair gas pump.

JONESBORO — As a mechanic on off-shore oil rigs for more than a decade in India and Southeast Asia, Richard Dust often found himself in tight spots.

Once while moving a massive oil rig across the Bay of Bengal from India to Singapore (they can actually float), a boatload of pirates showed up, firing automatic weapons at the oil rig workers.

“People don’t think there are pirates anymore, but there are,” said Dust, who was born and raised in Pocahontas. “They just came by and were shooting at us.”

Fortunately, the oil rig workers were elevated high above the sea, so the pirates’ assault caused more alarm than harm.

Another time, Dust was being flown to work on an oil rig in Borneo.

“The airplane, a World War II plane, had no compass, so the pilots would fly around the clouds to try to find out where they were,” Dust recalled. “I thought, if we crash, they will never find us.”

However, Dust was most scared the time when a cyclone was building in the Indian Ocean near the oil rig he was working on off the coast of India.

“The helicopter pilots wouldn’t fly out to pick us up,” Dust recalled, noting the weather was too treacherous to rescue the oil rig workers. “We had the rig platform 75 feet out of the water and the waves were hitting the bottom of it. We all had lifejackets on, but that wouldn’t have done any good in those seas. We sat through that for almost a week – just scared stiff. After it passed, the inspectors came out and found cracks in the rigs.”

Similar to his days working as relief chief engineer on riverboats, Dust said oil rig crews would work 30 days and then be off 26 days.

“They would fly us in and out,” Dust said of his trips home to Northeast Arkansas.

Now “semi-retired,” Dust’s life has settled down since his oil rig and riverboat days. But that’s not to say he’s bored. He and his wife Melissa, a nurse at St. Bernards Medical Center, are the grandparents of three. One of their daughters lives just down the road and the other nearby in Tennessee.

When he’s not bass fishing, working in his shop or mowing the acreage around his home in rural Jonesboro, Dust plays his drum set or electric guitar and has even started taking piano lessons. He’s been working on The Eagles’ “Desperado” and Beethoven’s “Moonlight Sonata.”

So, how do you get involved in restoring old gas pumps?

“A friend of mine used to own a cabinet shop and had some of those really old visible gas pumps, the kind where you had to hand pump the gas into the glass container to measure 2 or 3 gallons,” Dust said. “And he said, ‘Richard, you ought to rebuild one of those.’”

Dust noted that when he was “on shore, I couldn’t fish all that time,” so he started restoring antique gas pumps.

“It’s like putting together a big puzzle,” he said. “They made so many different pumps.”

Dust said he once found an old Gulf gas pump lying in a fence row.

“I don’t know what it was doing there. It was rusted so bad you couldn’t tell what color it was,” Dust said of the normally bright orange gas pump.

Dust’s most recently completed project is an electric green Tokheim Sinclair gas pump – circa 1955-60 – complete with dinosaur logos. He meticulously hand-polishes and has sandblasted each part to like-new condition.

If a piece is missing, he consults eBay or other internet websites as well as a company out of Washington state that fabricates parts for antique gas pumps. He recently secured some chrome pieces from an internet source in Indiana.

It’s a growing trend, with more and more enthusiasts restoring old gas pumps, he said. They’re perfect for man caves, tourist attractions or to sit in showrooms of businesses – as both art and conversation pieces.

Dust said he never messes with the dials on the old gas pumps he restores or puts the pump parts back inside because of the gasoline smell. For example, the Sinclair pump he restored last pumped gas at 32 3/10ths cents per gallon, which dates its last pump to the late 1960s.

Dust’s latest project is a bright red AO Smith Texaco gas pump, built in 1958 that last pumped gas in the 1970s or early ’80s because the dial price is set at 83 cents. He’s already painted the main parts of the pump and has secured chrome, glass and porcelain-coated signage to finish it off.

As for today’s gas pumps, Dust said they’ll probably end up in the scrap yard because they’re computerized and lack the artistic character of antique ones.