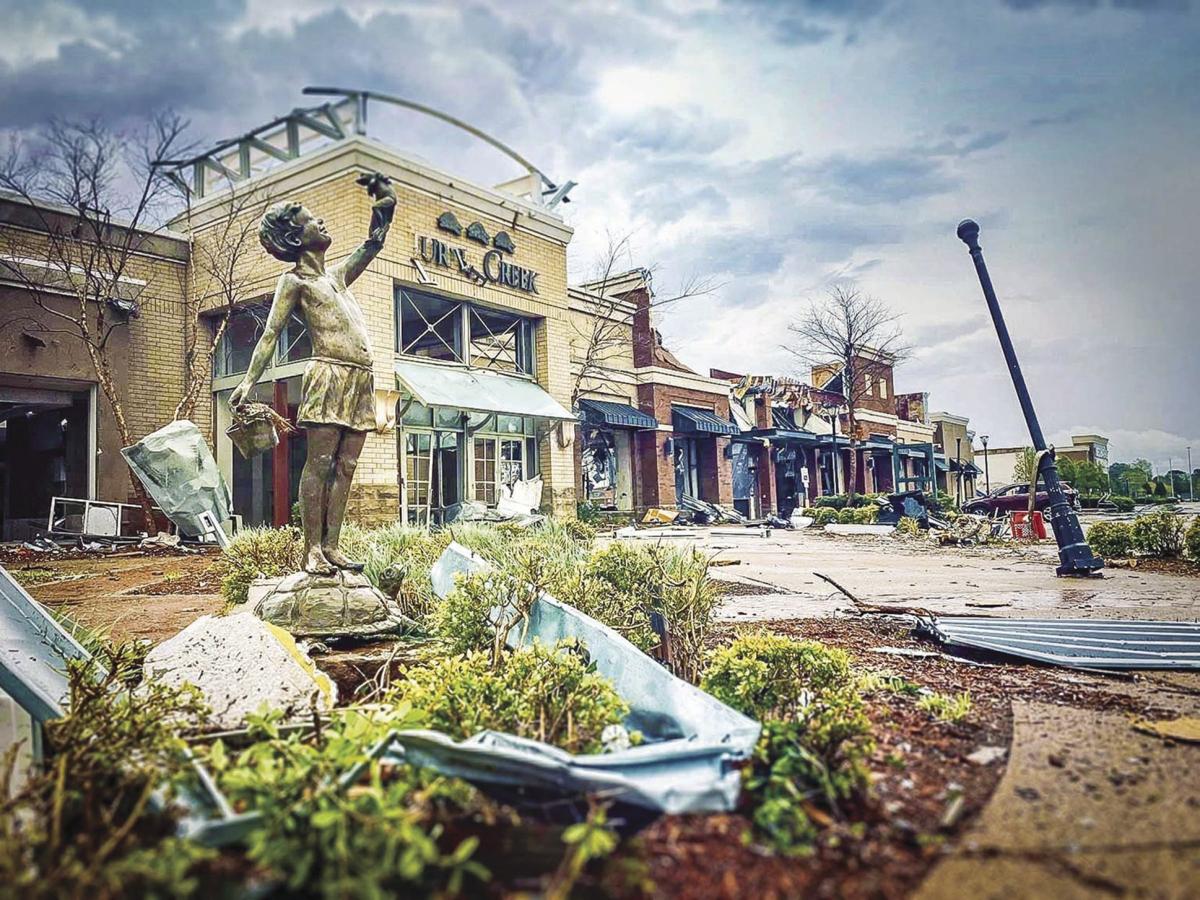 The Mall at Turtle Creek is pictured following a March 28 tornado that caused millions in damage and closed more than 60 stores.

The devastation of the March 28 tornado was still visible Wednesday at The Mall at Turtle Creek. Only three stores that occupied the massive shopping attraction have reopened

The Mall at Turtle Creek is pictured following a March 28 tornado that caused millions in damage and closed more than 60 stores.

The devastation of the March 28 tornado was still visible Wednesday at The Mall at Turtle Creek. Only three stores that occupied the massive shopping attraction have reopened

JONESBORO — Almost as if nothing happened, The Mall at Turtle Creek’s website and social media are promoting the Christmas shopping season.

But most of the mall is reduced to piles of rubble between three anchor stores – Dillard’s, Target and J. C. Penney.

The mall took the brunt of a March 28 tornado that some officials have estimated caused up to $500 million damage in Craighead County.

“The Mall at Turtle Creek sustained significant damage from the tornado that passed through Jonesboro today,” the mall posted on its sites. “We are grateful there have been no reported casualties. Our thoughts are with our community during this devastating time. We will keep you updated as more information is available.”

But many in the community have said there hasn’t been much communication. And as the months have passed, people who have been left without jobs as a result of the devastation have vented their frustration on the mall’s own social media.

Rick Jackson, general manager of the mall, said in an email it’s hard to provide answers at this point.

“We are reviewing the best options for the shopping center and community going forward,” Jackson said. “Due to the global pandemic, our timeline will be extended as we navigate this unprecedented situation.”

Brookfield Properties, which manages and develops malls and other retail and residential properties international, owns the mall. Jonesboro isn’t that company’s only problem.

Brookfield and Simon Property Group, another retail real estate giant, bought J. C. Penney out of bankruptcy. The U.S. Bankruptcy Court for the Southern District of Texas approved the agreement on Monday, The Associated Press reported.

More than two dozen retailers have filed for bankruptcy protection since the pandemic temporarily closed stores, restaurants, gyms and other businesses nationwide. Retailers are worrying about the effects on their business with a surge of new cases all over the country.

The 118-year-old J. C. Penney chain will shed nearly a third of its stores in the next two years as it restructures, leaving just 600 locations open.

With no other valid offers in sight, Penney’s fate was hanging by a wire. Its financing agreement expires on Nov. 16 and the sale had to close by Nov. 20 to avoid the company going out of business.

After the mall posted the announcement that J. C. Penney would reopen Aug. 7, following $1 million in repairs, someone asked when other stores would reopen.

“Please stay tuned to our website and social media for updates,” was the mall’s response.

On Aug. 14, the mall posted a back to school promotion:

“We’re here to make your school shopping a little easier. Stay ahead of the class with our amazing sales and deals for all of your school needs.”

Someone who apparently worked in the mall prior to the tornado responded: “The Mall at Turtle Creek stay tuned for updates?! It’s been over 6 months and there has been no update... the last “update” that I (or anyone else working physically in our stores) gotten from the mall was an email stating our store was condemned.”

About a month ago, Brookfield officials told the mayor they still hadn’t settled with their insurance provider. In the meantime, several former tenants have moved to other locations across the city.

“Now, whether they get them back into the mall or something, I don’t know,” Perrin said.

Last month, two locally-owned businesses, Gamble Home and Gearhead Outffiters, which lost their stores in the mall to the tornado, bought the former Sears building at Caraway Road and Highland Drive. Gearhead owner Ted Herget said he and Chris Gamble had grown impatient as they awaited information on the mall’s future.

Whatever Brookfield decides, Perrin said demolition and removal of debris from the tornado will be a massive undertaking.

“They’ll have to get all kinds of permits to take all that out,” Perrin said. “It wouldn’t surprise me if we probably wouldn’t have somebody just assigned out there to watch the whole operation when they start.”

The city took that approach to accommodate construction of the NEA Baptist Medical Campus, he said.