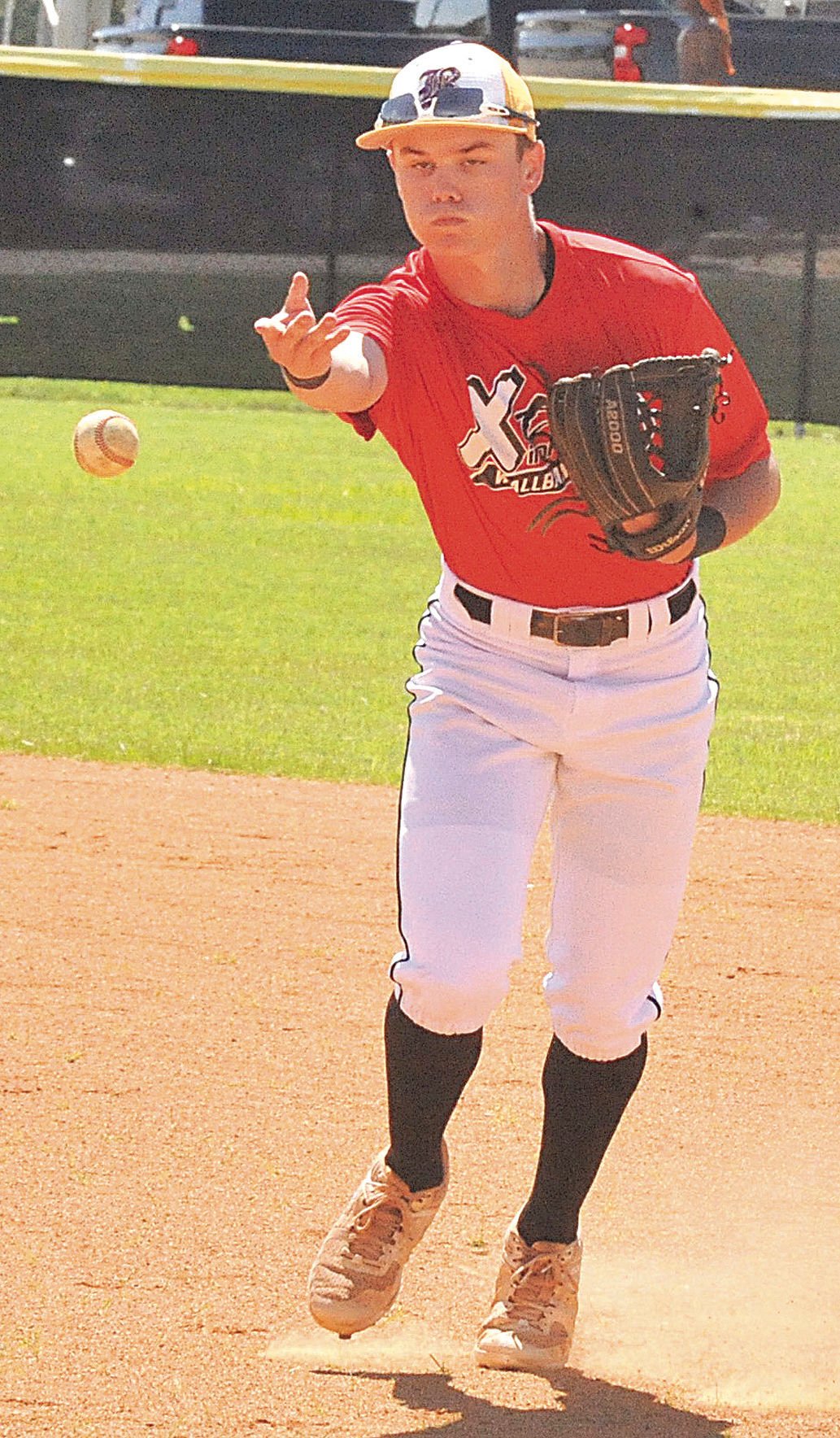 Bay’s Korbyn Hoyt flips the ball to first base during pro day drills Monday in the Xtra Innings Classic at Nettleton High School. 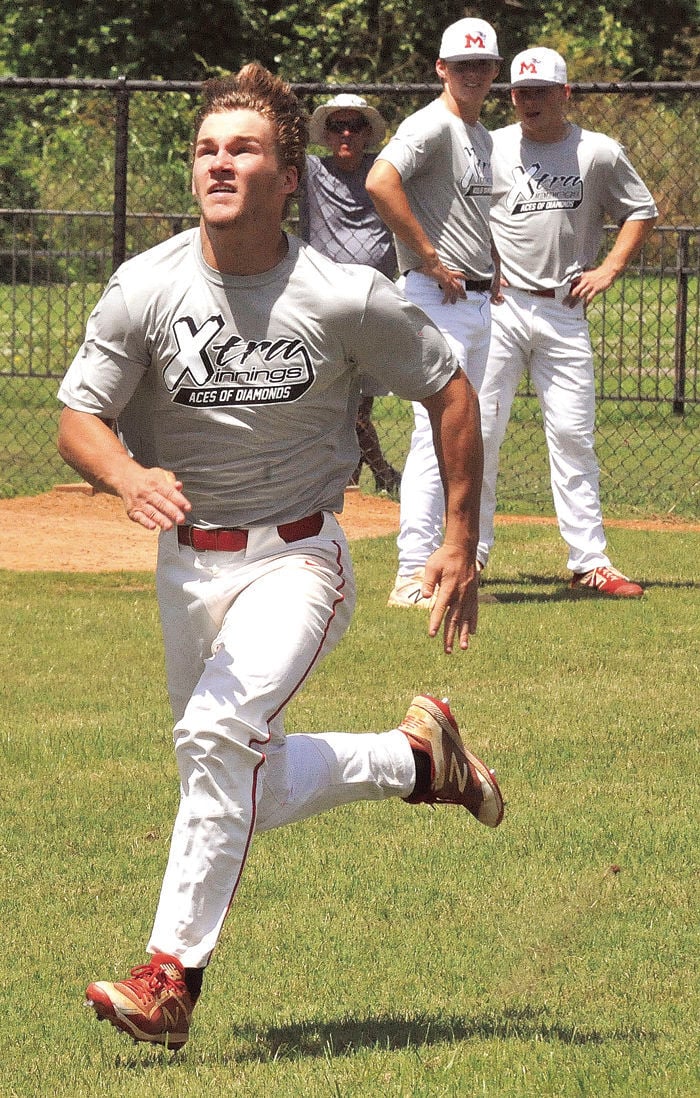 Bay’s Korbyn Hoyt flips the ball to first base during pro day drills Monday in the Xtra Innings Classic at Nettleton High School.

JONESBORO — The Xtra Innings Summer Classic is all about being seen.

The annual high school baseball showcase has offered the state’s top underclassmen that opportunity since the early 2000s. After a one-year hiatus forced by COVID-19, and a one-week delay caused by a rainy forecast, the 17th annual event began Monday morning.

Players participated in drills Monday morning at Nettleton High School before shifting to Arkansas State’s Tomlinson Stadium for two games in the afternoon and evening. Four more games are scheduled today at ASU.

“It’s good to see kids just being out here in general for baseball finally,” said Marion coach Pete Prater, who runs the event along with former Nettleton coach Wade Massey and their wives. “We got a full spring in and these kids, they’re going and going right now. We’ve had a good turnout.

“It’s been a little tougher. We got 88 here. We had to move it from last week because we thought it was supposed to rain a lot and it didn’t do a whole lot of anything. We lost some kids from that, so we had to find replacements. It is what it is. These kids are busy. We’re just glad to get it rolling again and get them back out here.”

Players were timed in 60-yard dashes Monday morning in addition to participating in on-field and batting cage batting practice as well as bullpen sessions for pitchers. Monday’s two games were scheduled for 10 innings with wood bats used.

All four games today, starting at 9 a.m., are scheduled to last seven innings.

“This is a good event. For the kids, it’s something special,” said Marked Tree coach Michael Wages, who is coaching one of the teams. “I told them this morning that every of one you can play, that’s why you’re here. It’s elite competition you don’t see every day. You’ve got the best players off every team out here, so you’re going to get to see how good you really are.”

Eighty-eight players are selected from across the state through a draft process. About a quarter of those initially selected had to be replaced, Prater said, and the event lost a few more when it was pushed back from June 7-8 because of the weather forecast.

Still, there are plenty of players happy to have the opportunity.

“I’m glad to be invited to this, you know, to come out and show my talent for some coaches and maybe get myself out there,” Brookland’s Jack Henry Pettit said.

Pettit has a busy summer schedule with the Rawlings Arkansas Prospects team coached by Delta Cleary. The team has played in two tournaments, Pettit said, and will leave Wednesday for another tournament in Fayetteville.

Prater said working around other summer baseball events is difficult, which is why Xtra Innings is now held on a Monday and Tuesday.

“About 95 percent of them play some type of summer ball and if they’re those travel ball kids, we’ve got some who just got back from somewhere last night at 2:30 this morning. Hopefully they’ve come prepared, come refreshed,” Prater said. “It’s different. Baseball is a different animal right now. Some of these pitchers we’re going to throw, they might have thrown Saturday or Sunday. Are we going to get the best of them? We don’t know, but it is what it is and we try to work with those teams and do the best we can.”

Pettit said he hoped to pitch a few innings in the Xtra Innings Classic, adding that he pitches in relief most of the time on his travel team. He pitched 53 1/3 innings as a junior this year at Brookland, producing an 8-0 record and a 1.97 earned run average while striking out 92 batters.

“I usually pitch in relief most of the time because we have a bunch of POs (pitchers only). I’ll just finish out the game,” Pettit said.

Baker, the Best Under The Sun Newcomer of the Year in football, is taking a break from football preparations to participate in Xtra Innings. He batted .396 this year with 31 RBI and 49 runs scored as an outfielder for Pocahontas.

“I’m happy I’m here and I’m glad I got invited,” said Baker, an outfielder who is not playing baseball this summer. “I think it’s going to be very fun.”

At least a couple of players in Xtra Innings, both from Marion, have already made college commitments. Prater said Gage Watson is committed to Missouri while Chase Armstrong has committed to Arkansas State.

Prater said all games in this year’s event will be livestreamed, offering college coaches another option to check out prospects.

While Xtra Innings includes players from every classification, Prater said the event can be especially beneficial for players from smaller schools, citing his assistant coach Jason Dahl as an example. Dahl, who is from Des Arc, played for Southern Arkansas after participating in Xtra Innings.

“I’m not going to say we don’t have big school kids here. Obviously we need that talent here and if they’re one of the best, we need them here,” Prater said. “But the small schools, even with travel ball and all that, to me it’s still a benefit, a one-stop shop for them. They might have a coach at a smaller school who might have just got stuck in baseball and they don’t know how to get information out or video out to these college guys.”

Prater said he doesn’t press college coaches for commitments to attend Xtra Innings and doesn’t promise a certain number will be in attendance.

“We’re low in number on college guys being out here, college coaches. We average about 25 every year, but it’s gotten harder and harder and we’ve had upwards of 45 out here,” he said. “It’s a crap shoot, but again, we’re doing it for the right reasons and we’ll continue to do it until we feel like it’s no longer a service.”