“The state Department of Commerce had requested $300 million for rural broadband,” said State Rep. Fran Cavenaugh (R-60th District, which includes parts of Lawrence, Randolph, Sharp, and Greene counties), “but we approved only $150 million.”

According to published reports, the state has received a total of $5 billion, of which $1.57 billion is come through the steering committee.

“And there were people that had already applied for that $150 million that we just didn’t have the funds for,” she said. “So we went ahead and approved that.”

The CARES Act – the Coronavirus Aid, Relief, and Economic Security Act – is a $2.2 trillion economic stimulus bill signed into law on March 27, 2020, in response to the economic effects of the COVID-19 pandemic.

However, Cavenaugh said, additional funds for rural broadband expansion should await additional information. “Instead of just throwing more money at it,” she said, “we need a strategic plan about how it’s going to be used, where the needs really are, who’s not got service.”

She said the committee’s action did not technically constitute “approval” but a recommendation to go before the Arkansas Legislative Council for approval or disapproval. The Legislative Council, on which Cavenaugh also sits, undertakes needed legislative functions when the legislature itself is not in session.

She said the committee will continue to meet on how to allocate the American Rescue Plan Act funds. “One of my goals is to see if we can use some of that money to alleviate the levy issues that we have over here,” she said. “About every five years we have major flooding, these historic floods.”

She said one of the intended purposes of the American Rescue Plan Act is to address infrastructure, waterways, sewers and similar needs. “So we’re hoping we’ll be able to use some of that money for [flood control],” she said.

The American Rescue Plan Steering Committee, created by and executive order of Gov. Asa Hutchinson on May 11, consists of Cavenaugh, two other state representatives, three state senators and the secretaries of eight of the 12 state departments. It is charged with studying and analyzing relief available under the American rescue Plan Act of 2021 to the state, its citizens and its businesses.

It is also to identify and prioritize the needs of the state, its citizens and its businesses; identify the best way to get and apply the funds and make recommendations to Gov. Hutchinson for the funds’ best uses. 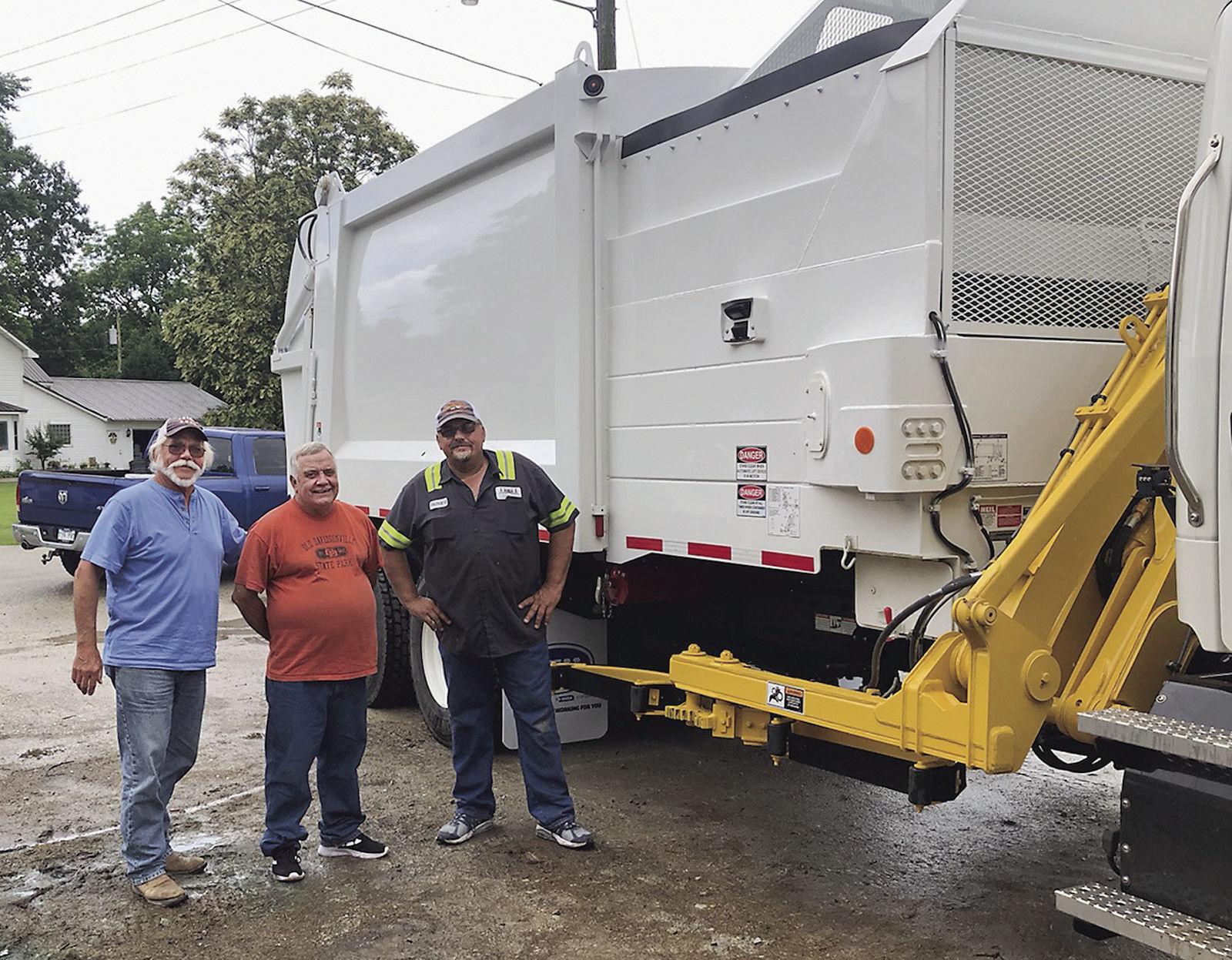 Walnut Ridge Mayor Charles Snapp (from left), Donnie Milgrim and Richard Bice show the city’s new garbage truck with side lift for garbage collection. The new truck arrived on Monday and will help improve the efficiency of the garbage collection process for the sanitation department. 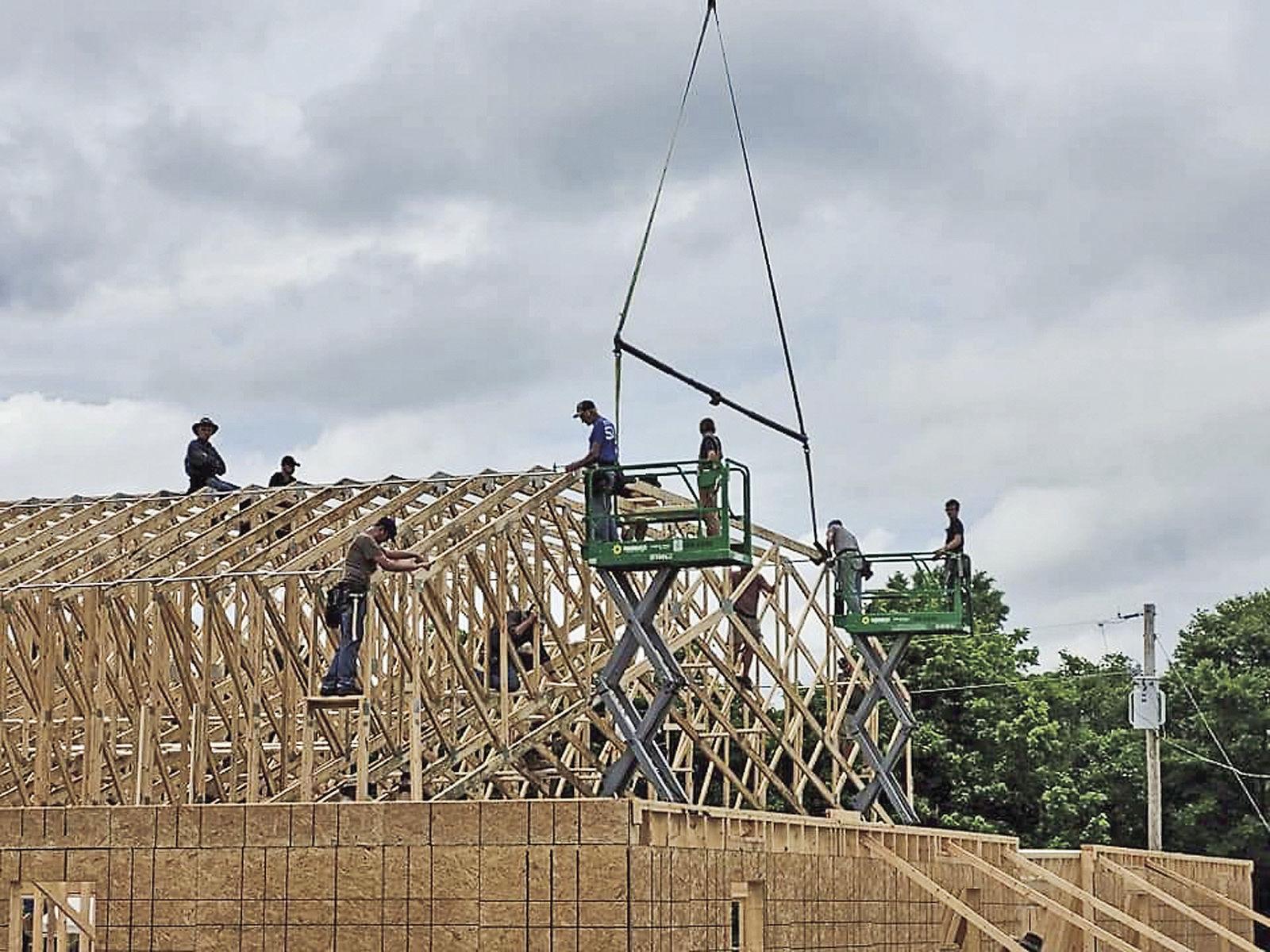 Smithville Baptist Church’s new building is progressing quickly with assistance from Carpenters for Christ, who arrived last week to join members of the community in constructing the new sanctuary.

The Times Dispatch is holding its 29th Summertime Photo Contest.

Categories have been set for the contest, and those entering photos are asked to designate which category they want their photo to be judged in. Photographers are reminded that the judges generally prefer candid photos rather than posed photos.

Photographers are limited to five entries in the contest, which can be mailed or emailed. Those entering the contest are asked to write name, address, telephone number and category being entered on the back of the photo with a nonsmearing ink pen or attach a note with tape. Emailed entries should also include that information.

Individuals are also asked to identify the scene and/or people in the photo and give a brief description of where they are and what they are doing.

Those who wish to have their photos returned should send a self-addressed, stamped envelope with the entry. Winning entries will be published in The TD.

The Hoxie City Council voted at its May meeting to approve a lease for the Historic Highway 67 from Hoxie to the city limits of Minturn.

Mayor Dennis Coggins advised that the city would be responsible for keeping the roadside mowed. Plans are to develop the old roadway into a biking trail.

The city will have a 99-year lease on the road at a cost of $1 a year for the lease.

Also at the meeting, an ordinance was passed establishing district court session for the City of Hoxie.

Mayor Coggins explained that nothing was changing, the ordinance was just something needed for new District Judge Alex Bigger.

a moment of remembrance was held for city employee Kenny Tyler, who died in an accident while working for the city. Prayers were lifted for his family.

The council heard an update on property that has been ordered to be cleaned up.

Resident Mike Stroud complained that his water bill had been high. Mayor Coggins said the city would look into it.

A brief executive session was held to discuss a personnel issue with no action taken.

A new interactive game presents a fun way to learn about the musical history and colorful past of Downtown Walnut Ridge. Known as Trivia at the Ridge, players can access the game on their smart phones or other electronic devices.

Trivia at the Ridge is an on-site game that utilizes information displayed at Beatles Park, Guitar Walk at Cavenaugh Park and historical plaques in downtown Walnut Ridge. It is played as a self-guided walking tour of the downtown area.

GPS is not required, but players will likely need to read signs and visit popular spots to get most of the answers.

The game was developed by the City of Walnut Ridge and the Downtown Walnut Ridge organization in conjunction with Eksplor Gaming, an Arkansas company that develops online games and entertainment for visitors to travel-related areas.

“Trivia at the Ridge is a really creative means to engage tourists with the attractions of our downtown area,” said Walnut Ridge Mayor Charles Snapp. “We’ve had a lot of fun preparing this game and getting trivia questions together, along with Phil Shellhammer at Eksplor, and we are anxious for visitors and locals both to give it a try.”

Walnut Ridge sits on the officially designated Rock ‘n’ Roll Hwy. 67, so named because of the musicians who performed at venues along the route in the 1950s. The city has added prominence on the route because of the Beatles’ stopover at Walnut Ridge Airport in September of 1964.

The Walnut Ridge blood feud ran for a decade, from 1905 to 1915, claiming the lives of seven people and injuring others from rival factions in the area.

Trivia at the Ridge can be accessed at https://www.eksplor.app/start? experience=walnutridge1