News
WR to apply for grant, move forward with lawsuit

At Monday night’s meeting, the Walnut Ridge City Council voted to move forward with two grants and file a lawsuit against JR and Michelle Rogers to recoup expenses in the demolition of a building on Abbey Road.

Council members passed a resolution authorizing the mayor to seek grant funding to improve the city’s recreation facilities. The grant, if approved would include approximately $265,000 worth of improvements at Stewart Park including upgrades at the city pool, the playground and the baseball fields.

The grant also includes funds for repairs to the large pavilion, work to make bridges on the sidewalks ADA compliant, a new entrance sign and a disc golf course.

The grant, which is through the Arkansas Department of Parks, Heritage and Tourism, is a 50/50 matching grant. Mayor Charles Snapp said with engineering fees, if the grant is approved, the city’s share of the expenses should be around $150,000.

Mayor Snapp did note that there will be additional monthly fees of $360 a month for hot spots for the equipment to work in the patrol cars.

Chief Jordan Cooksey said the new equipment will allow the department to be able to use E-Cite to better track offenses from other departments, as well as complete accident reports quicker.

“It will revolutionize what we do,” he said.

He said this system is expected to become mandatory, and they were fortunate there was another round of grant funds.

Also on Monday, council members heard from City Attorney Ethan Weeks that both the Mullens and the Steeles had paid in full their part of the costs for both the demolition and cleanup of the building that was removed on Abbey Road.

Weeks also told the council that he had been in communication with both JR and Michelle Rogers, and that he understood at this time they did not have an attorney but might consider getting one.

“They have agreed to pay the demolition cost, which they had agreed to previously,” Weeks said. “We could give them a short time and hopefully prevent litigation.”

Weeks also suggested sending a letter with a written agreement regarding payment for the cleanup cost, offering the same deal the other owners have already paid.

“I say file it,” Council Member Angie Abbott said. She noted that JR Rogers attended a meeting and verbally agreed to pay the demolition cost two years ago, and she did not think another 30 days was going to make a difference.

Her motion received a second from Council Member Wendell Jones.

Council member Steve Benesch countered that since the line of communication was open, giving them 30 days to pay couldn’t hurt.

The council voted to move forward with the suit with five voting for and three against, with the dissenting votes being Benesch, Ty Callahan and Bryan Butts.

voted to close the western portion of Corbet Street as requested by property owners on both sides of the undeveloped street. A 10-foot easement will remain for underground utilities should property west of the closed street ever be developed and annexed into the city limits.

approved on second reading a sanitation rate change for non-residential customers from $12 for the first cart and $9 for each additional cart to $15 per cart regardless of the number of carts required. The third and final reading will be completed at next month’s meeting.

heard an update on proposed street overlay projects. A rating system was used to prioritize the work, and bids are set to be opened on Sept. 3.

approved the appointment of Brad Flippo to the Planning Commission as recommended by Mayor Snapp. He takes the place of Adam Pratt, who resigned due to schedule conflicts. 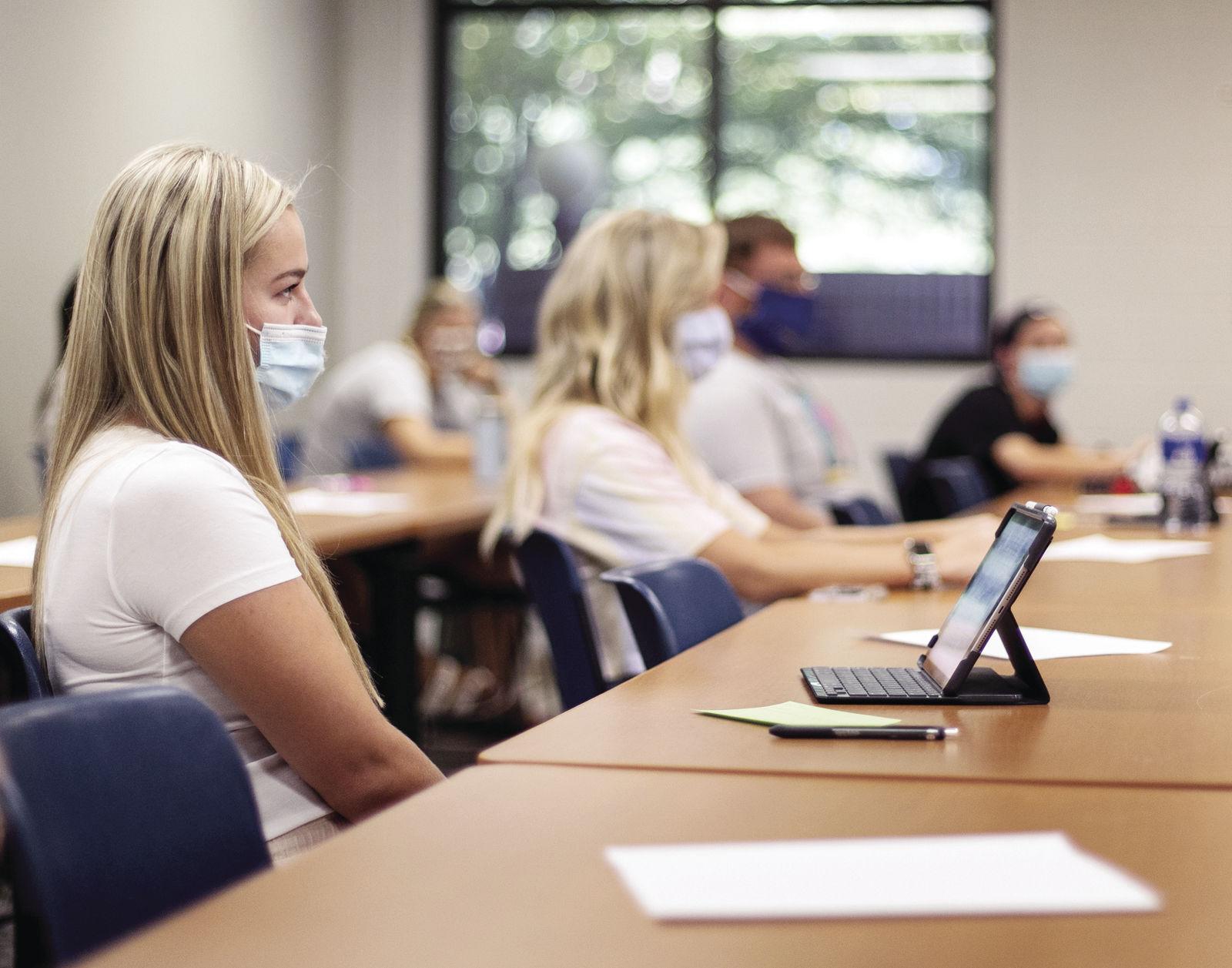 College looks a little different this fall for Kayla Harp, a sophomore from Bono, and other Williams Baptist University students who started classes on Monday. Facemasks, technology and social distancing are the buzzwords for fall semester thanks to the continued spread of COVID-19.

As of Tuesday morning the total cumulative positive cases of COVID-19 in Lawrence County was 231, with 204 of those having recovered.

The active case county was down to 18, with nine deaths being reported again. Recently the death count was increased to 10, but then lowered again to nine.

Meridith Holsapple, director of the local health unit, said the discrepancy was probably due to a reporting error.

Holsapple also noted that delays in getting results from commercial labs have resulted in some positive cases already being recovered by the time they are officially listed by the Arkansas Department of Health.

“By the time we get them counted, they are already over the active part,” she said.

This reinforces the importance of following guidelines to quarantine while waiting for test results, according to County Judge John Thomison.

“Our active case count is down, but it’s still scary,” he said. “School is starting back. We are not sure what to expect.”

He said talking with neighboring county officials, it is apparent that the virus is community spread now.

“You can’t pinpoint it to one gathering or one event,” he said. “I like the way Lawrence County has trended. I think the measures are working. Everyone just needs to follow the rules and respect others, respect themselves and the virus.”

Lawrence County Judge John Thomison said while some parts of the county are ahead of the state in Census reporting, the county overall is behind.

In addition, with no part of the county having reached 70 percent reporting as of Monday, Thomison said it is vital for those who have not responded to do so.

Three communities have surpassed the 60 percent mark with Powhatan at 68.8 percent, Walnut Ridge at 66.6 percent and Hoxie at 64.8 percent.

Nearly all the other communities have reached at least 50 percent, other than Minturn at 36.7 percent and Black Rock at 47.9 percent.

Census officials have begun canvassing efforts to reach residents who have not completed the survey.

Thomison said it is extremely important for a rural county like Lawrence County to have all residents respond.

“For the next 10 years, the amount of money coming into Lawrence County will be determined by this Census,” he said. “It will affect us all.”

The Hoxie City Council approved two reuse loans at its meeting on Aug. 11.

Michael Sanders applied for a loan for his heat and air business, Decker Heat and Air. Sanders told council members that he is ready to expand his business and needs a physical location to accept deliveries and store equipment.

He will be purchasing property on Cooper Street from Kenny Franks that includes three shop buildings, a house and two acres of ground. He said he also plans to hire four additional employees.

Memphis Williams applied for a loan to open Memphis Ray BBQ in the former Hoxie City Hall building. His application stated he would rent the building through December of this year then purchase it in January for $65,000 using a reuse loan.

The money paid in rent would be applied as part of his down payment.

“My goal is to come here and make a good go of doing barbecue,” he said. “I want to make it a destination.”

The council voted unanimously in favor of both loans as recommended by the Reuse Committee.

Council members were reminded that if they have any input on occupational license fees to submit it over the next couple weeks. City Attorney Nancy Hall and City Clerk/Treasurer Peggy Miles are working to streamline the fees.

discussed a contract with Don Nichols to move his containers out of the Hoxie City limits. Details are being finalized, and Council Member Darrell Pickney expressed his support of the effort. “I think it’s worth it to get rid of this long-term eye sore.”

approved the cleanup resolution for the 2019 budget.

discussed the city-owned housing development and what might be the best management program for it in the future. Council Member Tim Taylor requested that the current manager attend the next council meeting so an informed decision could be made.

was informed that any changes to the employee handbook need to be submitted because is scheduled to be voted on at the September meeting.

The hearing was held Aug. 12 in Lawrence County District Court for the offenses of murder, abuse of a corpse and tampering with evidence.

It was reported in last week’s TD that Jaylane Joslin was being held at the Lawrence County Jail in connection with the investigation of the death of Kelsey Joslin, who had been reported missing by family members earlier in the week.

News
School set to begin next week in LawCo.

Hoxie Elementary School librarian Heather Kepner works on a bulletin board in the school’s hallway on Tuesday morning in preparation for the beginning of school next week.

Lawrence County’s schools are making their final preparations for the new school year this week, with most schools set to start classes on Monday.

Hillcrest, Hoxie, Sloan- Hendrix and the Imboden Area Charter School will all have their first day on Monday, while Walnut Ridge has set its first day for Wednesday, Aug. 26.

In general all students who are doing on-site learning will report to school the first day. At Hoxie and Sloan-Hendrix, kindergarten students will have a staggered schedule the first week to allow the students to come in small groups.

All students at IACS will do a blended curriculum. The students have been divided into two groups and will be alternating days of on-site and virtual learning.

Hoxie School has also announced plans to pivot to off-site learning on Friday, Aug. 28, for all students.

“We are using that to test our system,” Supt. Kelly Gillham said. “It will help us test the capability of our students, learning management system and teacher and see what changes we would need to make.”

In the four K-12 school districts, many students have opted for virtual learning.

As of Tuesday, Walnut Ridge had 125 students signed up for virtual learning, with registrations still coming in.

According to Supt. Terry Belcher, the students are pretty evenly spread out among the different buildings.

Hoxie had 150 students enrolled in its online academy, 100 of whom had moved from on-site learning within the district.

“We have about 50 who were either already enrolled in the academy or moved from another area,” Gillham said. “There could be more by the end of the week.”

Hillcrest Supt. Greg Crabtree said his district is being pretty flexible with the registrations, with the current count being 118.

“Roughly 30 percent have said virtual, but that doesn’t necessarily mean that will be the final count,” he said.

Sloan-Hendrix had 131 signed up for virtual learning as of Tuesday morning.

“The number is growing each day,” Supt. Clifford Rorex said.

For all administrators, the key is to remain flexible and ready to adapt to whatever changes come.

“We’re following every safety procedure and protocol that we can, and we will do everything we can to keep the students safe and go day by day,” Crabtree said.