Debi Hart, executive director of the housing authority, said she received a call early Thursday morning about the fire at her building, which ended up being a total loss.

Hart said she has set up a temporary office in the Larkspur Gardens Community Center, located at 109 SW Larkspur in Walnut Ridge, and those with housing questions can reach her for the time-being at 870-679-1620.

Plans are in place to move the office to the former Cavenaugh Dodge sales office building, located at 118 East Main Street.

The building adjacent to the housing office, which was currently being used for storage, was also destroyed in the fire. The historic two-story building, originally built as a mercantile by P.B. Hill, has been the home of Grimes Hardware, Wilcoxson and Sons Furniture and That Shop, among others.

Firefighters from multiple departments worked for several hours to keep the fire from spreading to nearby buildings, including the Lawrence County Library.

Ashley Burris, director of the library, said the building did receive some damage. Most of the damage was smoke damage, but there was a small fire, which was quickly contained, and firefighters had to make a hole in the roof to vent the smoke.

While the library is closed for cleaning, it could have been much worse, and appreciation was expressed on the library’s Facebook page, “So thankful for all our area firemen – this was a group effort! Can’t say enough ...”

While firefighters battled the blaze, a two-block area of downtown Walnut Ridge was closed to through traffic. Even after the initial blaze was contained, firefighters remained on the scene until 6 p.m. keeping the fire under control and preventing any rekindling.

Walnut Ridge Fire Chief Frank Owens said firefighters had to return to the scene for several days to battle hot spots in the rubble.

Police personnel from the Walnut Ridge and Hoxie police departments and the Lawrence County Sheriff’s Department also assisted with traffic control, and Pro Med, Arkansas Excellent Transport and Medic One ambulance services were on standby at the scene.

He also expressed his appreciation to the Walnut Ridge Street Department for their assistance, as well as the Lawrence County Road Department for helping with clearing the street and piling the rubble.

The programs began Monday and will continue through September, with monthly amounts increased from $500 per month to $1,500 per month.

The assistance is designed to ease substantial accumulated bills and will be filled on a first-come, first-serve basis. Shut-off notices are not required, but a past-due notice is necessary to qualify. 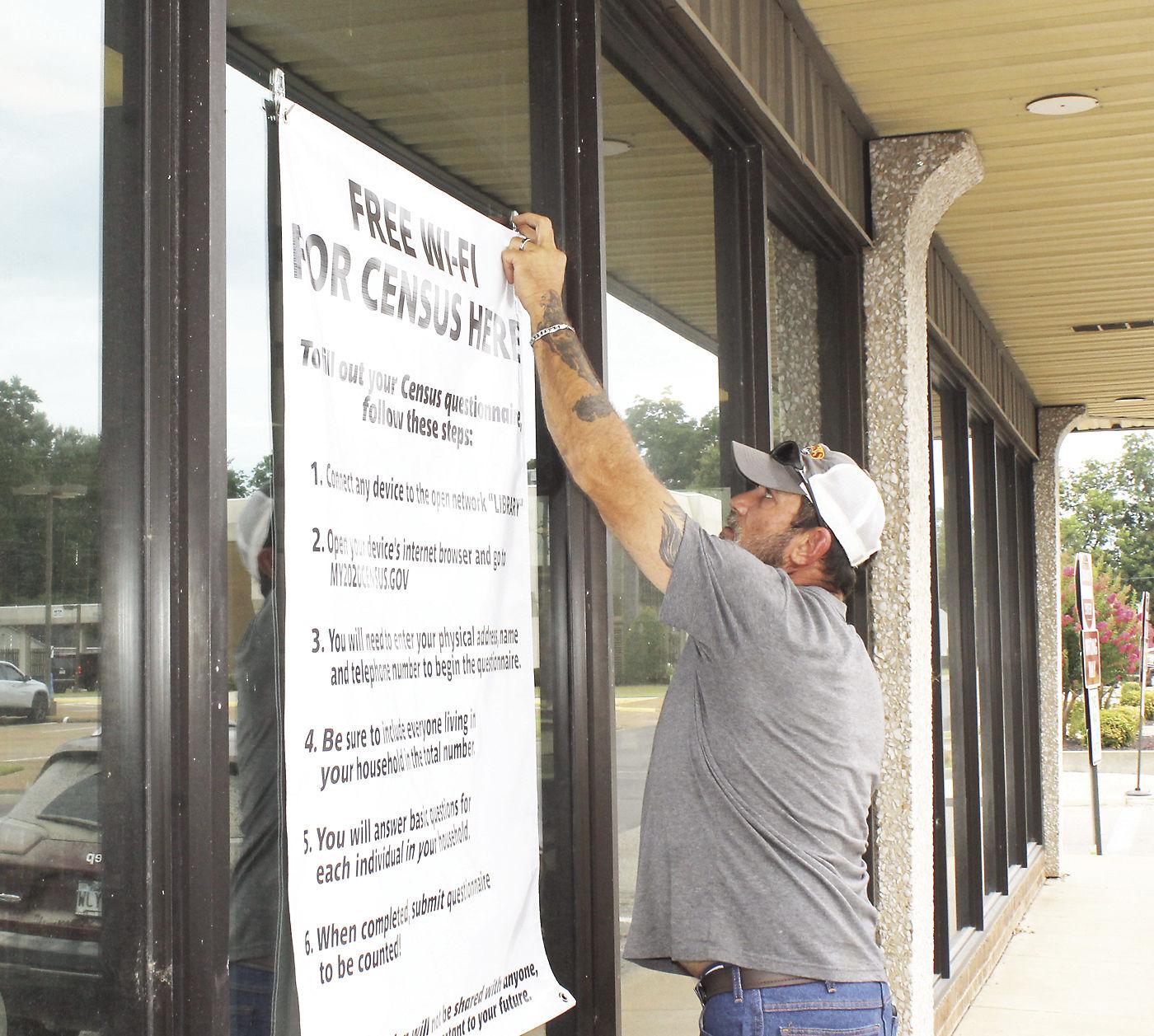 Shannon Fisher, department head of the Walnut Ridge Street and Sanitation Department, hangs a banner at the Lawrence County Library with instructions on how residents can use the library’s free Wi-Fi to complete the Census. “You can stay safe in your vehicle and still be counted,” Mayor Charles Snapp said. Banners can be seen from West Walnut and NW Second streets. Snapp said it is important for all Lawrence County residents to be counted as it will help determine funding and services for the county and its municipalities for the next 10 years.

Commissioners authorized Manager Stacy Hoggard to move forward with cleaning up an area southwest of the newer hangars.

Hoggard said there are some concrete slabs and other issues that make it impossible to keep the area mowed. She said plans to apply for state grants to add additional hangars would also benefit from having the area cleaned up.

“We are hoping to get a hangar grant, but we need to cleanup that area even if we don’t get that grant right away,” she said.

In addition to authorizing the cleanup, commissioners also authorized Hoggard to move forward with two grant applications. One, a 50/50 grant to add additional hangars, and the other, an 80/20 grant to extend taxiways and ramps to the new hangars.

She said there is a waiting list for individuals who would like to have private hangars at the airport.

Depending on costs and the amount of grant funds received, Hoggard said she is hopeful the airport could add four to six new hangars.

Commission Chair Don Cavenaugh said hangar space is profitable for the airport because the tenants pay rent and purchase fuel.

Also on Monday, the commission voted to allow Laco Manufacturing out of the remainder of its lease.

Judy Goodwin, who represented Laco at the meeting, said the business has been in operation 50 years, but recently lost its most valued customer when they decided to start doing everything in house.

“Our business just dried up,” she said.

Two and a half years into its current five-year lease, Laco will pay rent the next two to three months while the facility is being emptied.

Commissioners discussed options for the building in the future including using it for group hangar space or for an aeronautical business since it touches the runway.

Hoggard reported that rehab work on 13/31 and 04/22 continues. Sept. 22 is the deadline for the work to be completed.

it was announced that plans for a visit by a B-17 for tours and rides later this year have been canceled. The visit was planned to correspond with the Thunder over the Rock event, which was canceled, as well.

Hoggard reported that the airport still has approximately $8,000 of the $30,000 in CARES funds received.

commissioners decided to not make repairs to the roof on Hut #4 at this time as it was not deemed cost-effective. The proposed repair was expected to cost around $8,000 with no guarantee that it would prevent the roof from leaking. The tenant will be allowed to continue the lease if willing.

News
Cases down after spike
By GRETCHEN HUNT Editor
07.29.20

As efforts to stop the spread of COVID-19 continue across the state of Arkansas, Lawrence County reversed its upward trend this past week.

After seeing the active cases more than double from 16 to 36 in a week’s time, the new Arkansas Department of Health report on Tuesday showed Lawrence County’s active case count at 23.

Recoveries have increased from 97 to 126, and the county has no new deaths with the report still showing nine people having died due to the virus.

A statewide mask mandate remains in place as preparations are being made for the beginning of a new school year, slated for late August.

All Lawrence County School districts were able to hold their graduations ceremonies, with the final commencements held over the weekend in Hoxie and Walnut Ridge. 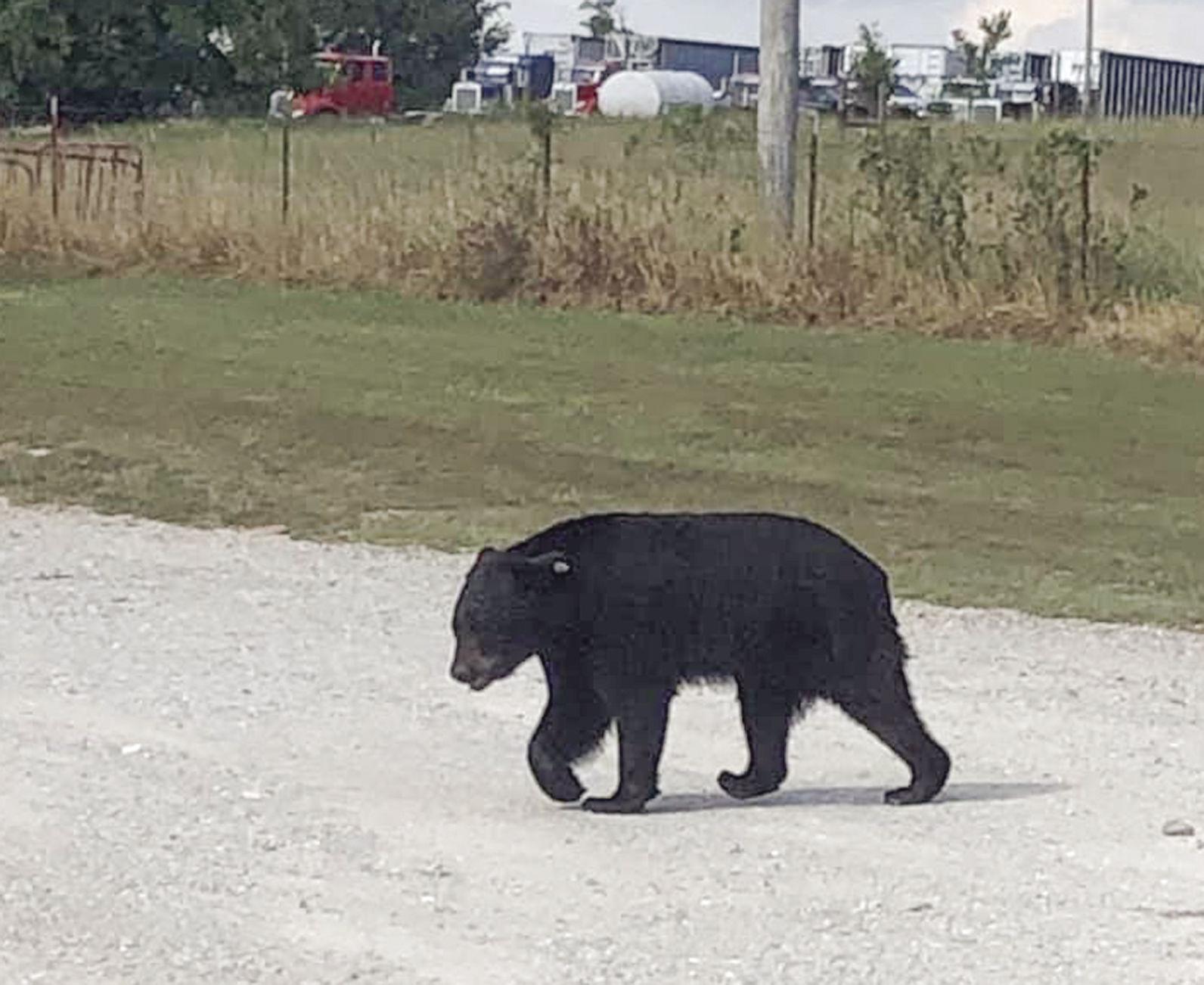 Many caught sight of Bruno the Bear as he traveled through Lawrence County on July 21. Bruno began his journey in Wisconsin and, according to Game and Fish officials, is seeking his own territory and a mate. In this photo, he is near Highway 117 at Smithville.

Bruno the Bear travels through county