The importance of getting the budget process underway was stressed at Monday night’s Lawrence County Quorum Court meeting.

County Judge John Thomison said October would be a busy time with property taxes coming due, and the election would follow that.

Budget Committee Chair Junior Briner agreed saying, “If we wait we’ll be behind the eight ball.”

It was reported that elected officials have already started working on the budget proposals and some have been completed.

“We have to realize sales tax could go down,” Briner said. “Expenses are going to go up with the increase in minimum wage.”

Additional funding received for the Lawrence County Dispatch Center has helped the budget in 2020, and Treasurer Connie Mullen said she received a $10,000 check from the state in turnback funds because the drop off in revenue was not as much as anticipated.

Briner said the budget committee would be meeting soon.

Justices discussed the importance of Issue I for funding for not only county, but municipalities and the state overall.

The Issue would extend the existing one-half percent sales and use tax that provides funding for the four-lane highway system, county roads and city streets. The tax is set to expire June 30, 2023.

“If it fails, the money will come out of the road department,” Thomison said. “This could be a serious issue for services we need for the entire state.”

The court unanimously passed a resolution supporting the passage of Issue I and the continuation of the tax.

Lawrence County Extension Staff Chair Bryce Baldridge shared an update on the Extension Service’s programming in the county over the past year at Monday night’s meeting.

He shared that more than 197 farm visits had been made, as well as 15 in-county demonstrations for local producers. In addition, 68 producers completed pesticide applicator training.

In 4-H programming, he reported 103 members and nine volunteers. Two new clubs were formed over the past year, and two additional clubs are being organized now, one focused on agribusiness and one a virtual club for home-schooled students.

Under the family and consumer sciences umbrella, the Lawrence County Extension Homemakers members made more than 300 masks in response to the COVID-19 pandemic. He reported that there are currently 47 active EHC members in five clubs countywide.

Some community and economic development programs Extension has been involved in include the Agri Expo with 441 in attendance in 2020, the Ralph Joseph Youth Leadership Class, a local citizenship program for high school students, ballot issue education and 2020 Census education.

In other business, justices:

expressed support for route B for I-57 north from Lawrence County to the Missouri state line. The route would take the highway near Williams Baptist Univeristy, then north of Black River Technical College and then toward Corning.

authorized Judge Thomison to pay Lawrence County’s share of the cost to arbitrate an insurance fraud case, where a company collected the county’s payments for pharmaceutical coverage but did not pay the premium. Eight counties are involved in the case, and the cost of arbitration is expected to be between $1,200 and $2,000, with the county set to recoup as much as $60,000.

transferred $23,037.90 from the general fund to the sheriff’s department fund. The funds represented proceeds from the sale of old LCSD vehicles.

transferred $250 from the general fund to the sherriff’s department fund. The money was a reimbursement from the state for a conference that personnel did not end up attending.

passed a grant resolution for a Rural Development Grant in the amount of $20,000 to be used toward the purchase of new vehicles for the LCSD.

adopted a resolution that will allow county employees to carry unused vacation hours from 2020 into 2021. The hours which normally expire at the end of the year, are being allowed to carry over this year only due to employees not taking time off while the county was short-staffed during the response to the coronavirus. 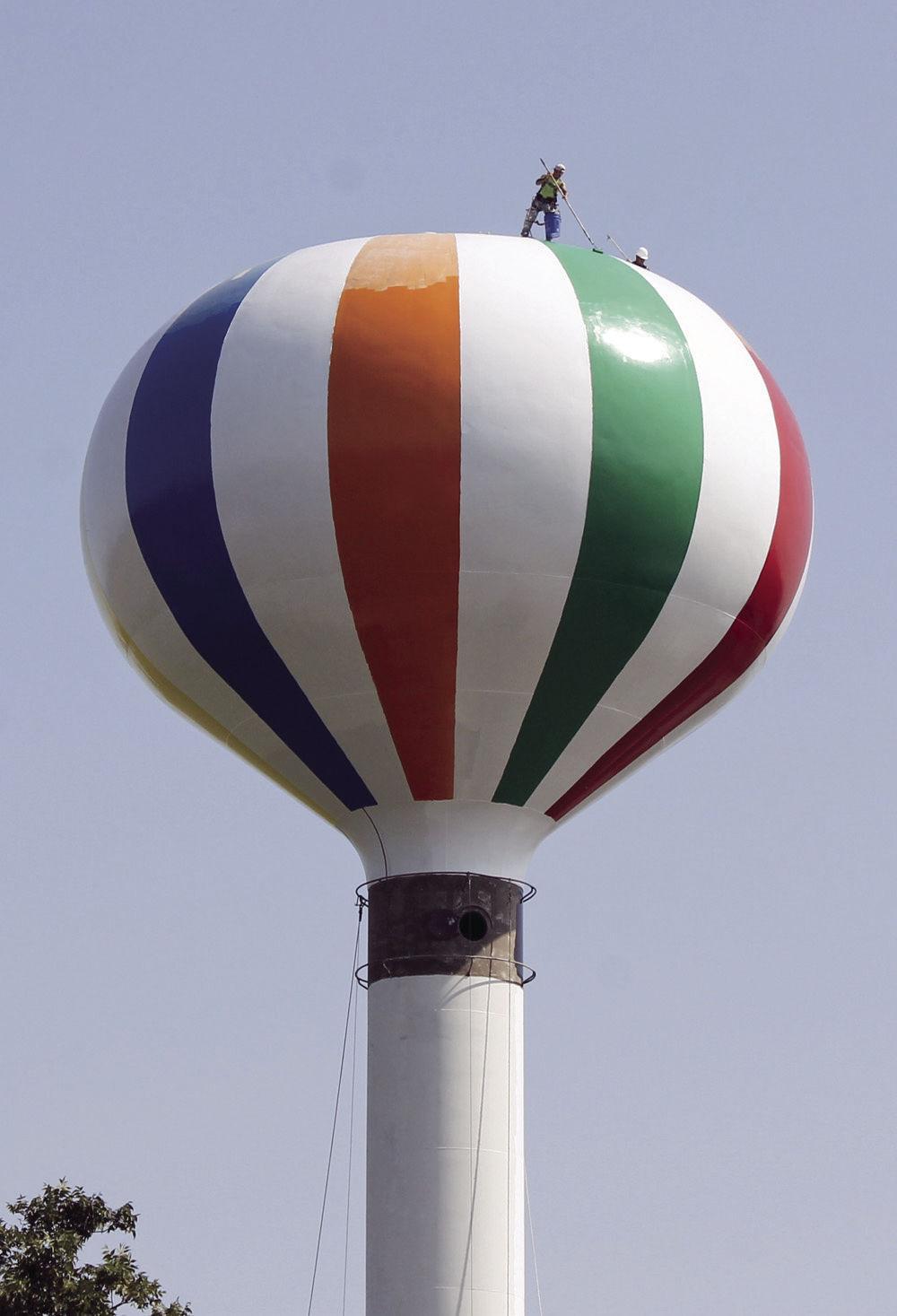 Workers put a new coat of paint on the stripes on the Walnut Ridge water tower last week. The unique design has become a landmark as residents and visitors alike look for the “hot air balloon” over the city as they approach.

Nate Thompson of La Grange, also known as the Arkansas Running Man and Mount Sinai, visited Strawberry on Saturday as part of his effort to spread love and unity throughout towns and cities in Arkansas.

Lindsey Dingman (left) visits with the Arkansas Running Man, Nate Thompson, during his visit to Strawberry.

Nathan “Nate” Thompson is on a mission to spread love and unity throughout the state of Arkansas one community at a time.

On Saturday, that community was Strawberry. After receiving some information about the town from Lindsey Dingman, Thompson, who is also known as the Arkansas Running Man and Mount Sinai, scheduled a run through the community.

“After answering a few questions about the founding of Strawberry and our local government, he came and ran down the main roads in Strawberry,” Dingman said.

An Army veteran, Thompson began his journey in March and he plans to continue until he feels his mission is completed.

Dingman said after he ran the streets of Strawberry carrying a United States flag, she and her mother took him to Momma G’s in Lynn to eat breakfast.

“He met several members of our community, including Randy Story, the Hillcrest English teacher who volunteers at the Wings of Honor Museum in Walnut Ridge,” she said.

Lawrence County and cities within the county could be eligible for thousands of dollars in reimbursement through the Coronavirus Aid, Relief, and Economic Security (CARES) Act if a plan endorsed last week by the Arkansas CARES Act Steering Committee is implemented.

Under the plan, which requires approval by the Arkansas Legislative Council, $75 million will be divided among the state’s 500 municipalities, based on population, and counties will be eligible for another $75 million based on state turnback funding and public safety funding formulas for the counties.

The plan was devised by leaders of the Association of Arkansas Counties and the Arkansas Municipal League.

County Judge John Thomison said Lawrence County will pursue the reimbursement if approved and after the guidelines are distributed.

“It’s a fluid situation,” he said. “We are pursing all avenues.”

He said they are prepared to be able to offer documentation on expenses.

“We’ve been keeping files on what’s been spent and potential allowable expenses,” he said.

Funding will be distributed on a reimbursement basis directly to the cities, towns and counties after their submitted claims are reviewed by the state Department of Finance and Administration. The claims also must be approved by CARES Act Steering Committee and the Legislative Council.

Unclaimed funds will be returned to the Steering Committee for redistribution.

The deadline to register in the Nov. 3 General Election is nearing, and Lawrence County residents are being encouraged to register or update their registration if they have changed addresses since the last election.

Oct. 5 is the deadline to register to vote, and Oct. 30 is the last day to transfer a voter registration for those who have moved.

Lawrence County residents can pick up a voter registration form at the County Clerk’s Office at the Lawrence County Courthouse in Walnut Ridge or download a form from the Secretary of State’s website.

To verify that voter registration is up-to-date, residents can call County Clerk Tina Stowers’ office at 870-886-1111 or look under the voter view link on the Secretary of State’s website at sos.arkansas.gov.

Felix Goodson Library at Williams Baptist University will host a voter registration event on Tuesday, in observance of National Voter Registration Day. All who are qualified to register may do so from 1 p.m. to 8 p.m. that day in the library, which is located near the university entrance.

Thousands of national, state and local organizations and volunteers are participating in National Voter Registration Day 2020.

The Lawrence County Health Unit will host a drive through flu shot clinic next week, Monday through Friday, at 1050 West Free Street in Walnut Ridge.

In addition, COVID-19 testing is available during the event. There will be no out of pocket expense. Those attending are asked to bring their insurance card if available.

Lawrence County continues to see new cases of the coronavirus each week according to information released by the Arkanssas Department of Health.

Over the past week, the county had 50 new cases reported, bringing the cumulative total to 321, up from 271 last Tuesday.

As of Tuesday, there were 48 active cases being reported in Lawrence County, up from 29 the previous week. Recoveries have increased 37 from 231 to 268.

No new deaths have been reported, with the count remaining at 11.

Walnut Ridge School was added to the districts that have announced confirmed cases of the virus.

The Lawrence County School District reported on its Facebook that Walnut Ridge High School had confirmed cases, and that district administrators and school health officials were following the guidelines of contact tracing as set forth by the Arkansas Department of Health.

Due to the positive cases, the senior high football game set for this past Friday against East Poinsett County was canceled, as were the Lady Bobcats’ volleyball matches against Newport that were supposed to be played on Thursday.

The Lady Cats were back in action Monday night, but the football team was already scheduled for an off week this coming Friday, so the next game will be Sept. 25, which is homecoming.