News
Phase one of reopening continues

Salons, barber shops, gyms and other such have been allowed to reopen with stipulations.

For 20-year veteran Jennifer Archer with Studio M in Walnut Ridge, she said the reopening has gone pretty smoothly.

“We have a long waiting list, but people for the most part are being patient,” she said.

She said finding masks and disinfectant spray has been a challenge, as has wearing a mask all day.

In addition, Monday was the first day restaurants could offer dine-in services with limited seating and other safety precautions.

Several restaurants in Lawrence County have decided to keep their dining room closed through phase one of reopening and continue offering service through drive-through or carryout only.

Moni’s Grill in Walnut Ridge is among restaurants that have elected to keep their dining rooms closed for now.

“It’s hard to let some in and have to turn others away,” Monica Long said. She also noted the uncertainty of what changes may come from day to day.

“It is uncertain times,” she said. “We don’t know what’s going to happen next week. We decided to continue operating as we have been for now.”

She said the support of the community is vital.

“It’s working like this,” she said. “It’s not paying all the bills, but it’s working. We thank our loyal customers and appreciate their continued support.”

Some churches met in person for the first time in weeks on Mother’s Day, while others are continuing to conduct their services virtually. Several churches are also opting for outdoor services.

County Judge John Thomison said court proceedings are expected to resume at the end of May.

Decisions from the governor’s task force regarding youth sports are anticipated soon, as well.

As more and more businesses and services reopen, Thomison said it is important for citizens to remember that there are still restrictions in place to help stop the spread of the virus.

Much of the county’s case count continues to be centered around Walnut Ridge Nursing and Rehab. On Monday, State Rep. Fran Cavenaugh reported two additional deaths, bringing that total to six.

There are 30 active cases involving residents, with 17 recoveries. In addition, a total of 28 staff members have tested positive, with 13 of those having recovered.

Cavenaugh expressed her condolences to the residents who have passed away.

“Please continue to keep the residents, families and staff in your prayers,” she said. 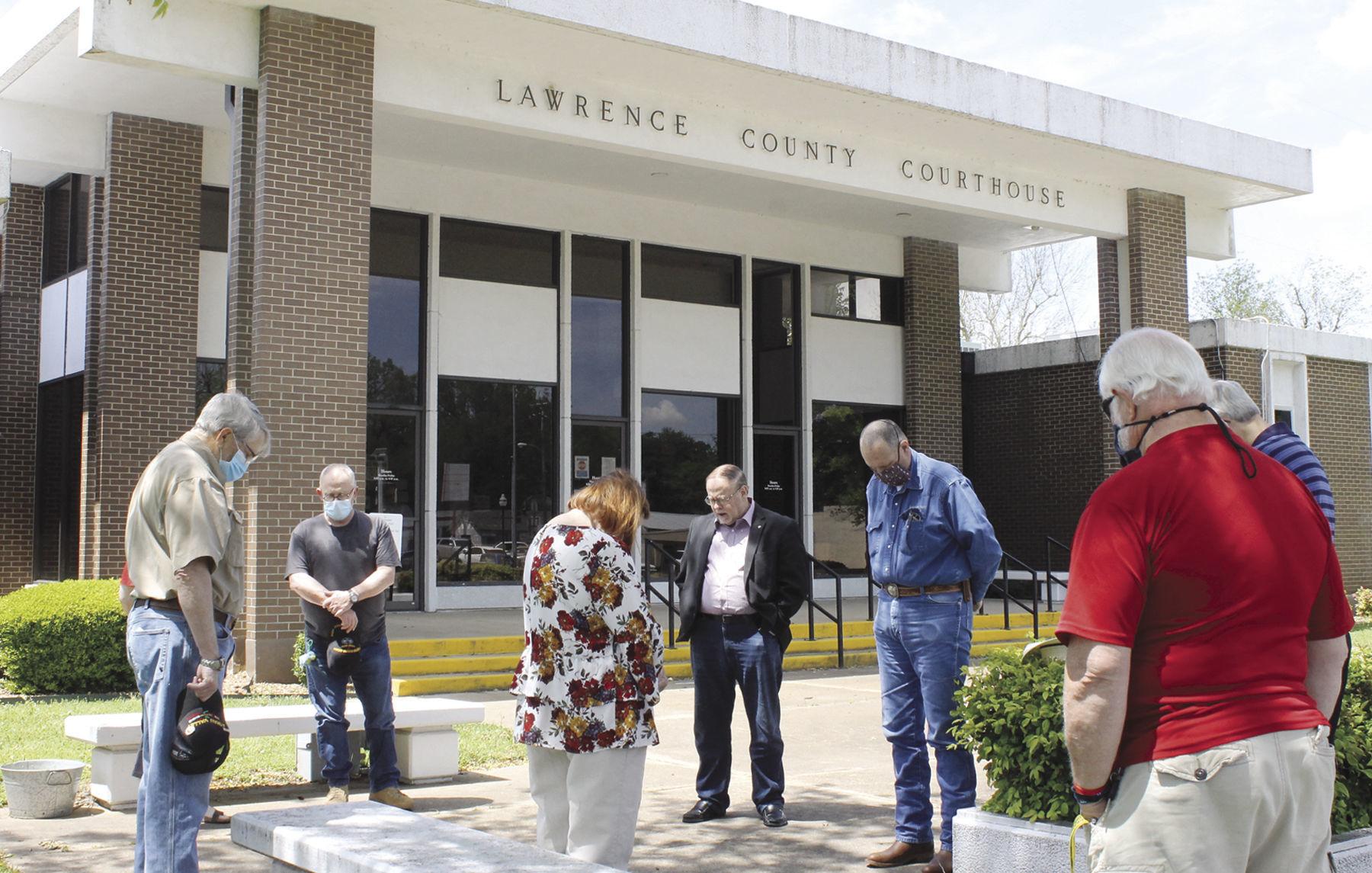 Several gathered at the Lawrence County Courthouse on Thursday at noon for prayer as part of a National Day of Prayer service. Local pastors, county officials and community members were among those in attendance.

A bicyclist heads down the Lawrence County Rail-Trail from the new University Trailhead.

The Lawrence County Rail-Trail is sporting several new features for those who want to get some exercise or simply get outdoors this spring. The walking and bicycling trail is now fully paved, has two new launch points, and a new extension to the Williams Baptist University campus.

Thanks to work completed last fall, the trail is now paved its entire 6.5 mile length from Hoxie to WBU. Workers paved a 1,300-foot stretch just west of Hwy. 67 that had previously been gravel, as well as repaving the crossing over Coon Creek, which had been washed out in a flood.

The construction project also resulted in a three-quarter mile trail extension to the WBU campus.

“Every phase of construction on the rail-trail has made a big improvement, but this latest project has been particularly gratifying,” said Brett Cooper of the county’s rail-trail committee. “Our trail is now completely paved and it is very accessible to walkers and bicyclists across Walnut Ridge, Hoxie and beyond.”

The project was funded largely by a $75,000 grant from the Arkansas Department of Transportation, matched by labor and materials provided by Lawrence County.

“We offer our deepest thanks to County Judge John Thomison and the county road department for making this project possible with a lot of time, effort, materials and county equipment,” Cooper said. “And Junior Briner, our committee chair, did a huge amount of work keeping the project coordinated. They all deserve a great deal of credit.”

The rail-trail is limited to non-motorized traffic, but those who want to drive to the trail can now park at the University Trailhead on the WBU campus or the United Church Waypoint at United Free Will Baptist Church. Both locations provide paved, accessible parking for the rail-trail.

“The new trailhead and waypoint are great additions to the rail-trail,” Cooper said. “We truly appreciate all that United Free Will Baptist has done to make the trail accessible from their church, including a new gazebo with seating. And the University Trailhead makes the trail much more accessible to the Williams campus and the northern part of Walnut Ridge.

The church provides the waypoint through an agreement with the rail-trail committee, which agreed to let the church extend its parking area into the rail-trail right-of-way. In exchange, the church invites trail users to park their vehicles there or stop for a rest at the gazebo.

With the stretch of trail west of Hwy. 67 now paved, warning signs have gone up where the trail crosses the highway. Stop signs warn trail users that cross traffic does not stop on the busy roadway.

“Ideally, we would prefer the trail not cross such a busy road, but the trail follows the old railroad spur, and that’s where it crossed Hwy. 67,” Cooper noted. “An overpass is simply not financially feasible, so we urge all trail users, especially those who have children with them, to exercise due caution before crossing the highway.”

The county and the cities of Walnut Ridge and Hoxie are responsible for maintenance of the rail-trail.

“The two cities do a great job of keeping the trail looking nice, and we thank them,” Cooper said. “Walnut Ridge tends six miles of the trail, and we appreciate Mayor Charles Snapp, in particular, for the time and expense the city puts into weed control, which makes a huge difference.

Cooper said a ribbon cutting is planned for the new additions to the rail-trail.

“We had planned to do that as soon as the weather warmed, but the pandemic forced us to postpone the ribbon cutting,” Cooper said. “In the meantime, we hope the community will get out and enjoy their rail-trail.”

Those who want to keep up with the trail can follow the “Rail-Trail of Lawrence County” page on Facebook.

Gov. Asa Hutchinson has announced a new text alert system with the ability to provide timely COVID-19 alerts and other critical guidance directly from the Arkansas Division Emergency Management to Arkansas residents.

Arkansans can opt-in to the new system today by texting ‘COVID19ARK’ to 67283.

“This is a free service from the Division of Emergency Management and RAVE Mobile Safety that will enable Arkansans to receive COVID-19 alerts and other guidance,” said Governor Hutchinson. “Participation in Smart911 will provide first responders additional information they need to ensure your safety and wellbeing.”

Residents who have opted in for alerts will also receive instructions to sign up for Smart911, a free service that allows individuals and families to provide key context to 9-1-1 call takers and first responders.

Through the Smart911 app or smart911.com, residents can create a Safety Profile that contains critical information including pre-existing conditions and quarantine status.

As Arkansas manages the COVID-19 outbreak and a surge in 9-1-1 calls, the information in these Safety Profiles allows 9-1-1 operators to proactively identify and communicate with those at greatest risk while also providing first responders the context and foresight they need to protect themselves from exposure and arrive on the scene fully informed.

Thomison said 44 county employees have been furloughed, including all road department employees, staff in courthouse offices and administrators in 911 and at the jail.

The furloughs, which are set to be in effect through the end of July, will result in a savings of approximately $132,000.

“That does not total in savings on retirement, sales tax and such,” Thomison said. “So the savings will be more than that.”

He stressed that a furlough is different than a layoff, which is when an employee’s contract is actually severed.

“With a furlough, there is an agreement that the job is there and you will go back,” Thomison said.

He said Aug. 1 is the date the furlough is set to end.

“We feel like with our shortfall we’ve been guaranteed, this is a good first step,” Thomison said.

The county has also ended two truck leases early. While a penalty had to be paid, it resulted in a savings of $40,000.

“Every elected official has cooperated and has skin in the game,” Thomison said. “We are still looking for ways to trim, but these moves are designed to keep us out of trouble.”

At this time, revenue is still coming in good, but Treasurer Connie Mullen said there is a delay in when funds come in, so money received in April was actually collected in February.

“We expect it to be worse next month,” Mullen said.

She said the county also received $19,000 in mineral rights that had not been anticipated.

Justices approved a letter stating the county will continue to pay insurance for the employees.

Thomison said the intention is to leave access to the courthouse restricted until court begins again. The first district court date is set for May 28.

There will be restrictions on how many can enter the courtroom at one time. To accommodate that and still uphold social distancing guidelines, Thomison said a deputy will monitor the entrance to the courthouse to provide entry.

Those going in for a court case will be sent into the courthouse at the appropriate time to prevent gathering in the lobby.

Those who need to conduct business in the courthouse that cannot be done online or over the phone are reminded that they can call the appropriate office to make an appointment.

At this time, the Walnut Ridge revenue office, located in the courthouse, remains closed. The Imboden office is open.

Judge Thomison announced a public meeting on Friday at 10 a.m. regarding a grant application with the Arkansas Economic Development Commission.

Justices passed a motion to deposit reimbursement checks received by the Lawrence County Sheriff’s Department in the general fund and then reappropriate it to the LCSD fund. The checks, totaling $182.74, are reimbursement payments from a conference attended by Sheriff Jeff Yates and Chief Deputy Tony Waldrupe.

Thomison updated justices that a district court office will remain in Lawrence County, but details on how changes will be implemented with the changes in the district court system have not been finalized.

According to the LCSD, deputies were called to 50 Lawrence County Road 2741, near Smithville, on Thursday at approximately 9:50 a.m., where the body of a man, later identified as James Sartorelli, had been discovered. He was pronounced dead at the scene by the coroner.

LCSD detectives and special agents with the Arkansas State Police began a homicide investigation, and the body was sent to the Arkansas Crime Lab for autopsy.

According to the report, several interviews have been conducted and persons of interest have been developed.