The Walnut Ridge Airport Commission discussed current finances and received a preliminary budget for 2022 at its meeting on Monday night.

Airport manager Stacy Hoggard said the bank account is down, but should rebound with recent fuel sales and some other anticipated revenue that has not been recorded.

She noted that the commission has not had to move any money from the CMA account to the operating account despite making several purchases this year including a tractor and bush hog, a lawnmower and a courtesy car.

“All bills are paid,” she said, noting that $15,000 in recent fuels sales was not yet reflected in the financial reports presented.

Hoggard also distributed a preliminary budget for 2022 to commissioners. She said she expects revenue to increase in 2022, but she is being conservative with her budget numbers.

Hoggard said a final budget will be completed prior to the December meeting, which will be held early due to the holiday. A meeting date will be announced as soon as it is set.

Hoggard reported that a check for $1,260.60 had been received from Andrea and Seth Hardage to pay the electric bill and other fees associated with the hangar they had vacated their lease on. Commissioners voted not to pursue the two months’ lost income from the hangar, which has since been leased under a new contract.

Commissioners were informed that the Lear Hangar would remain a community hangar. There had been some interest in a private lease, but the interested party decided against leasing the hangar. Hoggard said the airport will benefit as much, if not more, from the community lease, especially where fuel sales are concerned.

Hoggard reported that the letter of intent has been submitted for a historical grant.

Commission Chair Don Cavenaugh noted that the airport has several pieces of equipment that could be sold if the city has a sale in the near future.

First United Methodist Church in Walnut Ridge is making plans for the centennial celebration of its building, located at Southwest Second and Vine Streets. This postcard shows the church building as it stood from 1922-1966, with open round columns in the front and the single wide staircase.

The original Walnut Ridge Methodist Church was constructed in 1886, sold prior to the new church construction and lost to fire in 1922.

The “new” church under construction in 1921.

The original church interior featured a wrap-around balcony, which was removed during the 1967 renovation. The pews were custom-made, as was the elaborate pressed-tin ceiling and molding ornamentation.

The church building front facade was altered in the 1979 renovation. Encasements were added around the columns and the front staircase was changed.

All historic church buildings have stories to tell.

It has even hosted the Arkansas Methodist Annual Conference, twice: back in 1923 and 1946.

Week in and week out for an entire century now, generations of local Methodists have let their Christian lives of faith and praise unfold within the stalwart masonry walls.

“The church is not a building, of course,” Rev. Perdue said. “But it has buildings and this one has been a truly historical fixture in Walnut Ridge for generations of families. It’s a history of countless joys, tears, prayers and acts of Christ-like love, faith, hope and compassion.”

There’s no steeple or belfry, but the choir loft has long welcomed members to make joyous noises to the Lord. Rear staircases leading to the balcony above and basement below showcase arched doorways, delicately detailed tin crown molding and slender windows of magnificent stained glass tucked along the narrow passageways.

The well-worn wooden pews were custom built for the church, and the framed stained glass display at the back of the sanctuary once adorned the upper choir area, and had languished for decades in an upstairs storage room before being returned to active service in its new location two years ago.

Prior to its construction in 1921, Walnut Ridge Methodists occupied a one-room white frame building that had been erected in 1886 near the corner of East Walnut and Northeast Fourth Streets. At the time the new church was built, it was one of the largest in the state. The cost was $60,000, partially offset by the sale of the old church property, and the remaining mortgage debt was retired in 1941.

A 100-year-old building typically undergoes revisions and upgrades, and the First United Methodist Church is no exception. The spectacular windows gracing the front and sides of the building – reportedly imported from France, the stained glass handwork has a decidedly “old world” quality – have been re-leaded and are now protected from the elements by exterior plate glass panels.

The 1920s-era wiring would have been knob-and-tube, and has long since been replaced by modern electrical conduit and technology.

In addition to the extant rear balcony, the sanctuary was originally flanked by side balconies, which were removed during a 1967 renovation. At that time the front entrance was modified as well, enclosing the round columns and moving the doors outward in line with the new squared-off colonnade to create a larger vestibule area. The long single staircase was also altered into the double side staircase it features today.

A major remodel a dozen years later, in 1979, included renovation of classrooms, the Wesley Room, and installation of a new roof, along with fire escapes and an elevator, to allow greater access for members to the main levels of the structure. The Wesley Room, a separate structure on the rear of the property, was renovated two years ago, as well.

A great hazard to historic structures is fire, and the Methodist Church survived a frightful incident in May of 1996, when a butane gas tank malfunctioned and ignited during preparation for a pancake breakfast fundraiser for the Kiwanis Club. The ensuing blaze destroyed the kitchen and part of the fellowship hall, seriously injured two volunteers, and caused extensive smoke damage to the rest of the building.

The major restoration effort involved installing new electrical wiring, HVAC equipment and ductwork, in addition to cleaning of every window and door on all three floors. The church didn’t reopen until February 1997.

On December 5, the church is inviting everyone who wants to help commemorate the building’s centennial to a Celebration Sunday. Former pastors and members, and members who became pastors, are expected to attend.

The current Arkansas Conference Bishop, the Rev. Gary E. Mueller, will be in attendance to deliver the message. Rev. John Fleming, the Northeast District Superintendent, is also expected to attend. Together, the Bishop and D.S. will preside over Holy Communion to the congregation and guests.

There will also be special musical selections, a slide show and perhaps a few surprises, Rev. Perdue said.

Following the service, the afternoon’s agenda includes a luncheon downstairs that will feature more fellowship and lots more memories.

“So many people have so many memories of this grand old church building,” Rev. Perdue said. “We’d like to invite anyone with any sort of fond recollection to join us for lunch and sharing in celebration.”

As the building enters its second century, First United Methodist Church looks forward to continuing its role as one of Lawrence County’s largest and historic Methodist congregations, with many yet-to-be-told stories to come.

“We had eight participants in confirmation earlier this year, which is impressive for a church our size,” Rev. Perdue said. “And despite all the Covid-related disruptions, interruptions and conveniences, we’ve held services and continue to minister.

“We also have completed various upgrades and projects – and have more planned – to ensure our historic church building will not only still be standing for decades to come, but to keep improving to serve 21st century Methodists,” she said. 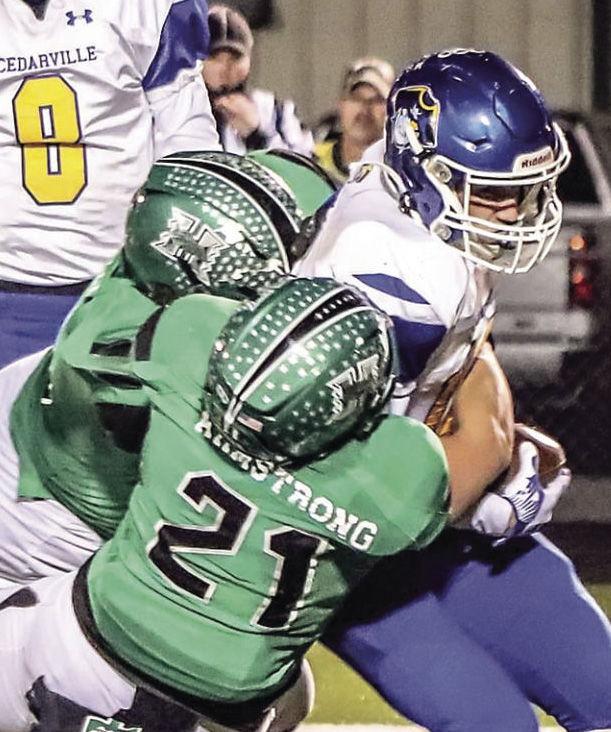 The Delta Regional Authority has named 33 community leaders from all eight DRA states as fellows of the 2022 Delta Leadership Institute (DLI) Executive Academy.

Among those selected is Graycen Bigger of Pocahontas, executive director of the Northeast Arkansas Regional Intermodal Authority. Bigger is also affiliated with Farmers & Merchants Bank.

DLI is an extensive, nine-month executive leadership program that brings together public, private and nonprofit sector leaders from the Mississippi River Delta and Alabama Black Belt.

The DLI Executive Academy empowers fellows with the tools, experiences and networks needed to address local and regional challenges. Sessions led by local, regional and national experts cover policy areas such as infrastructure and transportation, small business and entrepreneurship, workforce development, public health and other sectors necessary to facilitate economic growth in the region. As a result, DLI fellows graduate with improved decision-making skills, policy development know-how, strengthened leadership capacity and a mutual understanding of regional, state and local cultures and issues.

Since 2005, the DLI Executive Academy has provided leadership development to more than 600 community leaders. After graduation, DLI fellows will become members of the Delta Leadership Network, which provides peer-to-peer engagement opportunities for continued leadership development, information sharing and collaboration with other leaders dedicated to the future of the Delta region.