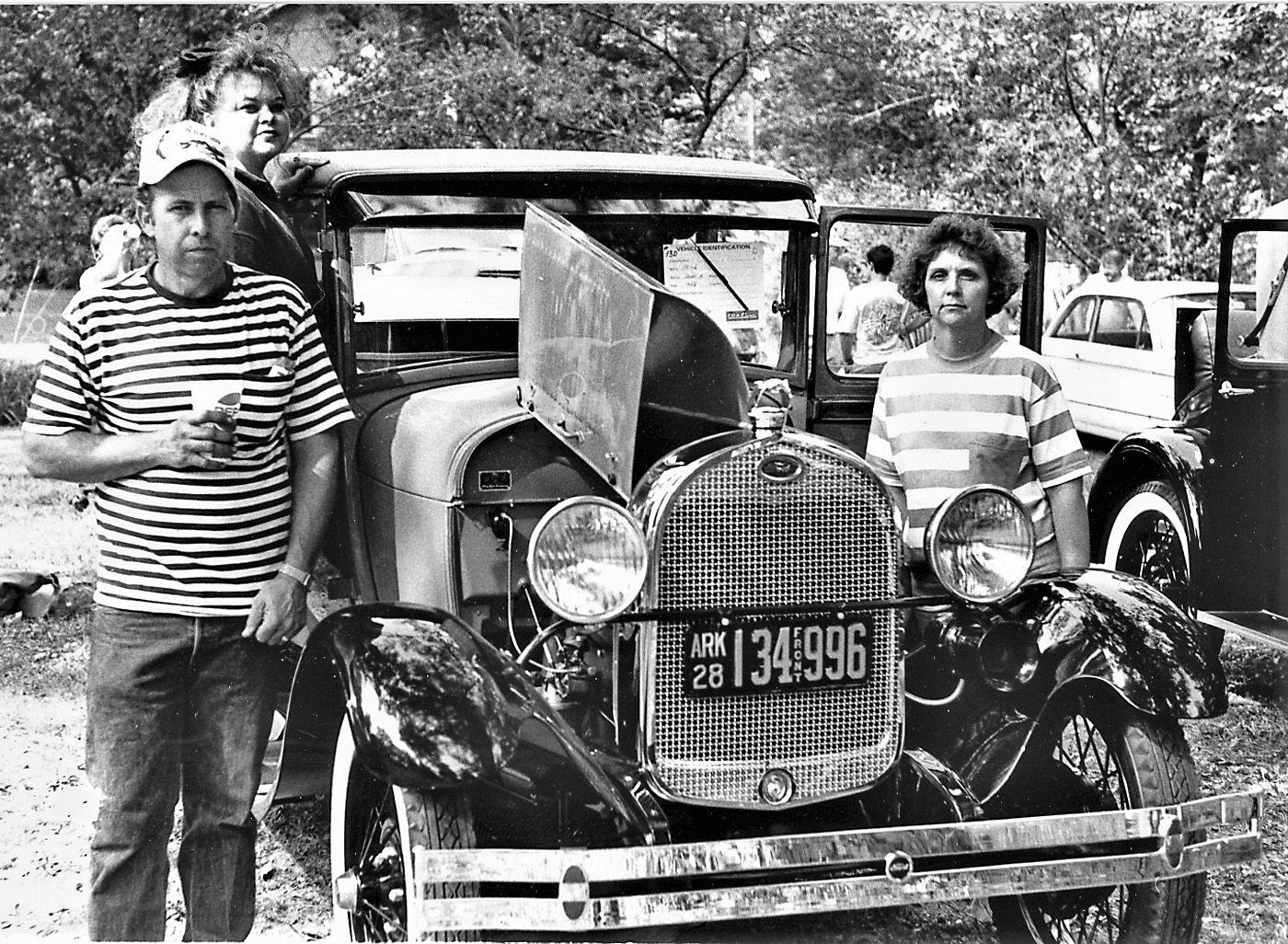 Johnny Dail (left) of Ravenden, his daughter, Misty, and his wife, Joan, (right) show a 1928 Ford Special Model A automobile at the 1991 Lawrence County Fair Auto Show. The car earned Johnny a first place win in the 1928-1937 division. This car also won the People’s Choice Award at the Cave City Watermelon Festival that same year. (Pictures of the Past is a cooperative effort of The Times Dispatch and the Lawrence County Historical Society. Readers are encouraged to submit historic photos.)

During a Chamber of Commerce quarterly meeting on Thursday, the Lawrence County Tourism Committee unveiled plans for two attractions along Rock and Roll Highway 67, including a sculpture to memorialize the Beatles’ September 1964 visit to the Walnut Ridge Airport. The sculpture is a life-size replica of the Abbey Road album cover. The group also announced plans for a guitar walk, to be located along Highway 67 in downtown Walnut Ridge. This project will focus on the rock and roll stars, such as Elvis Presley, Jerry Lee Lewis, Johnny Cash, Roy Orbison and Fats Domino, who played at clubs along Highway 67 in the 1950s.

Payton Poole ran for four touchdowns and passed for two more to lead the Walnut Ridge Bobcats to a 45-26 victory over Salem on Friday night at Salem. He finished with 20 completions on 30 pass attempts, for 249 yards and two touchdowns. He rushed for 74 yards and four touchdowns on 12 carries. Walnut Ridge improved to 3-1 in 2A-3 conference play and 4-1 overall.

Over 300 people attended the second annual Wings of Honor ceremony on Saturday to recognize veterans and civilians who have been affiliated with the Walnut Ridge air base. Among those honored were: Chuck Ledbetter of Walnut Ridge, pilot instructor during World War II; Larry Sloan of Walnut Ridge, part owner of a bus service from the base to Walnut Ridge; Dr. Ralph Poindexter of Richardson, Texas, and formerly of Walnut Ridge, for his service as one of the bus drivers; Mary Rainwater and Dorothy Willmuth, both of Walnut Ridge, for the contribution of papers, records, photos and historical facts from when they were employed at the base.

The Lawrence County Sheriff’s Office reported calls from all areas of the county reporting they had felt tremors from an earthquake that registered 4.6 on the Richter scale.

Catherine Brown, daughter of Jerry Brown of Walnut Ridge and Peggy McDaniel of Bono, was crowned as queen at the HHS homecoming ceremony on Friday night.

Warren and Melinda Williams of Smithville have announced the birth of a daughter, named Katie Frances, who was born Sept. 25 in Pocahontas.

Diane Hawk has been chosen as homecoming queen to reign over the 1980 Bobcat Homecoming, which will be Oct. 10. Other members of royalty include: Chlo Bobrowski, maid of honor; Sherry Brady, senior maid; Laura Felts, junior maid; Martha Wilson, sophomore maid; and Sloane Gibson, freshman maid.

J.H. Myers of Black Rock was elected vice chairman of the Board of Trustees of the State Tuberculosis Sanatorium at a meeting in Little Rock.

The 41-man roster of the University of Mississippi freshman football squad, as released last weekend, lists Dennis Brown of Walnut Ridge as a candidate for the end position.

After gaining a 7-0 lead in the second quarter, the Walnut Ridge Bobcats had a punt blocked in the fourth quarter and the Newport Greyhounds recovered on the seven and pushed across, tying the game at 7-7 at Newport, last Friday night. The Bobcats capitalized on a fumble in the second period when guard Donny Linn recovered on the Newport 43. Mac Justus pitched to Jackie Park, who went 25 yards and then passed for 15 yards and the touchdown. Richard Taylor ran the extra point.

Mary Jane Jansen, who is attending William Wood College in Fulton, Mo., spent the weekend with her parents, Mr. and Mrs. Pat Jansen.

Cadet Milton Hatcher has been promoted to acting squadron leader at Columbia Military Academy, Columbia, Tenn. Cadet Hatcher, son of Mr. and Mrs. Wright Hatcher, is a l2th year student at the Academy.

A “Draft Choate for Mayor” movement was initiated in Walnut Ridge this week, and petitions are being circulated to place the name of R.S. Choate on the ballot as a candidate for mayor of Walnut Ridge. Backers of the movement said a formal announcement would be made next week.

Albert V. (Uncle Al) Smith, 90, died Monday night at the home of his son, W.G. Smith, on Route 2, Imboden. A pioneer Lawrence County farmer, Mr. Smith had a pleasing personality and was widely known and respected. His wife, the former Annie Pickett, died three years ago.

A wonderful tribute was paid Murrell Moore, fellow member of the OPA Board and price panel committee, by the Chamber of Commerce at the noon luncheon Tuesday. The dining room at the Hotel Lawrence was crowded to capacity for a program designated as “Murrell Moore Day.”

Master Sergeant Joe M. Pyland was discharged from the army on Sept. 18, and on the following day re-enlisted and was granted a 35-day furlough. The sergeant, Mrs. Pyland and their son, Joe M. Jr., left Black Rock Oct. 2 for Camp Atterbury, Ind., where he will be stationed. Mrs. Pyland is a nurse in Wakeland General Hospital in Atterbury.

Sheriff M.C. McLeod has accepted appointment to direct the 24th annual membership drive for the American Red Cross in Lawrence County and will be assisted by Paul Morgan.

The Lawrence County Draft Board met Sunday and elected C.W. Webb of Portia as chairman, J.J. Sharum of Walnut Ridge as secretary and Pat Chaney of Imboden as clerk.

At a tent meeting held by the church here a week ago there were 25 candidates for baptism. The fine new church has not been completed, so it was necessary to conduct the ceremony in Black River at Black Rock, a distance of nine miles. W.C. Burel took the matter up with President Bush of the Iron Mountain Railroad and secured a special train from Walnut Ridge via Hoxie to Black Rock for $150. The train left at 2 p.m. and returned at 6 p.m. Five hundred people went on the excursion. Two thousand people attended the baptism.

(Note – The editor of the Walnut Ridge newspaper of long ago apparently thought there was only one church, because he makes no mention of any denomination.)

As we mark National Fire Prevention Week, designated as Oct. 4-10, it is a good time to be both thankful for the local fire departments that work tirelessly to keep our communities safe, and mindful of the work that we as individuals can do to help prevent fires and protect our families, as well.

According to a survey by the American Red Cross, most of us are underprepared for a fire in our home. The Northeast Arkansas chapter urges residents first and foremost to test their smoke alarms and practice their escape plan.

Since February, the Northeast Arkansas chapter has responded to 220 home fires to help 1,187 people with urgent needs like emergency lodging, financial assistance and recovery planning.

Having had good family friends lose their home to a fire this past week, I know how important this immediate assistance provided by the Red Cross is, not to mention how devastating it is to be the victim of a home fire.

The American Red Cross offers the following tips to help protect your family:

Place smoke alarms on each level of your home, including inside and outside bedrooms and sleeping areas.

Change the batteries at least once a year, if your model requires it.

Practice your escape plan until everyone can get out in less than two minutes.

Include at least two ways to exit every room in your home.

Select a meeting spot at a safe distance away from your home, such as your neighbor’s home or landmark like a specific tree in your front yard, where everyone knows to meet.

Teach children what a smoke alarm sounds like. Talk about fire safety and what to do in an emergency.

Several of Lawrence County’s fire departments are also certified through Firewise USA, a program designed to help communities prevent the spread of wildfires to homes.

Homeowners are reminded that open space between wildlands and homes is the best defense, and Firewise USA says we should think of our yard as the primary defense against wildfire.

The area up to 300 feet from homes should contain lean, clean, and green vegetation of all kinds – this includes landscaping, grass, trees, and shrubbery. Homeowners primary focus should be directed to the Immediate Zone (0-5 feet from the home). Keep grass mowed short and provide water, making it very resistant to fire embers.

Trim trees so limbs do not touch the roof, windows, or deck areas; also work to keep limbs trimmed at least six feet up from the ground so that a small surface fire is not transferred to treetops.

Be mindful of burn bans and high fire weather.

A final tip in case we do have to call on our fire departments, is to make sure your house is numbered correctly with large reflective numbers to help those responding to provide assistance as quickly as possible.

We can all do our part to prevent fires, protect our families and help those who provide vital assistance when it is needed the most.