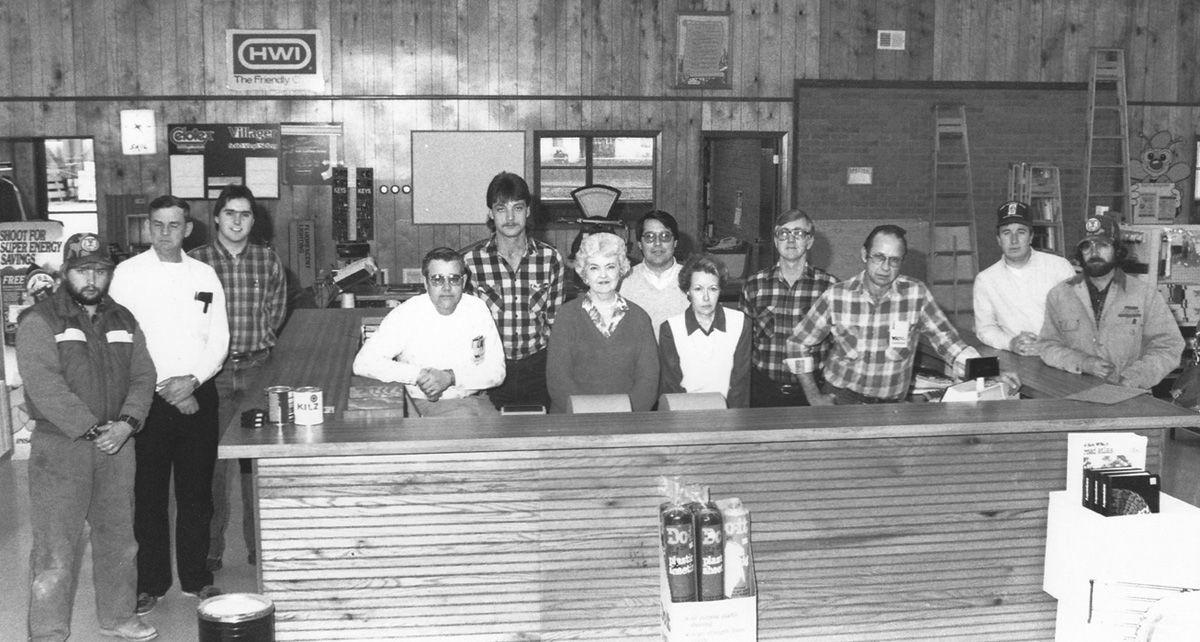 In 1987, Barton’s purchased their current location in Walnut Ridge from Marlin and Alvin Wilcoxson to relocate, consolidate and build a more modern facility. The location had been the home of the old WalRidge Motel, which was torn down to make way for construction. The foundation of the motel was used as a base for the current lean-to shed near what is now the walking trail. In March of 1988, Barton’s held a grand opening at their new location. Employees pictured are (from left) Michael Bolding, Charles Liscomb, Tom Rainwater, Marvin “Bud” Burnside, Donald Prater, Lucille Brand, Ronnie Pierce, Alice Brand, Curt Huckaby, Junior Rutherford, Wes Bridges and Leonard Hardin. (Pictures of the Past is a cooperative effort of The Times Dispatch and the Lawrence County Historical Society. Readers are encouraged to submit historic photos.)

Elementary students in school districts throughout the county joined forces with the Lawrence County Circle of Friends during the month of March to raise $4,779.01 for Arkansas Children’s Hospital with a Hoops in the Halls fundraiser. Michealle Wooten’s fifth-grade class at Hillcrest Elementary was rewarded with a trip to the movies for raising the most money of any class in the county.

Dalesha Johnson, a sophomore at Black Rock High School, was selected by a faculty panel to attend the Hugh O’Brian Youth Leadership seminar held recently in Bentonville. The program is designed to bring together sophomore students from throughout the state to meet and interact with leaders from the areas of business, technology, education, government, arts and science.

Two eating establishments have recently opened in Imboden. Owners Keith and Carrie Wilson opened Pig-N-Out BBQ at the intersection of Highways 63 and 62. Gary and Karen Crocker opened a Subway franchise on Highway 63 South.

The Clover Bend Extension Homemakers’ Club toured the Hemingway-Pfeiffer Museum and Education Center in Piggott on March 20. Wanda Spargo, Marilyn Goodwin and Wilma Christopher visited the Pfeiffer-James Home, which is restored to the early 1930s era when Ernest Hemingway was a frequent visitor.

The Sloan Center for Science and Professional Studies was officially dedicated Friday on the campus of Williams Baptist College. The $1.75 million facility is named for longtime WBC supporter Larry Sloan.

Brooke Howard and Windy Bilbrey, students of Christie McNiell and Edgar Hall’s Studio, were both on dance teams that placed first in Showstoppers Regional Dance Contest in Memphis. Windy also did a solo tap to “Singing in the Rain” and placed second in her division.

Work is underway at the intersection of Highway 25 and Cemetery Road where Arkansas Convalescent Centers, Inc. will locate a 108-bed nursing home. Clark General Contractors will complete the home by Dec. 31. The land was annexed into the city recently at a City Council meeting.

Thomas L. Hilburn is now associated with Ponder & Lingo, attorneys, and will be practicing law with the firm in offices in the Bridges building. Mr. Hilburn graduated from the University of Arkansas School of Law in January.

The State Parks, Recreation and Travel Commission met Saturday and approved the takeover of the administration of the Powhatan Courthouse and adjacent site upon completion of restoration.

Wm. C. Perrin, who suffered a stroke while working at his family cemetery on March 19, and who lay exposed to sub-freezing temperatures until found late the next night, died last Saturday morning in a Batesville hospital. He lived at Saffell.

Hoxie Postmaster J.N. Cooper said today he has been advised by the office of Postmaster General Authur E. Summerfield that the Post Office Department is now asking for bids to build and lease to the Department the new post office for Hoxie.

The Times Dispatch learned yesterday that Dr. Wayne Glenn of Little Rock plans to locate in Walnut Ridge for the practice of medicine this summer.

James W. Slayden, long a prominent citizen of this county and a member of a distinguished family, died at 5:30 last Sunday morning in the Newport Hospital. He was 64.

William Tate, aged about 60, of Old Walnut Ridge, is a patient at the Baptist Hospital in Memphis, where he was taken last week after being badly hurt in an accident at Old Walnut Ridge.

Bryan Fields of Denton, member of the Lynn 4-H Club, won sweepstakes honors at the Mid-South Livestock Show in Memphis last Friday with his 842-pound Hereford. It gave the county two sweepstakes winners in a row. Charles Moore of Black Rock won the sweepstakes at the showing last year.

I met Anthony Pinkston on the first day of school of our ninth-grade year. It was my first year at Walnut Ridge after transferring from Delaplaine. Being a new student in a “big” school (bigger than Delaplaine, anyway), I was a little overwhelmed at times.

The final class period of the day was in the gym. After we were dismissed, I was just milling around, not sure what to do next, when this guy I didn’t know came up to me.

“Uhh, yeah, I’m doing okay,” I answered, wondering who this guy was. Was I supposed to know him? It didn’t matter, though. He seemed like a nice guy and was easy to talk to.

We soon discovered that we shared an interest in sports, especially pro football. His favorite team was the Tampa Bay Buccaneers. At that time, the Buccaneers had not won a game in franchise history. I wondered why, out of all the teams in the NFL, he chose Tampa Bay to root for.

Now, looking back, I can understand. Anthony seemed to have kindliness towards the underdogs, the outcasts.

He was always reaching out to those students who seemed to be unsure of where they fit in. He was the one who would approach these individuals, whether it was in the cafeteria or student center, and let them know they were welcome to join our group. Some responded, some didn’t, but Anthony always gave them the opportunity.

Maybe that’s why he came up to me that day in the gym. Maybe he saw me and thought, “Hey, that guy looks lost. He needs some help.” Whatever the reason, I’ll always be grateful he did.

You don’t replace friends like Anthony. I’m sure the sense of loss will hit again once football season rolls around. My favorite team for 40-plus years, the Oakland Raiders, doesn’t technically exist anymore, and I don’t feel any allegiance to the Las Vegas Raiders, so I guess I’ll have to find a new team. Something tells me I’m going to be pulling for the Buccaneers this year.