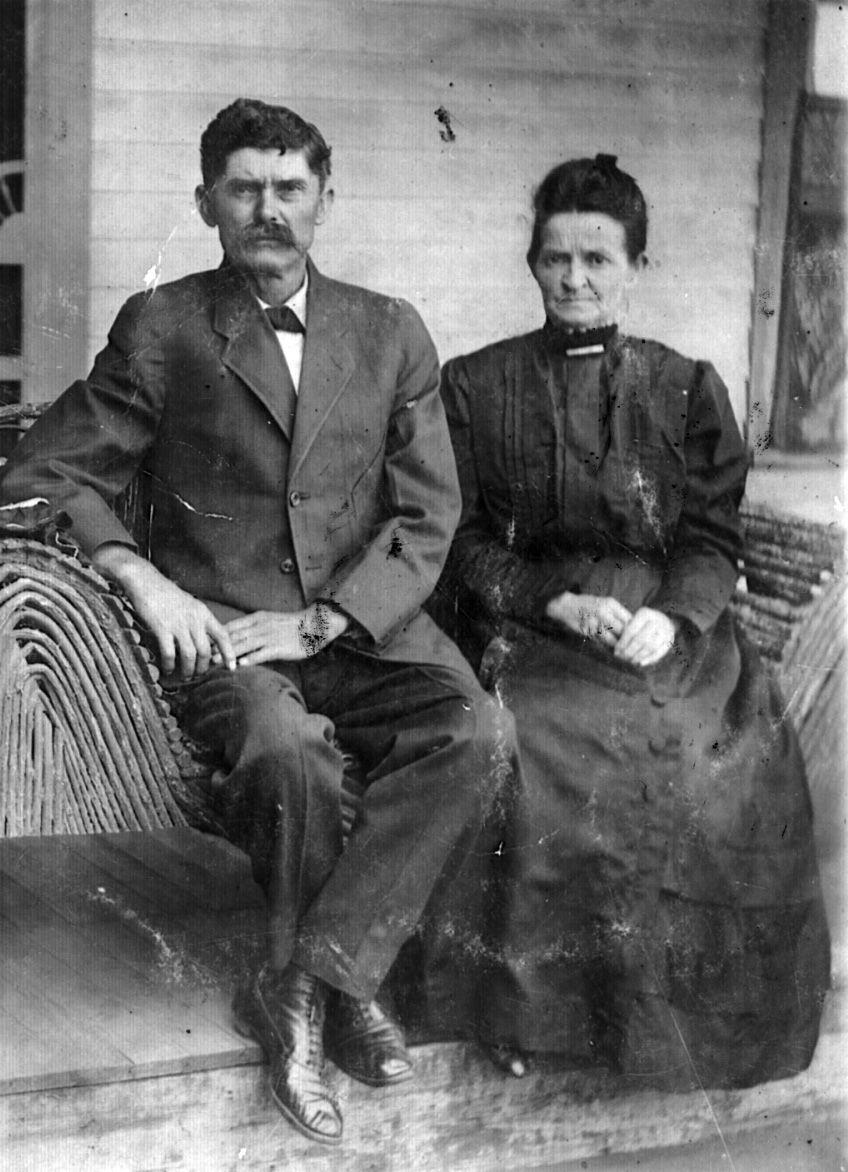 Newton and Josie Wheat Stansbury, who lived in the Black Rock and Powhatan area are shown in this photo shared by Janet Cassidy. Cassidy said she was told Josie never wore anything but black dresses. “She was the sister to my great-grandmother, Susie Wheat, who married William McCarroll,” Cassidy wrote. “Their father is the oldest Confederate soldier in the Powhatan Cemetery, William Billy Wheat.” (Pictures of the Past is a cooperative effort of The Times Dispatch and the Lawrence County Historical Society. Readers are encouraged to submit historic photos.)

The Walnut Ridge City Council hosted a celebration on Aug. 31 in honor of the city’s firemen and volunteer firemen’s success in getting Walnut Ridge’s ISO rating lowered from a Class V to a Class III. Mayor Michelle Rogers thanked the firemen, City Water Works and the 911 Communications Center for their efforts in achieving the lower rating, which will bring lower insurance premiums to businesses, industries and individuals, as well as making the city safer when fires occur.

After an excessively dry and humid summer, recent rains have disrupted harvest of the 120,000 acres of rice planted in Lawrence County. According to Lawrence County Extension Agent Herb Ginn, roughly 40 percent of rice has been harvested this year. “Yields have not been exceptional this year due to the summer heat and dry spell,” said Ginn. “The heat really affected the crop and at some times it was just too hot.”

Hoxie Mayor Paul Hendrix took the oath of office from Municipal Judge Larry Hayes at the Lawrence County Courthouse on Friday. Hendrix will fill the unexpired term of former Mayor Charles Liscomb that expires Dec. 31, 2002. Hendrix was named interim mayor this past spring after Liscomb resigned due to health reasons.

Alan and Paula Haskins of Walnut Ridge have announced the birth of a daughter, born Aug. 26 at St. Bernards in Jonesboro. The baby weighed nine pounds, seven ounces, and has been named Baylee Mae Haskins. She has a brother, Corey Pierce, who is 12.

Jessica Harris of Walnut Ridge has been awarded a $500 Weber McFarland Scholarship to attend a floral school of her choice. Harris is a graduate of Hoxie High School and is employed by Flower Basket in Walnut Ridge.

Ruelene Foley, Arkansas Education Association District XIII board member, recently attended a two-day orientation meeting in Russellville. She was recently elected to the board.

Danny Coker resigned recently from the Clover Bend School to become commercial manager of radio station KRLW. Coker taught school at Clover Bend for three years and has been associated with the radio station for several years.

The first bale of cotton from the 1970 crop was received Monday, August 31, at the Lovelady Gin at Minturn. The cotton was grown by E.B. Parks on the J.L. Mackey farm, east of Alicia.

Enrollment of the Hoxie School as of Monday was a record 893, according to the officials of the school.

Captain James E. Hart has received the Army Commendation Medal for service as secretary-treasurer of the Quarry Heights Officers Open Mess in the Canal Zone. He plans to pursue a career in hotel-restaurant management.

Charles C. Snapp and Lucy (Mrs. C.W.) Nickels, both of Walnut Ridge, have been named as chairman and co-chairman for the Dollars for Democrats for 1960. They will have a quota of $1,195 for Lawrence County.

Jim Hall has been elected president of the Kiwanis Club of Walnut Ridge.

Margaret Snapp and Judy Arnold will leave Monday for Hendrix College, Conway, where both are returning for their junior year.

Robert H. Smith Jr., son of Mr. and Mrs. R.H. Smith of this city, is at home after completing requirements for a bachelor of arts degree at the University of Arkansas. He will return to school this fall to complete a degree in business administration. Young Smith has been commissioned as an officer in the United States Army Reserve and will report to Fort Lee, Va., next January.

Two youths have been stricken with polio in the western district of Lawrence County and a third child is believed to have contracted the disease.

It was learned Wednesday night that three men had planned to rob the Citizens Bank of Smithville and that the alertness of citizens there had frightened the trio. Sheriff W.E. Archer had queried Michigan authorities on the license tags and later was notified that the car had been stolen. Officers near Poplar Bluff arrested the men. The phone lines had been cut preparatory to robbing the bank.

Howard Archer, veteran member of the Arkansas State Police, has resigned and has been succeeded by Charles Logan, recently discharged from the army after four-and-one-half years service.

Mayor A.S. Irby, R.B. Warner and Z.M. McCarroll were business visitors in Little Rock yesterday, going to that city to confer with trustees of the bondholders of securities of the City Water Works regarding use of funds for assistance to the proposed shoe factory project.

S-Sgt. Glenwood Vance, son of Mr. and Mrs. Boss B. Vance of Sedgwick, who served 15 months in the European theater of operations, has arrived at the San Antonio District, AAF Personnel Distribution Command.

Mrs. Catherine Ring Doan of Walnut Ridge was named Queen of Jonesboro’s First Annual Rodeo Sunday afternoon and was presented with a horse, saddle, and blanket by Major T.E. Robertson, owner of the rodeo. Mrs. Doan was chosen for her beauty, horsemanship and pleasing personality by the rodeo judges. A total of 35 girls from Eastern Arkansas towns participated in the queen’s contest.

Opinion
Submissions are vital to newspaper
09.09.20

The Times Dispatch has always been blessed with many contributing writers, guest writers and news sources who submit information to help keep our readers informed.

During these past few months, that network has become even more vital as gathering news is not always easy during a pandemic.

We have always invited submissions, which we feature in the paper as much as we can, but during the COVID-19 crisis, submissions have become even more important to our news production process.

I wanted to both say thank you to those who have faithfully written correspondence, submitted guest features and shared news and photos from local schools, churches and other organizations, and also give some guidance for those who might not know how to go about submitting something to the paper for consideration.

While we do receive some news through the mail, the bulk of our submissions are submitted via email and can be sent to editor@thetd.com. The following are some general guidelines:

When submitting an article, remember that people want to know who, what, when, where, why and how. Always include a phone number and contact name for a reporter to call if more information is needed.

For organizations that submit news regularly, it is important to remember that the newspaper has limited space. Pick the things that are the most important to submit.

It is preferable to receive emailed articles as a Word document or within the text of the e-mail. Often, we cannot read attachments of document files created with other programs.

Many times when TD photographers are not available, a photo from someone involved in an activity can be published in the paper.

Remember to take action photos of a few people instead of trying to get a group picture of everyone involved.

Also, make sure to get close to the subject(s) of the photograph. Often if the photo is taken too far away, it will not be useable.

Photos can also be e-mailed as a jpeg to editor@thetd.com. Photos need to be submitted in as high quality as possible. Generally, if a submitted photo is not run it is because of quality.

In addition to news submissions, we welcome our readers to share historic photos for our Pictures of the Past feature, as well as submit letters to the editor.

Anyone with questions about submissions is encouraged to contact me at 870-886-2464 or editor@thetd.com. It is only with help from each and every one who submits news, photos and information to us that we are able to keep spreading the news about Lawrence County.