If you need to purchase a subscription.
You have permission to edit this article.
Edit
News
Features
Opinion
Sports
Obituaries
Share This
1 of 3 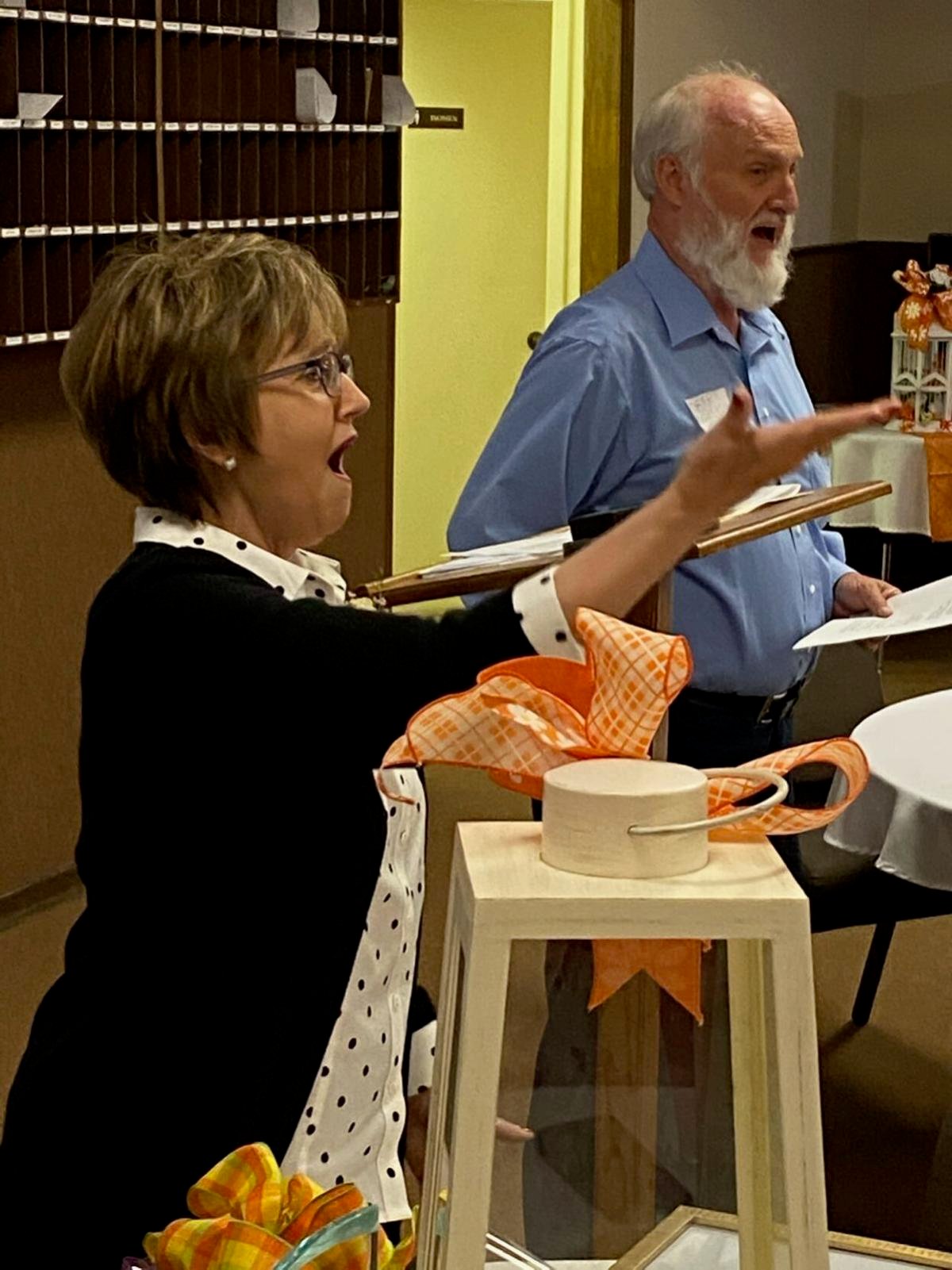 Darlene Moore directs attendees at a celebration honoring her in the singing of “God Bless America.” Dr. Robert Engelken (background) served as emcee for the program. 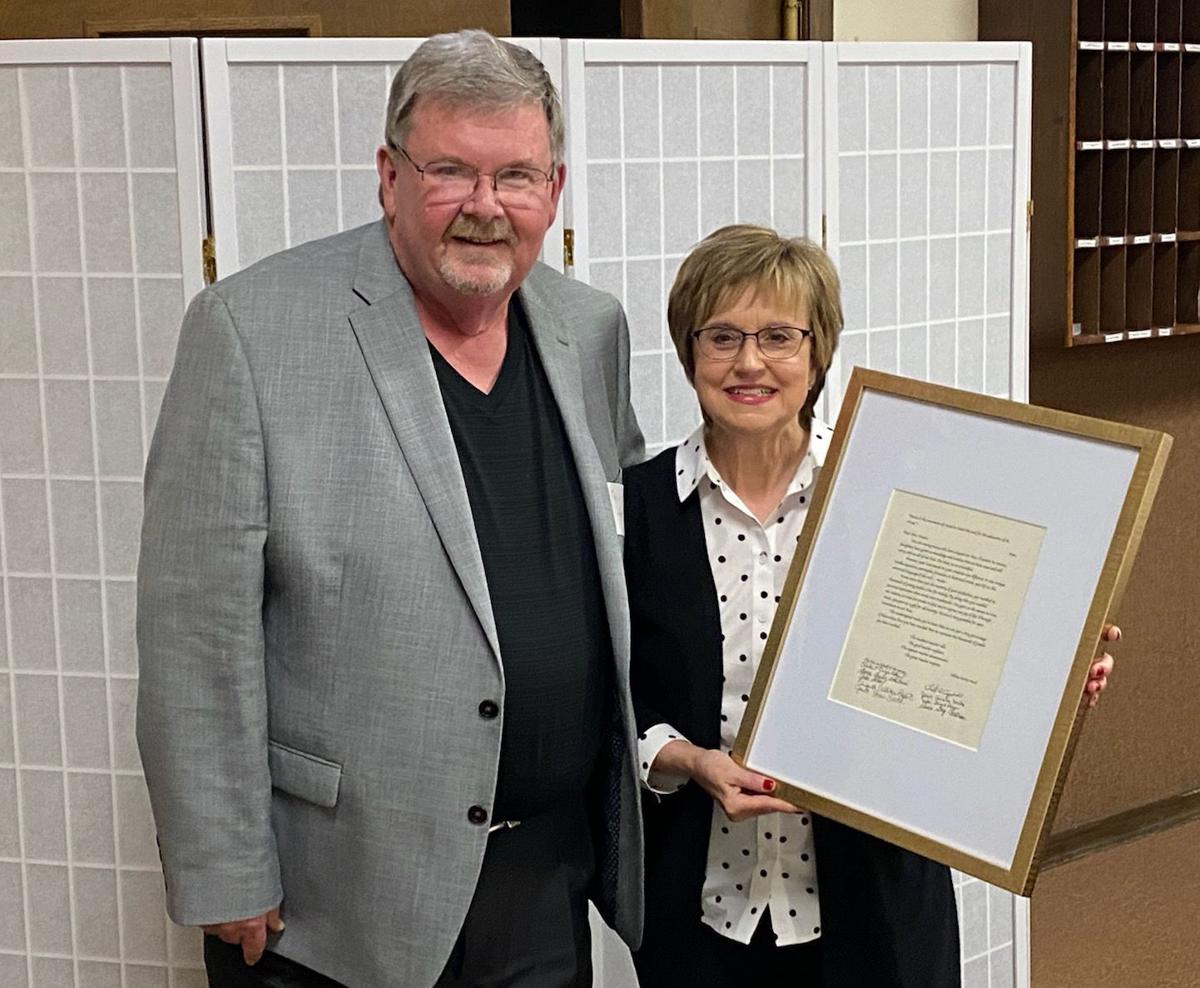 Rev. Tim Campbell presents Darlene Moore with a thank you letter signed by members of the celebration planning committee. 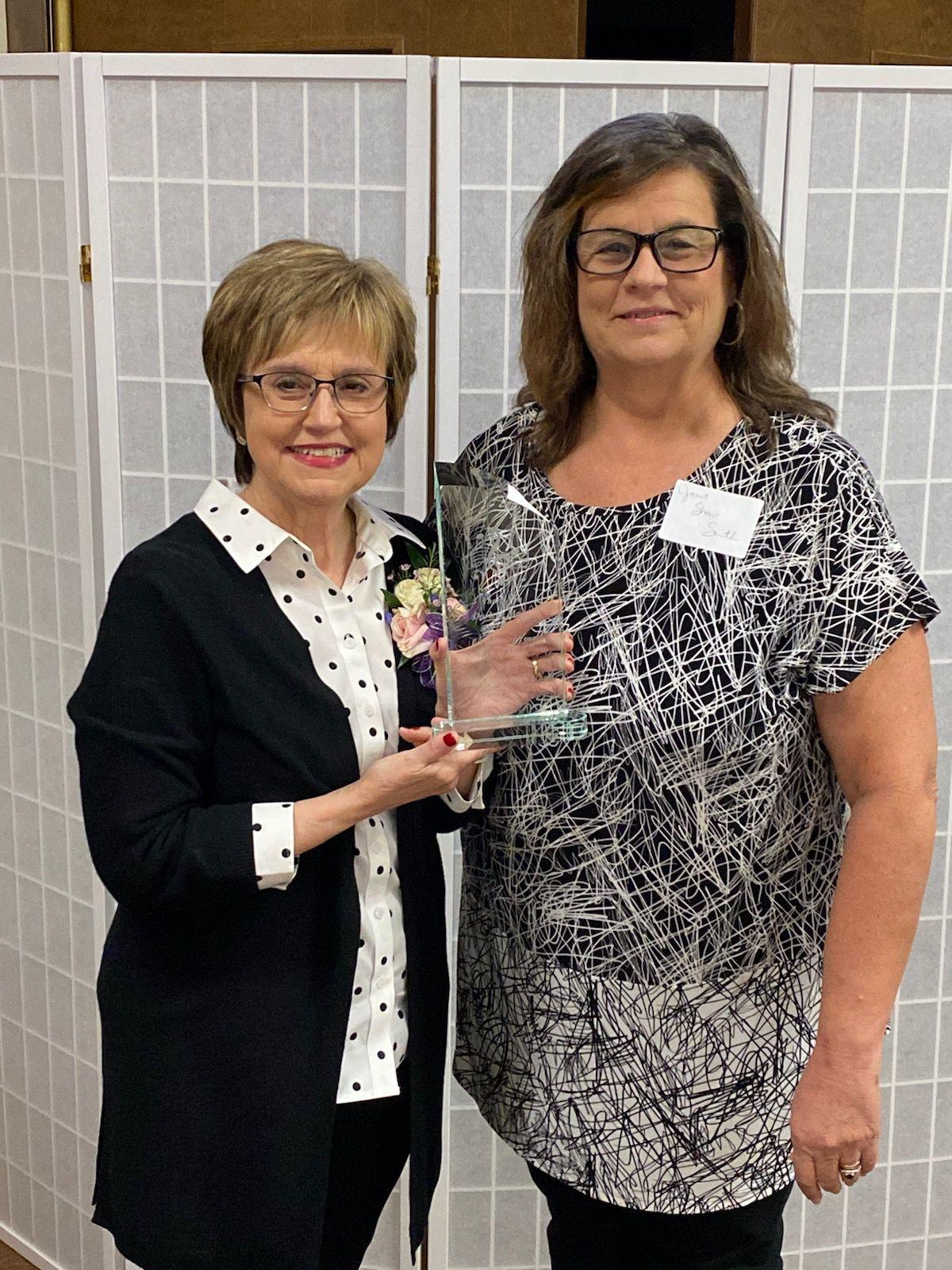 Janet Shaw Smith (right) presents a crystal thank you plaque to Darlene Moore on behalf of the event committee.

Darlene Moore directs attendees at a celebration honoring her in the singing of “God Bless America.” Dr. Robert Engelken (background) served as emcee for the program.

Rev. Tim Campbell presents Darlene Moore with a thank you letter signed by members of the celebration planning committee.

Janet Shaw Smith (right) presents a crystal thank you plaque to Darlene Moore on behalf of the event committee.

A celebration held Saturday evening marked the retirement of Darlene Flippo Moore from Walnut Ridge High School, where she taught and directed choral music for 47 years. She retired in the summer of 2020.

Many former students, friends and family members gathered for the event at the fellowship hall of First Free Will Baptist Church in Walnut Ridge.

The event began at 5 p.m., when guests could greet Darlene and her husband, Tom Moore, view a large table of memorabilia and enjoy refreshments at tables decorated in the school colors of orange and white.

A program began at 6:30 p.m., when Darlene and Tom were escorted to the front as attendees stood in their honor. A recording of “Like a Mighty Eagle,” a favorite number of former WRHS male choruses, played in the background.

Dr. Robert Engelken of Jonesboro, who served as emcee, said the purpose of the event was to “commemorate and celebrate the life and career of Darlene Flippo Moore.”

Several individuals made presentations to Darlene during the program including: Janet Shaw Smith, a crystal freestanding plaque; Engelken, a thank-you poem that he had written, and Rev. Timothy Campbell, a framed appreciation letter from the committee that planned the event.

Near the end of the program, Moore expressed her gratitude for the event and for being able to have a career that combined her love of music and students. She ended with a piano and vocal performance of “For Good” from the Broadway play “Wicked.” She sang, “Because I knew you, I have been changed for good.”

To conclude the program, attendees sang “Amazing Grace” and “God Bless America” directed by Moore and with piano accompaniment by Beth Shaw Malone.

Several former students, friends and others from different facets of Moore’s life shared comments about her.

Walnut Ridge Mayor Charles Snapp, a 1972 WRHS graduate, noted that Moore was a student teacher in 1972 and began teaching the next school year. Snapp spoke about her love of community and said, “We appreciate so much those who impact our lives. She’s impacted thousands of lives.” He also noted that she served as a music source, not only for the school, but for the community and region.

Rev. John Arnold spoke on behalf of First Presbyterian Church. He said of Darlene, “You expect people’s best, but in return, you bring your best.” He described her as “doggedly loyal and concerned about your kids. You see the excellence in your kids before they see it in themselves.”

Arnold added that Moore is a talented soloist, pianist and director and understands that sacred music is “truly about honoring God and drawing people into his presence.”

Gordon Moore of Hot Springs, a 1977 graduate of WRHS, said three people had impacted his love of music: his father Bud Moore, Clara Weir and Darlene. During his senior year of high school, when Gordon had no free class period for music, Darlene told him, “Don’t quit” and found time to allow him to continue in the music program.

Next, a letter was read from Joyce Rose, former WRHS counselor and a colleague of Moore’s for many years. She wrote, “Darlene’s multi-tasking ability always amazed me.” Rose also noted that Moore helped shy students overcome their fears.

Michael Brown, a student of Moore’s in 1993, recounted highlights of the mixed chorus trip that year to New York City, where the chorus performed at Carnegie Hall. The experience came about when Arkansas State University invited choirs from five area schools to perform as a mass choir. He noted that Tom Moore was a big part of fundraising for and planning the trip itinerary that included many highlights. Brown said he looks back on the experience with “immense pride.”

Jessica Coker Light had Mrs. Moore as a teacher from 1989 through 1993. She also attended the New York City trip and recited a poem she wrote about the experience, when 50 students and their leader board a plane for New York City in May of 1993.

Janet Shaw Smith, WRHS Class of 1979, said that during 12 years of Moore’s tenure she had members of the Shaw family, including sisters, Teresa and Beth, brother Blake, and nephew Matthew. “You shared your love of music with all of us.” She added that her brother, the late Blake Shaw, “would have loved to have been here.”

Malory Ditto, 2017 WRHS graduate, said “Mrs. Moore made me feel good about myself.”

Jerry Gibbens, retired from a teaching career at Williams Baptist College, said, “thank you, Darlene, for ever being my friend.” Their parents and grandparents were friends, and Jerry and Darlene have been friends most all of their lives, were both longtime members of the Lawrence County Historical Society and wrote grants for the restoration of several buildings in historic Powhatan.

Dan Mullen, a 1972 graduate, shared how Darlene volunteered her musical talents to provide music at the Rotary Club’s Sports Hall of Fame banquets.

Haiden Haynes, also a more recent student of Moore’s, said, “I never felt like I was Haiden, the disabled kid” in Mrs. Moore’s class.

Susan Weeks of Walnut Ridge spoke as a mother of two boys who were choir students of Moore’s. “She made such an impact,” Weeks said. “She is tough. She once broke her wrist and kept playing the piano – all the parts with one hand.”

Vicki Bennett Davis, a 1975 WRHS graduate, said that Moore has been part of her life over the years through school choral music, church choir and as a bus driver for school choral trips. “I’ve loved every minute of it.”

Connie Lane, a 2020 WRHS graduate said, “Mrs. Moore made me feel like I was one special kid.”

Engelken, one of the last speakers, described Tom and Darlene as “people of integrity.”